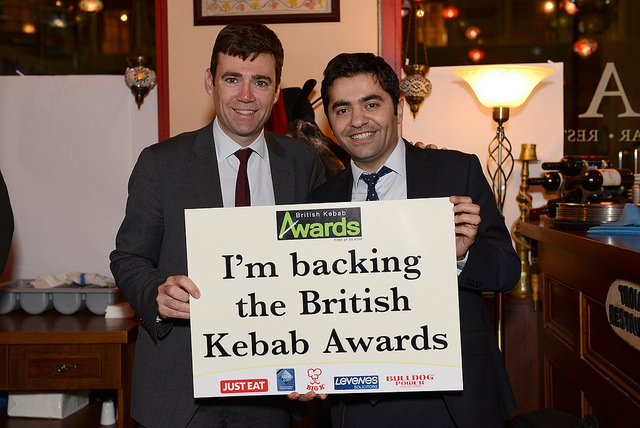 Preparations continue for the British Kebab and Retail Awards which will be held in the British Parliament on 21st January 2013. Conservative MP Nadhim Zawahi who will be the host of the event gathered with the advisory board members Onder Sahan and Altan Kemal in the offices at the parliament in order to evaluate the preparations.

Zawahi, excited by the upcoming event, stated that he informed the British media of this event as well as many MPs and ministers of the cabinet who will attend the reception on the 21st January. Zawahi explained how the doner-kebab businesses have spread to every region of the country and contribute greatly to the British economy. The British Kebab Awards will help aid this established industry achieve the recognition that it deserves.

The founder of Tas and Hazev Restaurants Onder Sahan stated that the awards will be an important milestone in the food industry. Sahan reminded us that the Kebab Awards will pioneer the first and the most comprehensive industry research and he invited business owners, particularly doner manufacturers and businesses to share their views and suggestions. Nadhim Zawahi expressed that he is a regular customer to the Tas and Hazev Restaurants and that he is pleased to be involved in the same event with Onder Sahan.

The meeting was held in the MPs’ offices at the Portcullis House. Financial consultant Altan Kemal having closely observed the growth of the kebab businesses commented that the kebab industry contributes billions of pounds to the British economy. Kemal continued to say that the industry employs not only Turkish and Cypriot entrepreneurs but also from other ethnic communities. Therefore the British Kebab Awards will attract great interest.

Members of Parliament and Members of the House of Lords as well as others can nominate candidates in the inaugural awards. Politicians and citizens who would like to nominate kebab businesses from their constituencies should contact the British Kebab awards on [email protected] or on 07438 393534.

The advisory board comprises of Onder Sahan, the founder of Tas and Hazev Restaurant chains, Osman Cinik, who established The Best Kebab in Stoke Newington in 1985 and introduced kebab to masses, and the experienced financial advisor Altan Kemal, as well as other industry representatives will determine the businesses to be awarded.

The results of the research on the financial scale of the doner-kebab industry will be announced as well as the awards will be presented at the ceremony on 21st January. The publication of the research results will be sponsored by the Docklands Academy.

For more information regarding the event please visit www.britishkebabawards.co.uk