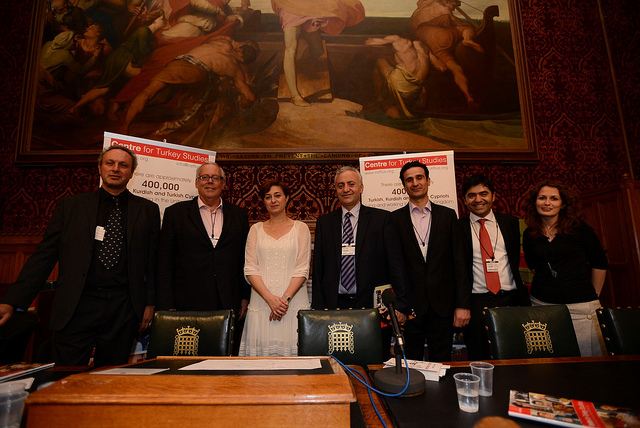 ‘THE BALCONY OF AUTHORITY: A BRIEF HISTORY OF THE NEW REGIME IN TURKEY’

Born in 1973 in Turkey, Ece Temelkuran is one of Turkey’s best-known journalists and political commentators. She has been a journalist since 1993 and has been writing political columns since 2000. Her investigative journalism and books broach subjects that are highly controversial in Turkey, such as the Kurdish and Armenian issues, the women’s movement, and matters dealing with political prisoners. She has published widely and was honoured many awards including the Pen for Peace and Turkish Journalist of the Year award. As a writer she has published 12 books. Two of her books: Deep Mountain, Across the Turkish-Armenian Divide and Book of the Edge have also been published in English. Her first novel Muz Sesleri (The Sound of Bananas) has recently been published in Arabic. Ece Temelkuran’s articles have been published in various newspapers and journals including Nawaat, The New Left Review, Le Monde Diplomatique, Global Voices Advocacy and The Guardian. In addition, Ece Temelkuran was a visiting fellow at the University of Oxford’s Reuters Institute for the Study of Journalism. She regularly writes for Al-Akhbar English.

The Centre for Turkey Studies held a debate with Ms Ece Temelkuran who gave a fruitful explanation on the current political situation in Turkey. She also gave insightful analysis on PM Erdogan’s so-called ‘balcony speeches’, conservatism in today’s Turkish society, and evaluated both the current legal cases on “KCK” (Unions of Communities in Kurdistan) and the “Ergenekon”.

Freedom of expression and the press

In Turkey, a new society has been created with the hegemony of conservative politicians. To explain this new society, Temelkuran highlighted a few points from Prime Minister Recip Tayyip Erdogan;

“I refer to these speeches by Erdogan as “Balcony Speeches”. This is because all of these speeches took place in the balcony of AKP’s headquarters in Ankara – it was on this same balcony that Erdogan celebrated winning the election in 2007 and said that “Now let’s say “one nation/nationality, one country, one flag and one state.” Those who don’t vote AKP are the country’s other colours.” In my article the following day, I wrote that the Prime Minister targeted those that didn’t vote for him. I was then subjected to intense criticism; because I was supposedly anti-AKP and also anti-democracy.”

Referring to Turkey’s agenda, which for some time has been engaged with the subject of KCK and Ergenekon operations, Temelkuran uses this to explain the AKP success in elections.

Temelkuran said; “Ergenekon is a Kemalist ultra-nationalist organisation whose members comprise of military and secret services. Some journalists and writers were accused of being part of this organisation and some were put under arrest.” She went on to emphasise that following the elections it is important to draw attention to some of points raised in these balcony speeches:

“Let’s come to the local elections in March 2009. AKP didn’t get the results they wanted. In Kurdish populated southeast Turkey, they didn’t get a satisfactory amount of votes and after AKP lost the elections in southeast Turkey, the KCK organisation emerged. This time it wasn’t the Kemalist elite that were viewed as the enemies of democracy, but the Kurdish ‘terrorists’. The Turkish state declared “KCK” as PKK’s (Kurdistan Workers party) Turkey arm and ordered an operation against Kurdish political activists. Of course, they dealt with this according to AKP’s perception. In the name of combating these Ergenekon and KCK operations, a series of mass arrests were launched. According to figures given by human rights organisations, these arrests increased by 100% compared to the previous year.”

Following Temelkuran’s speech there was a lively question and answer session.