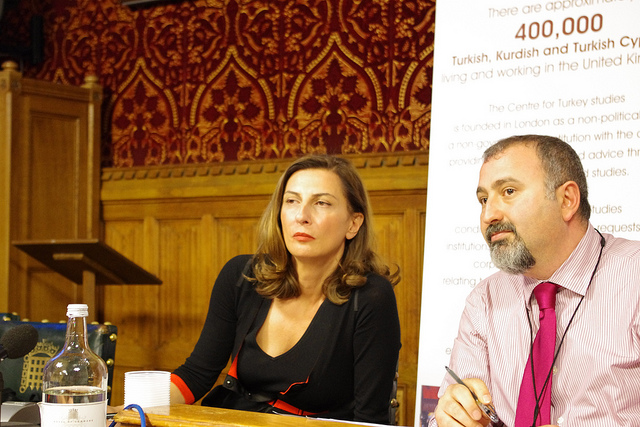 Nuray Mert is a well-known journalist and political scientist from Turkey. She is a lecturer at the Department of Economics at University of Istanbul, and writes regular columns for national newspapers on current affairs. She hosted a TV show on current and political affairs at a national channel, and this was taken off air after Recep Tayyip Erdogan publicly criticised her. She was also fired from the daily Milliyet earlier this year, due to her stance against the government’s actions. Nuray Mert has publicly expressed that she is now concerned for her personal safety.

The Centre for Turkey Studies hosted a forum with the acclaimed journalist and scientist Nuray Mert. Mert examined the issue of freedom of expression and restrictions on rights and liberties in Turkey. She suggested that the governing party, AKP, was promising in regards to ensuring religious liberties, especially removing the ban on wearing headscarf in public places. However, she continued, the government has represented a contradictory attitude when politically criticized and challenged. She argued that there are many people including journalists and students who have been imprisoned purely for political reasons by the government. Hence, she added, the power that the government achieved by democratic elections has not produced freedom of expression for all, but dictatorship for the centre.

Mert further argued that the ‘Kurdish problem’ would only be solved with peaceful negotiations with BDP (Peace and Democracy Party) and PKK, and without treating the Kurdish issue as a terrorism issue.

Lastly, Nuray Mert analysed Turkey’s approach towards the Syrian conflict in relation to Kurdish minorities in the region.

The audience in the packed committee room joined in the forum with many engaging questions about current Turkish politics.

The event was hosted by Seema Malhotra Labour MP.