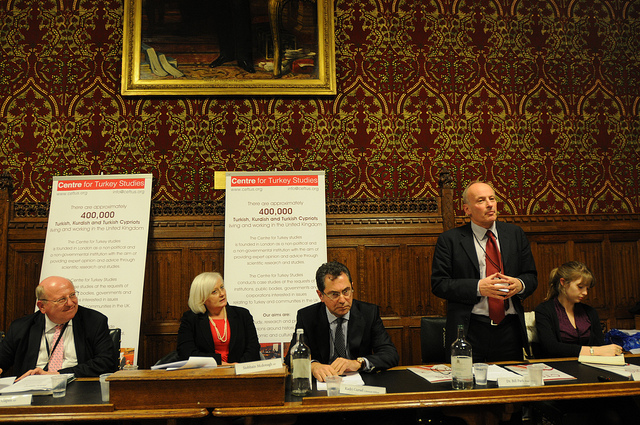 Kadri Gursel is a columnist for Turkish daily Milliyet since 2007. His main focuses are Turkish foreign policy, international affairs, Turkey’s Kurdish question, as well as Turkey’s evolving political Islam and its national and regional impacts.

Dr Bill Park is a Senior Lecturer in the Defence Studies Department at King’s College London. His research interests are Turkish foreign and security policy, Iraq and European security.

Turkey as a geographically and politically strategic country faces a number of challenges in a politically instable region – especially since the beginning of the Arab Spring in early 2010. And it is for this reason that Turkey’s foreign policy towards Syria and the uprising is of great importance. The Syrian uprising against the Bashar al Assad regime started in 2011 and transformed rapidly into a brutal conflict and an outright civil war. The fight against the regime and the President Assad’s perseverance have resulted in thousands of deaths, around 2,5 millions of internally displaced people and more than 100.000 refugees in the neighbouring countries. Turkey, in particular, is supporting the opposition against Assad and has become a host of thousands of Syrian refugees.  Also, Turkey was exposed to some cross-border attacks. Turkey’s foreign policy pursued a humanitarian and military approach to respond to the Syrian conflict.

The Centre for Turkey Studies hosted a panel with eminent speakers who examined the tension in the region and Turkey’s foreign policy regarding Syria.

Our first speaker Mike Gapes MP analysed the Syrian uprising and its implications for the region. He argued that the UN Security Council resolution has been slowed down by the Russian and Chinese vetoes, but Britain and France’s recent decision of supporting the newly formed Syrian National Coalition of Opposition Forces projects a potential improvement. Gapes stated that Turkey has been left alone by the UN and NATO in its efforts in handling the conflict; however the conflict is now also influenced by external involvement by Saudi Arabia, Kuwait and Iran.

Kadri Gursel examined the reasons and the results of Ankara’s foreign policy regarding Syria. Gursel claimed that Turkey made poor predictions about how the Syrian uprising would unfold. Turkey expected that the Assad regime would fall within months and that the U.S. and the UN would engage militarily in the conflict. Therefore, Turkey publicly supported the Syrian rebellion and the opposition group the Syrian National Council to be formed in Istanbul. Gursel also argued that Turkey did not take into account the divisions amongst the Syrian opposition. Turkey also needs to take into consideration the presence of the Syrian Kurds who are in close relations with the Iraqi Kurds. According to Gursel, Turkey approached Syria with interventionist aims rather than democratic values.

Dr Bill Park agreed with Kadri Gursel’s observations and focused on the question of Kurdish minorities in the region. Park stated that Turkey’s policy regarding the Kurds has been contradictory as Turkey objected a military action in Iraq in 2003 for fear of worsening the Kurdish problem and causing instability in the region. However, Turkey has called for military intervention on the Syrian conflict despite the existence of the Syrian Kurdish factor. Turkey now signals a move towards backing opposition against the Syrian Kurds as well in addition to the Assad regime. According to Park, the Syrian conflict will get worse even if  Assad leaves and the question that should be asked now is who will be ruling Syria in the aftermath of Assad’s removal.

The speakers’ observations were followed by an engaging question and answer session. Some guests in the packed committee room queried on the possibility and the benefit of a military intervention by the western countries, and asked about the future of Turkey’s relations with Russia. Some questions followed up on the ramifications of the Kurdish issue in the region.

‘Turkey’s Path to a New Constitution: Possibilities and Obstacles’