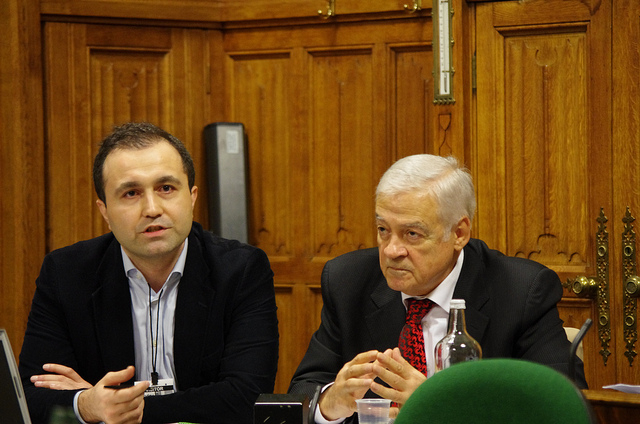 Dengir Mir Mehmet Firat stated that one of the key issues in Turkey is the question of citizenship. According to Mr Firat, the current outdated constitution does not have the concept of equal citizenship. While some sectiona of the society benefit from the rights guaranteed in the constitution others cannot take advantage of these rights, he said. Mr. Firat continued to say “changing the laws is not helping the citizens if you cannot change the minds of the people and politicians”. Today, he said, the Turkish penal code has over thousands of articles and regulations and while “Britain does not have a written constitution, it is a more advanced and democratic society”. In addition to the on-going constitutional debate in Turkey, Mr Firat also eluded on key issues such as the role of the state and politicians, and the challenges of the transition process towards a democratic state in Turkey.

Regarding how to solve the Kurdish issue, Mr. Firat expressed that PKK and the BDP have major flaws in the case of solving the Kurdish problem. Firat continued to say that despite significant shortcomings of the AKP government, it has taken important steps to solve the problem. He added “to shake hands, you have to open your fist.”  Firat said “In this country, more than 17,000 innocent people fell victim to the unsolved crimes. People could not travel more than three kilometres due to the application of martial law in the past. Today in Turkey, wherever you dig, you encounter human bones. Military courts were effective in forbidding speaking and writing in Kurdish. Today, however, the state channel broadcasts Kurdish for 24 hours on TRT-6. The government took the risk of sitting at a table with PKK in Oslo, but now we have just recently heard about the death of 30 soldiers. The government should not be the only side to be on trial to achieve effective security.”

On the issue of Kurdish language, Mr Firat said “The ban on native languages is not acceptable, and it used to be until the early 2000; it is one of the biggest crimes against humanity”. However, according to Mr Firat, the AKP government has taken great strides in improving human rights and pushing for further democratisation in Turkey since 2002. He continued to say “For me, the main problem is the citizenship. All-election campaigns promise more democracy and more freedom to collect votes. In the UK or any other democratic country there are no such promises during election campaigns. In Turkey today, there is no need to change the constitution because you are going to apply the laws to the people. Changing the constitution does not bring the expected result without changing the minds of the people”.

Olympic Athletes are waiting for support