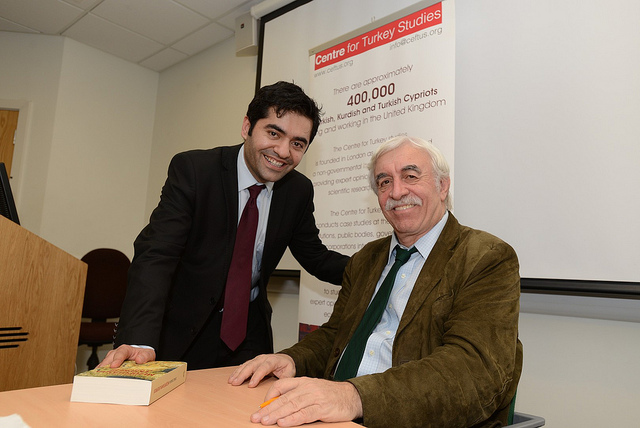 The eminent columnist and journalist Cengiz Candar launched his new book ‘Mezopotamya Ekspresi: Bir Tarih Yolculugu’ at an event at the School of African and Oriental Studies (SOAS) organised by the Centre for Turkey Studies. Candar made a speech addressing the Kurdish issue and the search for a peaceful resolution. He remarked that the process is similar to dancing on the ice, hence it is very fragile.

Former director of BBC Turkce, Mr Gamon Maclellan of SOAS chaired the event where Candar signed his new book for the guests and made a speech. Candar stated that the launch of the book has coincided with the MIT (the National Intelligence Organization) and Abdullah Ocalan meetings. He remarked that these meetings are very fragile and similar to dancing on the ice. He pointed out that the Imrali meetings should not be considered as negotiations, but a process of dialogue and added “We don’t know what will happen at the moment; we are only following the news. Everyone is confused. I do not believe that even the Prime Minister and Ocalan are not confused. There is no such dialogue right now, but that does not mean that there is no prospect for it. I think Ocalan is trying to solve the mystery behind the killings in Paris.”

Cengiz Candar pointing out the significance of Ocalan’s participation in the process stated “however, the meetings are now between two sides. One of them is Ocalan and the other is the head of MIT. Politicians also should take part in this process as it is a political matter. Two MPs from BDP met Ocalan so far and this is a good development.” Candar expressed that he finds the PM Erdogan’s attitude interesting as the PM does not usually tend to share the process with others; however this process is a first in the history of Republic of Turkey.

Candar referring to the ‘Arab Spring’ commented that the change that the Middle East is experiencing now is inevitable, but it is difficult to guess the extends of the regime change and the outcomes in Syria.

You can find more photos here.

What the eye doesn’t see: a national discourse on urban intervention, and Istanbul’s changing landscape