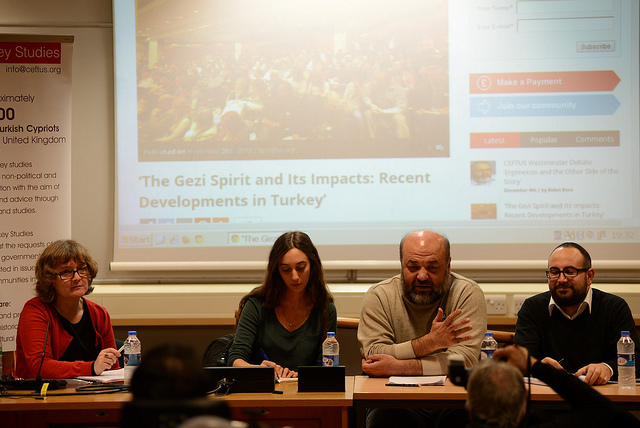 School of Oriental and African Studies (SOAS), University of London

Mr Ihsan Eliacik is an author and a thinker. Eliacik has been known for his anti-capitalist interpretation of Islam and his writings supporting the Anti-capitalist Muslims who actively took part in the Gezi Park protests in early summer this year. He holds a BA from Divinity Faculty of Erciyes University (1985-1990). He has been an independent author writing in a variety of publications for over 30 years. He wrote for magazines such as ‘Yarin’ for four years until its closure, ‘Soz ve Adalet’ for eight months where he was editor in chief, and ‘Gercek Hayat’ for two years until it closed down. He wrote 20 books published by the Insa Publications.

Sara Whyatt opened the discussion by stating that while she has witnessed various events throughout her study of Turkey, none as momentous as Gezi Park protests has ever been experienced. The young and the old joined together to protest using creativity and humour, with the disappearance of the decades old religious, secular and social divides that have plagued Turkey. She added that the questions remain for those who have been detained or imprisoned in violation of the right to free expression in Turkey.

Our keynote speaker, Ihsan Eliacik, took over and began discussing the meaning of the Gezi Spirit, and what he described as a ‘Gezi Dream’ that is hovering over Turkey. Eliacik suggested that many people expected protesters to fight each other, if the demonstrators in Gezi Park had remained for longer than 19 days. However, Eliacik stated that in those 19 days, people did not, and this is an example of the Gezi Dream and for those 19 days, the dream was realised. Eliacik attributed the Gezi Spirit as creating a new postmodern era which is post Kemalism and Kemalist elitism. In turn, he described five concrete concepts which not only demonstrate what the Gezi Spirit is, but also represent Turkey’s future which is a dream to be materialised. These five concepts were love for nature, freedom, respect, pluralism and anti-capitalism.

Eliacik touched on the love for nature humorously through Europe’s media coverage describing the protesters as ‘Barbaric Turks protesting for trees’. He then moved onto the second concept; freedom. He stated the youth were there to protect the existing freedoms they felt were being threatened. Eliacik discussed what was unique with Gezi and how they dealt with, when the freedoms of one group clashed with another.  As there were flags with Ataturk present, alongside those of PKK leader Ocalan and the Kurdish flag, the unique feature was the level of respect between the groups. Respect, the third concept, was demonstrated through the unitedness of all, regardless of sexuality, ideology and ethnicity. The ability to hold Friday prayers and to have women wearing headscarves protesting alongside secular individuals, Eliacik indicated, exemplified this high level of respect. He stated all the different flags which were on the Ataturk Cultural Centre in Taksim square, which PM Erdogan called ‘rags’, symbolised this. The pluralistic nature of the protests was the fourth concept. Eliacik stated that the pluralism and variety were to such a great extent, the differences between them balanced themselves out. With no government presence, yet such a high level of respect for plurality, this showed the possibility of the Gezi Dream being realised. He used the example of the variety of football fans using slogans which feminists deemed offensive. Threatening to leave if the clubs did not change the slogans, the football fans agreed to remove the slogans and thereby, the protestors in the park came to an agreement regarding signs and posters. Eliacik remarked that that was how a postmodern society could be. The final concept was the anti-capitalist nature of Gezi Park. Eliacik stated that the first thing that lost importance was money. Health clinics, libraries and food stalls were set up helping the protesters, free of charge.

Eliacik, explaining his stance and his interpretation of Islam with attributions to Marxism, stated that the ideal world would be a combination of no restrictions, no class, no exploitation and no war.

Referring to the recent corruption scandal in Turkey, Eliacik noted that any action against the incumbent government in Turkey will suffer from the same accusations that the Gezi protestors had to encounter. He added that any opposition against the current regime is for the best and will benefit Turkey’s future.