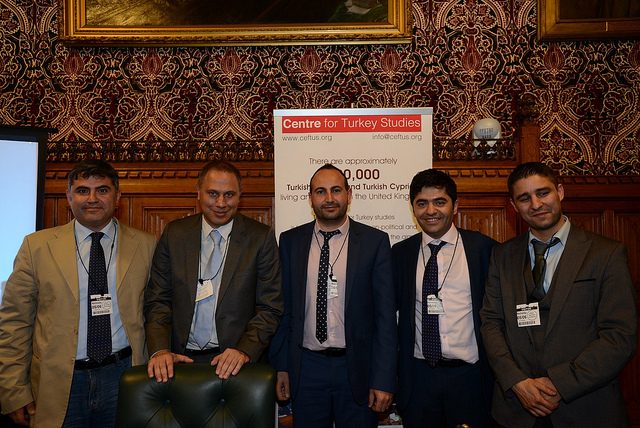 ‘FREEDOM OF EXPRESSION IN TURKEY DURING THE EU ACCESSION PROGRESS’

Prof Dr Yaman Akdeniz is Professor of Law, and vice-chancellor, at the Human Rights Law Centre at the Faculty of Law,IstanbulBilgiUniversity. Prof Akdeniz held a position as senior lecturer at theSchool ofLaw at theUniversity ofLeeds until 2009, as well as being a founder and director of Cyber-Rights.org, and is the co-founder of BilgiEdinmeHakki.org, a pressure group working in the field of freedom of information law inTurkey. His recent publications include Internet Child Pornography and the Law: National and International Responses (London: Ashgate, 2008); and Racism on the Internet (Council of Europe Publishing, 2010). Prof Akdeniz also authored the Report of the OSCE Representative on Freedom of the Media onTurkey and Internet Censorship (January 2010, available at http://www.osce.org/documents/rfm/2010/01/42294_en.pdf. For further information about his work please see http://cyberlaw.org.uk/publications/ and bilgi.edu.tr/en/directory/people/yaman-akdeniz/.

Dr Kerem Altiparmak is currently the Director of the Human Rights Centre at the Faculty of Political Sciences at Ankara University where he teaches human rights law. He has worked with a number of human rights NGO’s inTurkey. At present Dr Altiparmak is working with the Human Rights Joint Platform on respectively ‘Monitoring of the Implementation of the ECtHR Judgements inTurkey’ and ‘From Impunity to Accountability’. His research interests include ECHR, freedom of expression, prohibition of torture, theories of rights, and impunity. Dr Altiparnak English publication include “The European System for the Protection of Human Rights in Crisis: The End of the Road?” (2009), “Human Rights Act: Extra-territorial Application” (2008), “Internet: Restricted Access – A Critical Assessment of Internet Content Regulation and Censorship in Turkey’ (with Yaman Akdeniz), “After Sahin: The Debate on Headscarves is not Over’ (with Onur Karahanogullari, 2006), “Bancovic: An Obstacle to the Application of the European Convention on Human Rights in Iraq (2004), “The Application of the Concept of Continuing Violence to the Duty to Investigate, Prosecute and Punish under International Human Rights Law (2003), and 21-25 Turkish Yearbook of Human Rights, Volume 3.

The Centre for Turkey Studies hosted a Westminster debate on the Freedom of Expression in Turkey Light of Turkish EU Aspirations. Our keynote speakers Dr Kerem Altiparmak and Professor Dr Yaman Akdeniz, both practitioners of law, addressed the issue with one eye on the current demonstrations and fast paced developments in Turkey.

Dr Kerem Altiparmak started his talk by comparing and contrasting the current situation inTurkeywith the late 1980s and 1990s. He asserted that although there have been good deal of improvement in regard to human rights, there are lingering concerns about the transparency of the AK Party’s reforms. He claimed thatTurkeyhad come a long way from a period in which people were often tortured systematically, with Kurds and Socialists feeling the brunt of government actions.

According to Altiparmak, AK Party reforms until 2005 / 2006 were moving in the right direction and the government were, to a great extent, complying with human rights concerns in accordance with EU aspirations. Up until 2009, developments in regard to freedom of expression were also on the right road. But, claims Altiparmak, the government began taking control of state institutions and sub-bodies in less visible manner. He gave as an example the way in which the AK Party began to control universities. In this sphere, it was not legislation but memorandums and diktats from government which impacted on speech and action on university campuses. Alcohol, for instance, was banned from university sites through such a memorandum. Although there was no legal obligation, universities knew that they had to comply with these government orders. Similarly, the introduction by Turkey’s Higher Education Board (YÖK) of 2 new courses on the Quran and the Life of the Prophet (Muhammad) should be interpreted in the same manner, as impositions which, for the large part, happen behind a visible spectre.

It is in this way, and with these new overarching tendencies, that the government began to become more forceful in the imposition of blasphemy, demonstration, and anti-terror laws in Turkey. Already weak checks and balances, which for instance mean that you can legally say anything about or insult LGBTs and ethnic minorities, meant that the government became more forceful in the imposition of their will without the need to change laws. This had a negative impact on what could be or could not be said.

Prof Dr Yaman Akdeniz, a long time legal cyber activist, gave some pertinent examples of cases pertaining to freedom of expression that he, and Altiparmak, have brought to Turkey’s courts. Among them were cases which aimed to de-sensor the music sharing site Last.fm and video sharing site YouTube. Although unsuccessful in his attempts, both sites are now no longer blocked, albeit with provision.

Akdeniz pointed to many laws, in particular to Law No. 5651 on Regulating Broadcasting in the Internet and Fighting against Crimes Committed through Internet Broadcasting, as the way in which internet sites came to be banned. Law number 5651, for instance, works on the provision that “parliament has the duty to protect our families, children and youth.” A law, according to Akdeniz, is often stretches its stated intentions.

Akdeniz notes that the current lack of interest by the Turkish public in EU means that any development on this front doesn’t even make it into the news, which of course means that the government is less liable to follow requirements related to EU accession. Although accession negotiations can and did impact on AK Party’s conduct in the area of freedom of speech, Akdeniz noted that the media, in general, has moved through three stages influence recent times: military, Gulen movement, and now AK Party.

Akdeniz also gave the Richard Dawkins website ban as an example of censorship based on government leanings; a ban which was lifted after a year of legal action. Another important development, according to Akdeniz, was the EU ruling in favour of Ahment Yildirim vs.Turkey, who could not access his academic site because a Denizli Criminal Court ordered the blocking of a whole Google blogging platform because of the content of another blog which was alleged to have insulted Kemal Ataturk. Akdeniz has also tested Turkey’s court system by making applications to remove the ban on adult content like Playboy.

Prof Dr Akdeniz added that he believes that a structural change needs to occur: amending the constitution might have an impact but there is a political element to issues pertaining to freedom of speech. Without a change in the culture of governance, law changes might amount to little or nothing.

In regard to the current situation and demonstrations in Turkey, Akdeniz tentatively noted that it will be interesting to see how the Turkish Constitutional Court will respond to potential charges against people who tweeted from the site of protest.