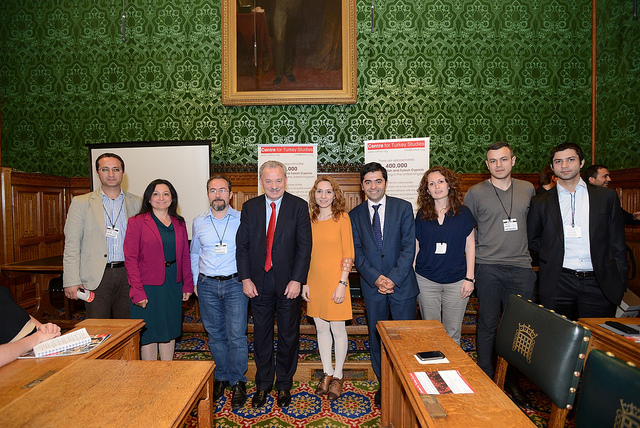 ‘LONDON’S KURDISH AND TURKISH COMMUNITIES: HOW DO THEY RELATE TO BRITAIN AND TO TURKEY?’

Chair: Andy Love, the Labour and Co-operative Party Member of Parliament for Edmonton

The Centre for Turkey Studies hosted a Westminster Debate on London’s Kurdish and Turkish Communities. Our keynote speakers Dr Ipek Demir and Dr Dogus Simsek analysed how these communities relate to Turkey and Britain.

Dr Dogus Simsek, who has carried out an ethnographic research on second generation Turkish and Kurdish migrants in London since 2009, presented some of the findings from her research. Simsek stated that she analysed how/why these migrants connect with the homeland and the host country, and their relations to North London, London in general and Turkey. She indicated that second generation Turkish and Kurdish migrants feel more connected to homeland culture rather than British culture. However, she said, their connection with the homeland is through their parents who had settled in North London. Therefore, the second generation migrants consider particularly North London as home. Simsek speaking about the migrants’ relation to London in general said that they feel good about the diversity of London although they realise internationality of London when they attend university outside North London.

Dr Dogus Simsek argued that the second generation migrants do not have a direct link with Turkey where they generally go for summer holidays at their parents’ hometowns. She added that they do not feel included in Turkey not only due to being unable to speak mother-tongue well, but also some of them feel that they are perceived as the problematic outsiders whose parents sought asylum abroad. Simsek concluding her talk stated that second generation migrants identify North London and London as home, not Turkey.

Dr Ipek Demir shared some of the findings of her academic work called ‘Battling with Memleket in London: The Kurdish Diaspora’s Engagement with Turkey’. She began her talk with some facts on the history of migration from Turkey to the UK. She stated that in London, the majority of those from Turkey were Alevi Kurds, mostly originating from Malatya, Maras, Elbistan and the surrounding region.  However, she pointed out that the number of Kurdish people (from Turkey) living in London is a rough estimation (somewhere between 100.000 and 180.000) as the Home Office asks refugees about their country of origin, not their ethnic background. 2011 census figures are also unreliable as new migrants are reluctant to complete the census (mostly due to informal living arrangements) or otherwise fall through the gaps. Demir argued that despite their numbers and highly political stance, debates over Muslim minorities, race and ethnicity in the UK do not seem to pay enough attention to the Kurdish and Turkish communities in London. These communities usually remain ‘invisible’ in UK public policy. She called on this to change.

Demir stated that various issues in Turkey – especially ethnic conflict, sectarian discrimination (being Alevi) and economic deprivation, which some Kurds faced – reinforced one other, and paved the way for Alevi Kurds, even those who were not immediately involved in the Kurdish conflict, to migrate to the UK. Kurdish (chain) migration to the UK should therefore be understood as a mixture of these issues buttressing one another, hence challenging the separation made in media and popular discourse in the UK between political (‘genuine’) asylum seekers and economic migrants (‘bogus’ asylum seekers). Kurds show that this simplistic distinction does not hold. Political and economic reasons for seeking asylum can be intertwined.

Demir argued that many migrants from Turkey began identifying themselves more as Kurdish (instead of, for example, as British) over time. She suggested that this increasing tendency of political identification with Kurdishness was due to ‘what was going on in Turkey’, namely uncompromising Turkish state policy towards Kurdish rights and demands. Kurds in the UK have stepped up the battle with Turkey since the 1990s, in tandem with the growing intensity of state violence and the Kurdish struggle in Turkey. However, she also pointed out that despite this battle with Turkey, Kurds in London, on the whole, saw Turkey as ‘memleket’ (can be translated as homeland), and still continued to have warm and intimate ties with Turkey.

Demir also drew attention the fact that the second generation of Kurds in London might pursue a different track than their parents. She argued that newer generation of Kurds might abandon ‘memleket’ feelings towards Turkey, and perhaps develop a stronger ethnic identity than their parents and intensify the battle with Turkey, especially if the Kurdish issue in Turkey continues to be unresolved and peace is not secured.  More importantly, she drew attention to the danger that the second generation might end up joining the rest of the alienated youth of immigrant communities, living in deprived neighbourhoods of London. That is, they might move away not only from Turkey but also from Kurdishness and may become part of the wider alienated youth living in deprived ‘ghettos’, attending poor schools, and having poor life chances. She argued that there needs to be life beyond the ‘kebab economy’ and the ‘informal economy’ and that a lot fell, not only on their own community (parents and community leaders), but, more importantly, on the UK (councillors, politicians, schools) to develop strategies and policies. Aspirations as well as the actual life chances of the new generations need to be increased. The community needs to be provided ‘not equality of opportunity’ but ‘equality of resources’.

Andy Love MP who chaired the event contributed in the discussion with his observations from his constituency, Edmonton where majority of Turks, Kurds and Turkish Cypriots live. Love emphasized the value of finding common grounds in order to create integrated communities in London and in the UK.