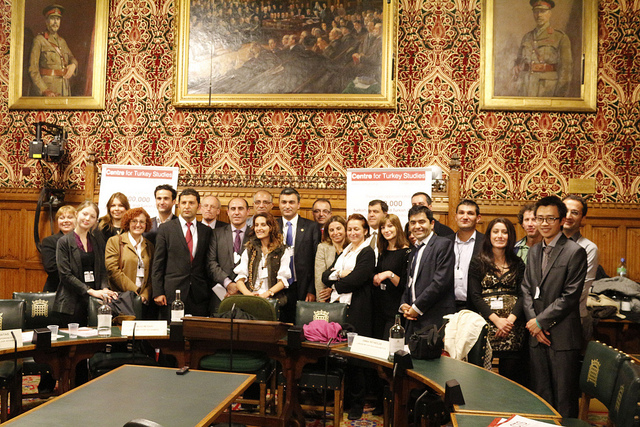 Religion, Society and Politics in a Changing Turkey

Turkey has been transformed rapidly and drastically in the last decade thanks to the stability of one governing party instead of the coalition governments of the previous decades. The governing AK Party supported by the majority of the public has implemented a great number of new policies and legislations regarding social, political and religious life in Turkey. The rapid transformation that Turkey is going through has been both praised and criticised by different interest groups in Turkey. On one hand, it has been suggested that the positive economic development of the country has had fruitful implications for the social and political advancements for the people of Turkey. On the other hand, it has been argued that the society has been deeply polarised due to the governing party’s policies on secularism.

Our first keynote speaker, Binnaz Toprak MP of the Republican People’s Party (CHP) which is the main opposition party in Turkey, analysed Turkey’s changing face in the context of religion, society and politics. Toprak referred to her co-authored report with Ali Carkoglu published by TESEV in 2006. One of the key findings of the extensive report, she stated, is that Turkey has been so polarised that there are two Turkeys in Turkey. One identifies itself with secularism and the other with Islamism. Secularists equate modernisation with westernisation and are more republican in Turkey’s context. Toprak suggested the understanding of modernisation by the governing AK Party which has Islamist roots, however, differs. She stated that the governing party associates the concept of modernity purely with economic development. The cities of Turkey have been modernised with financial developments such as building new roads and bridges, however Toprak argued that the people and the political system have become more conservative. She added that people who do not tend to have such understanding of modernism and belong to certain religious groups are less likely to find employment, particularly in Anatolia. Toprak acknowledged the achievements of the current Prime Minister Erdogan and his government in the last decade. Nevertheless, she argued that the PM’s style of governance which has become quite interfering in almost every issue and the restrictions on the freedom of speech are worrying. She finally argued that the judiciary is not independent anymore as the controversial Ergenekon Case does not follow the rule of law.

The Hate Crime Legislation Campaign Platform (in Turkey) website defines hate crimes as ‘message crimes’ which reach beyond the victim and make the victim’s group feel unwelcomed in the community. This message carries its psychological consequences, such as fear, depression and anxiety. The platform says that as a result of this message the members of the group can feel marginalized, suffer from psychological trauma and may even commit suicide. Turkish-Armenian journalist Hrant Dink, who was fatally shot in front of the headquarters of the bilingual Armenian weekly Agos in 2007, was one of the most publicized victims of hate crime in Turkey, as he was killed because of his ‘Armenian’ identity. As there is currently no legislation on hate crimes in Turkish law, criminal cases issues are often left unresolved and criminals generally go unpunished.

Assoc. Prof. Dr. Aykan Erdemir examined the Hate Crime Legislation Campaign in Turkey following Toprak’s speech. Erdemir stated that the ‘hate crime’ topic is new to the Turkish public as it has not been discussed as an issue in Turkish politics yet. However, he said that the Socialism for Social Change Organisation (Sosyal Degisim Dernegi) brought together 70 NGOs for the Hate Crime Legislation Campaign. This non-partisan organisation aims to create an awareness of the issue in the Turkish Parliament, identify the grounds of hate crimes and pass legislation for all vulnerable groups. Erdemir expressed that only CHP, BDP (Peace and Democracy Party) and some right-wing MHP (Nationalist Movement Party) MPs supported the campaign at the parliament. Erdemir argued that the Hate Crime Initiative includes two challenging issues. One of which is in relation to sexual orientation and LGBT people. The other one is the distinction between hate crimes and hate speech. According to Erdemir, the incumbent governing party has no interest in the former issue and only supports the hate crime legislation against Islamphobia. Erdemir suggested the Prime Minister has argued for a more authoritarian law against Islamphobia which is almost a blasphemy law. Therefore, he added, such legislation by this government could have dangerous implications for the non-Muslim and non-religious groups.

Following the speakers’ insightful speeches, the guests in the packed committee room joined in the discussion with comments and questions. One of the guests commented that Turkey has improved in the last decade and it cannot be suggested that Turkey was much better before the AKP government as Turkish politics turned a blind eye to the Kurdish issue and the Armenian issue. Another guest asked the speakers their interpretation of the consecutive success of the AKP government in the last decade. Toprak argued that CHP has suffered animosity as it is the founding party of the Republic and added that AKP’s major success is de-strengthening the Turkish military and working on the Kurdish issue. However, she suggested, the government discriminates against the Alawis with local policies. Erdemir expressed that CHP is associated with the religious ‘other’ and is accused of being ‘elitist’. Nevertheless, CHP is a progressive party with new implementations against the AKP movement.