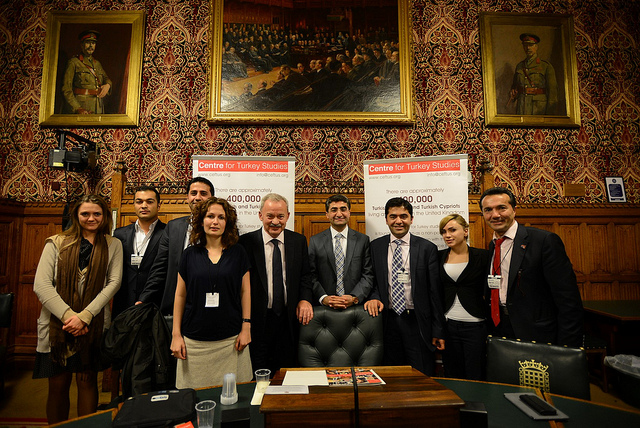 Mehmet Emin Ekmen is AK Party Deputy Chairman of Party Organisation and former MP for Batman. He was a member and secretary of the Wise People Commission for the Southeast Region on the Kurdish Peace Process. He studied law at Dicle Universtiy and he holds an MA in Public Law in Social Sciences Institute of the same university. He is currently a PhD candidate in Public Law. Ekmen was a member of Batman Bar Board, and Chair of Human Rights Commission and Women and Children Rights Commission when he used to work as a lawyer. He was a Representative of TEMA Trust, Director of Batman Volunteers for Environment Association, Chair of Gunisigi Association Board, Batman Representative of Sports Federation for Everyone and lastly, a founding member of Batman Mazlum-Der Association. Ekmen is currently a member of AK Party General Central Disciplinary Board and Deputy Chairman of Party Organisation.

Centre for Turkey Studies held another timely Westminster Debate on the recent developments in Turkey. Mehmet Emin Ekmen spoke on the historical, political and social necessities behind the current government’s recent Democratisation and Reform Package and detailed the content of the package with a view to open a debate with our guests.

Ekmen argued that there has been a variety of obstacles preventing Turkey’s democratisation process including the state ideology of the early Republican years and the other political parties of Turkey. Ekmen, referring to the earlier reform packages by the AKP government, stated such reforms initiated structural changes in Turkey.

Ekmen indicated that the incumbent government took a number of constructive steps regarding the Kurdish issue and these not only promoted “the political rights and liberties of the Kurdish population but also sought to improve their living standards.” Ekmen stated that the ‘Wise People’ Commission revealed that the majority of society wishes peaceful solution and supports the government’s reconciliation efforts.  However, he pointed out that “… An interesting fact was that the terrorist organization suspended its withdrawal from Turkey into Iraq just as the Gezi Park protests began. During the protests, PKK operatives perpetrated almost 30 crimes such as kidnappings, car burnings, attacks against construction sites and banditry. These incidents aggravated the concerns of social groups who kept their distance from the reconciliation process from its onset.”

Ekmen subsequently went through the proposed reforms of the 2013 Democratisation Package and elaborated on some of the most controversial ones. Please see below for excerpts from his speech on these controversial items:

Article 42 of the Constitution prevents public schools from instructing non-Turkish students in their native languages. The government would fail to take additional steps as long as this article remains in the Constitution. Furthermore, we must recognize that the state is ill prepared to facilitate non-Turkish instruction in public schools, especially with regard to developing the necessary curricula and providing adequate training to teachers. Nonetheless, the government demonstrates its lack of reservations against native-language education by allowing private schools to instruct students in non-Turkish languages.

This reform represents yet another step in pursuit of strengthening the presence of the Kurdish language in public culture. As such, it builds upon previously adopted measures such as the establishing of academic departments in Kurdish Language and Literature, the creation of a Kurdish-language state television station, the introduction of Kurdish-language services from state-owned Anadolu News Agency, the establishment of a Kurdish-language Communication School at Dicle University, and the decision to legalize the Mesopotamia University Fund which aims to teach in Kurdish.

In terms of the three options for the electoral system:

The government has tabled two options for electoral system reform: First, the Narrow Constituency Model would impose a 5-percent electoral threshold and divide a total of 550 Parliament seats into constituent areas with 5 MPs each. Second, the Narrow Constituency Model would divide Turkey into 550 constituent areas and designate each MP to approximately 100 to 110 thousand voters. I must say that the best option for our democracy would require all MPs to compete rigorously. Therefore, with this system the electoral threshold is removed.

Both of these options remove the inequalities embedded in the representative system that the BDP (Kurdish nationalist party in parliament) has been criticizing.

Three additional measures should follow these reforms: First, eligibility requirement for state aid should go down to 3% from 7%. Second, a coalition system should be established.  Lastly, and most significantly, Turkey should remove existing restrictions on political party membership in Article 11 of the Law on Political Parties.

The reform package may be contested and criticized with regard to its contents on individual rights and liberties among other issues. However, the package marks a revolutionary addition due to its proposed changes to the electoral system and promotion of individual politics. The Prime Minister has repeatedly said that this package is not the last of its kind and that he expects political parties to compete over democratization. Without doubt, lowering the electoral threshold to 3% would boost the eagerness of smaller political parties to participate in elections and help further diversify Turkey’s political scene.

Meanwhile, KCK-related arrests continue due to a lack of much-needed reforms in the Turkish Criminal Code and the Counter-Terror Law.

Reforms in the Turkish Criminal Code and the Counter Terror Law are essential to the successful culmination of the Kurdish reconciliation process. The PKK’s failure to complete the withdrawal of its forces and the organization’s continued recruitment efforts help account for the absence of these reforms in the democratization package. The PKK must encourage its members to return to their homes, while the government must develop an open-door policy to the returning members.

Currently, there is no consistent stance against non-violent struggle. It is thus possible that the government refrained from reforming these laws before the PKK clarified its attitude and policies. It would not be sensible for the government to target these laws before the “armed organization” terminates its operations. We know that the PKK’s unwillingness to disband caused previous efforts by the government to facilitate the return of armed militants to prove inconclusive.

To be honest, I do think that reforming the said laws without a clear sign from the PKK indicating their intention to lead their members back home and participate in non-violent politics would weaken the broader population’s confidence in the process. Abandoning violent struggle would automatically render the Counter-Terror Law redundant and make it inevitable for a reform of the Criminal Code. However, one cannot expect a sovereign state to simply eliminate its laws regarding illegal armed organizations.

A final word about the democratization package: The current reform package is the best possible effort under this Constitution. In the future, Turkey will draft a new Constitution and ratify certain international agreements regarding the issue.”

The debate was finalised with comments and questions from the audience in the packed committee room.