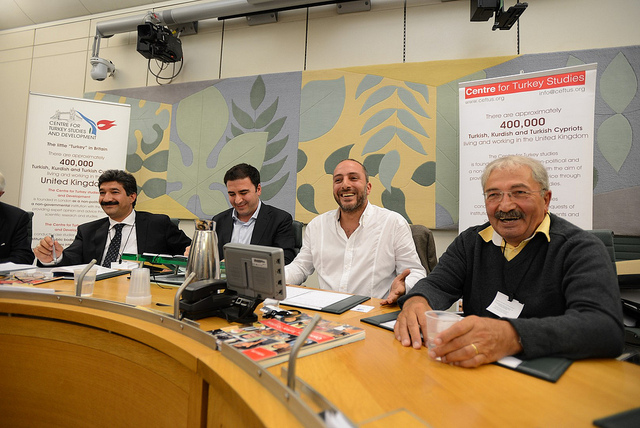 Abdurrahman Kurt is a former AKP MP for Diyarbakir and member of the Wise People Commission on the Kurdish peace process. Kurt is a founding member of Diyarbakir History Culture and Tourism Organisation and Diyarbakir Tourism Organisation. Kurt completed Civil Engineering BA at YildizTeknikUniversity and Economy-Politics MA at BeykentUniversity. He worked as an engineer in various positions and levels in different municipaities of Istanbul. He volunteered in various NGOs such as Mazlumder. He was the founding chair of the Gonul Koprusu which produced projects to assist children and families in poverty. Kurt was AKP Provincial Chair for Diyarbakir (2004-2007) and AKP MP for Diyarbakir (2007-2011). Also, he was spokesperson for the Parliament’s Human Rights Commission, chair of Interparliamentary Turkey-Lebanon Friendship Group and member of the Gender Equality Commission.

Hayko Bagdat is a columnist for daily Taraf and presents “Azı Karar Çoğu Zarar” TV programme with Roni Margullies on IMC TV. Bagdat is an activist and one of the founders of the “Hrant’s Friends” initiative following the assassination of Hrant Dink. Bagdat has a BA in History of Turkish Language and Literature from Istanbul University. He was conscripted in Tunceli where the war was intense between 1996 and 1998 before his graduation. In 2002, he worked as a columnist at Nor Marmara which is the oldest Armenian newspaper. Bagdat produced and presented “Sözde Kalanlar” which focused on minority problems in Turkey on Yasam Radio in 2003. He took part in a project of establishing a radio station to broadcast in Armenian language in Turkey. Bagdat was nominated to be a BDP (Democracy and Peace Party) MP for Istanbul 2nd Region in the 2010 general elections. Bagdat frequently comments on human rights, minority rights, the Kurdish issue and recently on the Gezi events on written and visual media.

Centre for Turkey Studies hosted a Westminster Debate with Mr Abdurrahman Kurt and Mr Hayko Bagdat on the future of plurality in Turkey and the peace process. The debate took place following the news that the PKK (Kurdistan Workers Party) halts withdrawal from Turkey on the 9th September 2013. According to news reports, the PKK claimed that the government of Turkey failed to keep its promises in accordance with the agreed peace process and the PKK will stop withdrawing its fighters although they maintain a ceasefire.

Mr Abdurrahman Kurt began his speech with an evaluation of the history of the Republic of Turkey. He indicated that the republic, following the collapse of the Ottoman Empire, was founded on the Western concept of nation-state. However, the republic failed to reform itself and took a longer while than its western counterparts to proceed to the multi-party period. He added that democracy in Turkey, even after the transition period in 1950s, suffered from military interventions up until the 2000s. Kurt stated that the military legacy of guardian state has been the root cause of many problems in Turkey and the AKP government, aiming to advance democratisation, demilitarised the state apparatuses.

Mr Kurt, pointing out that the religious and ethnic minorities had suffered greatly in the hands of the military guardian system, claimed that the AKP government had to remove this system in order to solve the Kurdish issue. He stated that constitutions cannot be changed by only one party although the AKP government led the way to a possible new constitution and the PM Erdogan had suggested amendments on various articles such as the definition of citizenship in the constitution already back in 2005. Following this point, Kurt, quoting Tarik Ziya Ekinci’s ‘Vatandaslik Acisindan Kurt Sorunu ve Bir Cozum Onerisi’(Kurdish Issue in relation to Citizenship and A Solution Proposal) (1997), listed the political demands of the Kurds. These are amendments to the Citizenship Law,  the Law on Associations and Political Parties, the Law on Demonstrations and Meetings, the Law on the Duties and the Authorities of the Police, Anti-terrorism Laws, National Education Law, Universities Law, Radio and Television Law, and introducing laws to empower local authorities and to implement Kurdish language education in state-run schools. He indicated that the current government has managed to reform most of these laws since it came to power. Kurt, however, stated that education in mother-tongue is the government’s red line in the peace process although he disagrees with it.

Kurt also claimed that the Kurdish political party, BDP (Democracy and Peace Party), in the peace process remains under the shade of the PKK which represents the armed struggle. Hence, he said, BDP’s failure in taking initiatives results in slowing the process.  Kurt concluded his speech that the AK Party is the only political party to resolve the Kurdish issue despite the setbacks.

Following Mr Kurt’s speech, Mr Hayko Bagdat also commented on the foundation of the Republic of Turkey. He stated that the different ethnic and religious groups of the early 1900s in Turkey almost vanished for the implementation of the ideology of Turkish-ness. He continued to say that Turkey became the only Muslim country in the world which has the least number of Christians although Anatolia is one of the homes of Christianity. The number of the old residents of Anatolia who were non-Muslim and non-Turkish decreased drastically. According to Bagdat, the Kurds of Turkey, fighting in the last 30 years, fear the same destiny of almost extinction in Turkey. Bagdat asserted that the military guardian system must apologise to its people who demand their dignity. He added, referring to the definition of citizenship in the possible new constitution, the four political parties in the constitution commission in the parliament must stop their efforts in redefining people’s identities. He stated that people already know who they are, but the state fails to acknowledge these identities as well as their realities.

Mr Bagdat finished his speech with hopeful remarks regarding the peace process. He pointed out that peace is the strongest side on the negotiation table and that both sides are aware of taking the dire responsibility of more funerals if they leave the negotiations.