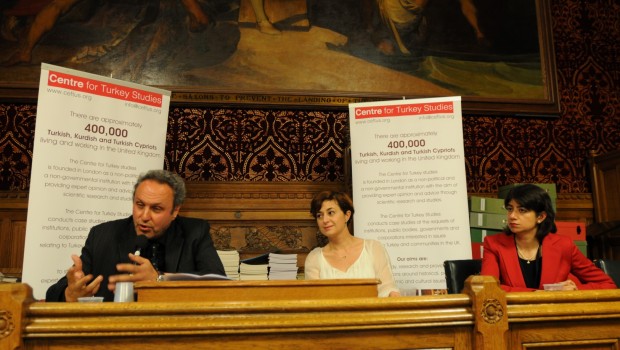 The Centre for Turkey Studies hosted a Westminster Debate with Ms Ece Temelkuran on the recent events in Turkey. The debate was kindly chaired by Dr Tunc Aybak. The committee room 10 at the House of Commons was packed with members of Turkish, Kurdish and Turkish Cypriot communities as well as British journalists, academics, politicians and authors.

Ece Temelkuran who had been to the protests in Istanbul and Ankara in the last few weeks shared her experience and portrayed the Gezi Park protests.

Temelkuran began her speech by saluting the people who were on the streets in the last weeks. She stated that the mostly young protestors did not yield and stood together despite the Turkish Prime Minister, Recep Tayyip Erdogan’s perpetual insults and the police brutality. She noted that these protests were not a resistance of ‘a bunch of looters’ as only 4 cities out of 81 cities of Turkey did not join in solidarity protests with Gezi Park resistance.  Temelkuran said that the protests made Turkey’s ‘post-coup d’état apolitical generation’ realise their power to encounter fear and love each other. Temelkuran recommended going to Taksim in order to get a sense of this novel protest, one that dismisses ideological labels and is spontaneous without any conventional leadership.

Temelkuran, speaking about the reasons why the protests lasted for days, stated that the protests started with environmental concerns, but it continued due to excessive use of force by the police. She said that the police brutality triggered further protests, and masses gathered spontaneously as a reaction to the heavy-handedness of the police and humiliation by Erdogan. However, she said, it should be noted that the PM has been dismissing some sections of the society not only in the last weeks, but in the last 10 years. Temelkuran added that some protestors on the streets have some family or friends imprisoned due to voicing opposition against the incumbent government. These people include students, journalists, trade unionists and academics.

Temelkuran referring to the PM’s speeches argued that the PM himself polarised society during these protests. She continued to argue that some incorrect information was given in his speeches, especially in the speeches after his return to Turkey from his visit to Africa. Erdogan claimed, she said, that some protestors went inside a mosque with shoes on and drank alcohol. However, this has been denied by the mosque’s muezzin and imam.  Temelkuran added that the claims like women with headscarf were abused in Taksim and a policeman was killed by the protestors were incorrect too. She stated that many protestors were women who were abused by the police regardless of their religious beliefs, and that the policeman’s family gave a testimony that he fell off a bridge. Temelkuran expressed that such provocative, but untrue claims led to further polarisation in the society.

Considering the protesters ranged from anti-capitalist Muslims to Kurdish activists, Temelkuran noted that the protests should not be conveniently identified as secularists versus Islamists. However, she argued, that the international media have chosen to represent the protests as a matter of Islam versus Kemalism. Therefore, calling the protests ‘Turkish spring’ is not only lazy but also an imperialist approach. She added that the protests are almost treated like a Hollywood film by the Western media and that they are now trying to name their currently favourite film. On the other hand, Temelkuran pointed out that the mainstream media in Turkey failed to cover the protests, extensively and objectively.

Temelkuran, commenting on the reactive humour and art in the last few weeks, expressed that “the wall of fear fell and people rushed to produce art and humour. People fell in love with each other and Turkey fell in love with herself.”

Seema Malthotra MP who kindly hosted the event congratulated the work of CEFTUS. She stated that the last few weeks in Turkey prove that there is a strong need for dialogue in Turkey and among the communities in the UK. Hence, she added, organisations like CEFTUS would bring the communities together and keep them close to the leaders of their countries.

The Chair of the Human Rights All-Party Parliamentary Group Ann Clwyd MP also joined in the debate and made a short speech. Commenting on the Taksim protests, she said that peaceful protests should be allowed in a democratic country.

Lord Hylton was among the guests in this event.

Ece Temelkuran is one of Turkey’s best-known journalists and political commentators. She has been a journalist since 1993 and has been writing political columns since 2000. Her investigative journalism and books broach subjects that are highly controversial in Turkey, such as the Kurdish and Armenian issues, the women’s movement, and matters dealing with political prisoners. She has published widely and was honoured many awards including the Pen for Peace and Turkish Journalist of the Year award. As a writer she has published 12 books. Two of her books: Deep Mountain, Across the Turkish-Armenian Divide and Book of the Edge have also been published in English. Her first novel Muz Sesleri (The Sound of Bananas) has recently been published in Arabic. Her recent novel ‘Dugumlere Ufleyen Kadinlar’ was published in February, 2013. Ece Temelkuran’s articles have been published in various newspapers and journals including Nawaat, The New Left Review, Le Monde Diplomatique, Global Voices Advocacy and The Guardian. In addition, Ece Temelkuran was a visiting fellow at the University of Oxford’s Reuters Institute for the Study of Journalism. She regularly writes for Al-Akhbar English.