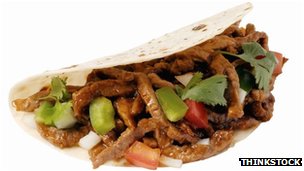 Some 70,000 people work in the kebab industry, according to estimates
Eighty MPs have got together to launch a competition in praise of one of the UK’s favourite delicacies: the kebab.
Restaurateurs and industry figures attended a reception in Parliament, with Turkish Delight, in Chorlton, Greater Manchester, named best venue in the British Kebab Awards.
Tory MP Nadhim Zahawi, who co-organised the competition, said the kebab was a symbol of “entrepreneurial” spirit.
The industry was worth more than £2bn a year to the economy, he added.
The first kebab shop in the UK is thought to have opened in Stoke Newington, north-east London, in 1966, and the industry has expanded to the extent that it employs an estimated 70,000 people, supplying and running 17,000 outlets.

Mr Zahawi, MP for Stratford-on-Avon, told the BBC: “People in the industry are really grateful and glad to have their hard work recognised. Most of the outlets, and the companies who make the meat, are small and medium-sized enterprises. They are truly entrepreneurial.
“It was standing room-only for the awards. We are going to have to go to a bigger venue next year.
“It’s nice for people who work so hard – often starting getting the fresh ingredients together early in the morning and not finishing until late at night – to see that they are appreciated by their elected representatives.” 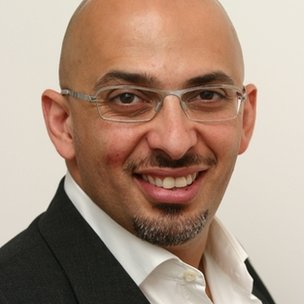 MP Nadhim Zahawi says kebab restaurants are becoming a more sophisticated destination
The eventual aim is to compete with the British Curry Awards, an event which has grown in stature since its foundation in 2005, and has been addressed by Prime Minister David Cameron. It attracts tens of thousands of nominations.
For the British Kebab Awards, MPs were asked to enter the best restaurants and takeaways in their constituencies, with their nominations entered in the competition.
After this, anonymous taste-testers went around the country to compile a short-list, with the winner being announced at the parliamentary gathering.
Tina Dikgoz, who runs Turkish Delight with her son Deniz, told the BBC: “I’m overwhelmed. The restaurant has been going for 27 years and it’s nice to have this award. It’s so lovely.
“It’s been hard at times. In the last few years so many restaurants have opened up around here, but we’ve done really well through word of mouth.”
Turkish Delight was nominated by Chorlton’s Liberal Democrat MP, John Leech, who said he was “made up”, adding that the kebab restaurant industry was “an important part of the UK economy but also of its social fabric”.

Mrs Dikgoz said: “We make our stuff on the premises, using fresh ingredients. Kebabs are really healthy and we can tell our customers exactly what’s in them if they have any concerns over allergies, for instance.
“Whether someone’s coming in for the first time or they are here every week, they will get the same treatment. We try to make it friendly, like sitting in the comfort of the home.”
Kebab manufacturers create around 2,000 tonnes of lamb doner meat a week and 700 tonnes of chicken.
The Oxford English Dictionary describes the dish as consisting of “pieces of meat, fish, or vegetables roasted or grilled on a skewer or spit”. It is usually served in pitta bread in the UK, accompanied by sauces and salad.
Often it has been thought of as a snack favoured by people turning out of pubs at closing time.
But Mr Zahawi, who ran the awards together with the Centre for Turkey Studies, said: “We forget that we said the same thing about curries at one time: that it was all about people going out to get them after several pints.
“However, the industry has developed, becoming more sophisticated and interesting – and bigger.
“In Parliament, people are talking about little other than the awards. Even when we are in division for a vote, they keep mentioning it. It’s really touched a nerve.”
It is hoped that the British Kebab Awards will become an annual event.
bbc newsbritish kebab awardscentre for turkey studiesibrahim dogus
101
Share FacebookTwitterReddItWhatsAppPinterestEmail