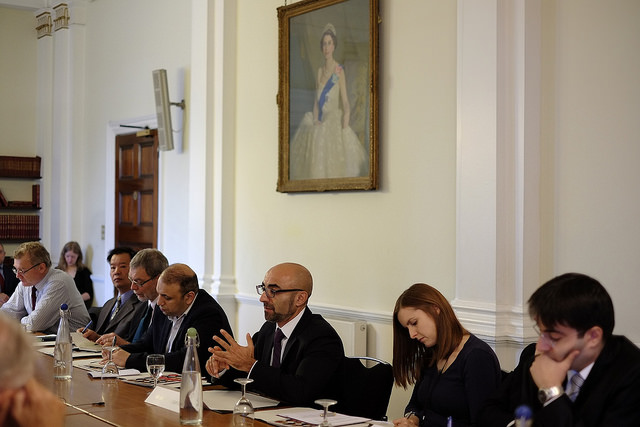 CEFTUS and RUSI Joint Forum: ‘Turkey and its Turbulent Neighbours’

This roundtable discussion organised by the Centre for Turkey Studies (CEFTUS) and Royal United Services Institute (RUSI) took place in the Reading Room of RUSI on 15 October 2014. Academics, politicians and bureaucrats attended the event where keynote speaker Dr Soner Cagaptay assessed Turkey’s relationship with its neighbours.

Dr Cagaptay highlighted that Turkey has two urgent issues, which are Syria and the Kurds. Failure of Turkey’s foreign policy over the Syrian conflict demonstrated that Turkey’s ambition to generate itself as a regional power has not worked over the region. He argued that this is due to the fact that Turkey lacks hard power of intelligence and hardware, and that former Foreign Minister Davutoglu would probably accept that Turkey’s foreign policy over the region has failed. He added that Turkey’s ultimate strategy in Syria and in the region is to oust Syrian President al-Assad and wants the international coalition to consider that in their fight against Islamic State (ISIS).

As for the Kurds, Dr Cagaptay argued that Turkey does not want to deal with the Kurdistan Workers’ Party (PKK) and affiliated Democratic Union Party (PYD) for three reasons. Firstly, Turkey still lists the PKK as a terrorist organisation despite having peace talks, secondly, the PKK did not support Turkey in their policy of ousting al-Assad and never targeted the Syrian regime. Lastly, Turkey wants to weaken the PKK’s hand on the negotiations table. Dr Cagaptay indicated that, Turkey wants to turn the PKK into a security client, like it did with the Kurdistan Regional Government (KRG). However, he said that the Kurds in Iraq wanted to remain friends with Turkey and they have oil unlike the Syrian Kurds.

Dr Cagaptay pointed out that after the PKK leader Ocalan was captured in 1999, the Syrian regime still allowed the Kurdish network to remain in Syria. He argued that Turkey has probably launched the peace process for fear of preventing a new surge of asleep Kurdish network of Syria attacking Turkey after 2011. He added that Turkey does not trust the PYD and does not want a PKK-PYD canton in Syria, but he also suggested that the government will realise that it is a mistake.

Referring to the relations with the US, Cagaptay stated that Erdogan’s relationship with Obama may never recover, however their alliance will remain as he asserted that Turkey will turn to its alliance with the West after the failed attempt to make Turkey the star of the Middle East.

Dr Cagaptay concluded his speech by indicating the two priorities of Turkey. One is the ever growing 2 million Syrian refugees in Turkey who most likely will not return to Syria, which is the reason why the Turkish government demands the buffer zones to be established in Syria to stop the flow of refugees coming in to Turkey. The other priority is the peace talks with the Kurds and establishing effective relations with the Kurdish actors in the region.