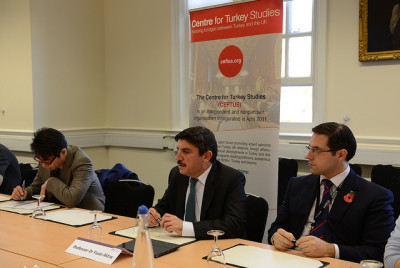 The Centre for Turkish Studies (CEFTUS) in partnership with the Royal United Services Institute (RUSI) has organised an exclusive roundtable with Prof Dr Yasin Aktay, Vice Chairman of Turkey’s ruling Justice and Development Party (AK Party) in charge of Foreign Affairs. The roundtable discussion was held under Chatham House rules followed by a question and answer session which was off-record.

Prof Aktay opened the discussion with a presentation on Turkey’s foreign policy and relations with its neighbours. Prof Aktay stated that AK Party’s foreign policy aimed at zero problems with all neighbours since they came to power in 2012 and that this policy worked for years until the Syrian Conflict erupted. He said that Turkey opened new embassies in the Middle East and in many countries in Africa and that accession talks with the European Union has gained speed.

Prof Aktay remarked that relations between Turkey and Syria were on good terms, however, similar to the Egyptian case, Syrian regime has not respected the choices of its people. Prof Aktay, referring to the Islamic State (ISIS) crisis in Iraq and Syria, asserted that Turkey actively engages in creating a solution to remove ISIS from the region.