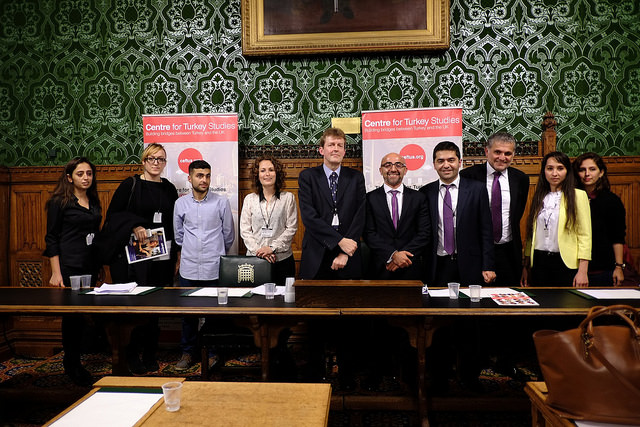 Independent analyst and consultant Mr Gareth Winrow chaired the debate. He described the Centre for Turkey Studies’ (CEFTUS) a new debate series titled the ‘New Turkey’. In this series, keynote speakers from all perspectives will explore the meaning of the ‘New Turkey’ concept and its relationship to developments in Turkey.

Dr Soner Cagaptay began his speech by reviewing Turkey’s economic transformation under Erdogan’s Justice and Development Party (AKP). He asserted that the AKP implemented structural economic reforms after taking power in 2002. These reforms spurred growth, turning Turkey into a majority middle-class society. This economic transformation has not been accompanied by an expansion of political liberties, however.  Cagaptay asserted that although Turkey is a highly polarised society, this is not a problem so long as the country remains democratic and free.

Dr Cagaptay said Turkey no longer practices the French brand of secularism, ‘laicite’, the strict separation of religion from the public sphere in Turkey for most of its modern history. He stated that the laicite principle of ‘freedom from religion’ has become ‘freedom of religion’. He asserted however that Turkey should seek a balance between these two interpretations of secularism.

Cagaptay said he is optimistic about Turkey’s growth prospects, provided it maintains political stability. He noted that this economic growth has given Turkey the confidence to play a larger role in regional politics. Calling it the ‘AKP Legacy’, Dr Cagaptay explained how AKP governments have shifted the country’s foreign policy. He warned however that regional upheaval also threatens to harm Turkey. The borders between Syria and Iraq no longer exist. Turkey’s southern border also risks disappearing. He indicated that Turkey is a soft power nation in the region and has no proxies through which to exert hard power. Its inability to project power has prevented it from becoming a great power in the Middle Eastern. Its failure at advocate its interests effectively has left it isolated in the region.

Mr Rusen Cakir focused his talk on Turkey’s domestic politics. He explained that three powers run Turkey: President Recep Tayyip Erdogan and the governing AKP; the imam Fethullah Gulen and his community of followers, known as ‘cemaat’; and Kurdish nationalist leader Abdullah Ocalan and associated Kurdish political movement. Cakir explained how Erdogan and Gulen allied to eliminate the political power of the military before becoming enemies. In contrast, Gulen and Ocalan have always been enemies. He added that the recent history of Turkey’s politics show how the fortunes of different actors are unpredictable.  Erdogan knows how to win elections. Gulen’s power is currently on the downswing, while Ocalan’s is on the upswing.

Cakir asserted that the Kurds’ control of Kobane, a town across the border from Turkey in Syria currently besieged by Islamist militants, is a very important to the Kurdish political movement. Erdogan and the AKP are against the Kurds’ control of Kobane. Yet he also noted that Gulen’s community has worked before with Kurds—noting its entry into Iraqi Kurdistan with schools and business in 1992.

Mr Cakir stated that although both Gulen and Erdogan’s political ideologies are Islamist, they do not guarantee a natural alliance. He said that Gulen’s cemaat considers that Muslims are responsible for the problems facing their countries. Muslims should work with the West to better themselves and challenge their own institutions. Cakir said that Erdogan’s milli gorus ideolgy maintains the West caused the Muslims’ problems. Only be unifying against the West can Muslims solve these problems.

Rusen Cakir outlined the incidents that led to the fallout of Gulen and Erdogan alliance, which began with a prosecutor’s attempt to arrest Head of the Turkish civilian intelligence agency MIT in 2012. Anti-corruption raids in December 2013, carried out by Gulen’s sympathisers against the AKP government, was the second major incident causing a falling out between the two groups. He explained that both sides have directly attacked each other. Erdogan has survived corruption allegations made against his government and sustained his authority and power. Cakir said that Erdogan has already eliminated Gulen’s followers from the security forces. The next step will be removing Gulen’s followers from judicial institutions. However, Gulenists are able to maintain their strength, especially abroad. He said that the accusations made by both sides against the other are true, but their defences against these accusations are false.

Mr Cakir asserted that the peace process has not failed. He explained that both the government and Ocalan would like to sustain achievements of the process. However, he said, the recent incidents of rioting in southeast Turkey demonstrated that it is no longer enough to recognise the presence of Kurds. Instead, the reality of Kurdistan – Kurds’ right to autonomy – must also be recognised.

Please click here for more videos from the event.

CEFTUS Westminster Debate ‘Turkey, the Kurds and the crisis in the Middle East’