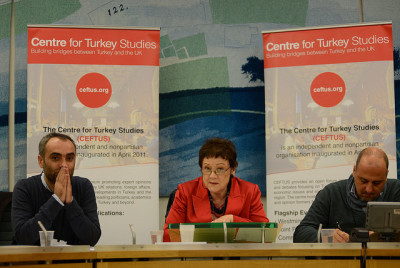 Hosted by John Woodcock Labour and Co-operative MP for Barrow and Furness, the debate was kindly chaired by Baroness Sarah Ludford MEP.

Mr Ismail Saymaz elected to speak first, relating a series of anecdotes of individuals detained in Turkey who had been charged with terrorism for non-violent behaviour, including an imam in the eastern province of Batman who was imprisoned for eight months for “praying with intent to secede” after the imam had  presided over funerals for members of the Kurdistan Workers Party (PKK). Relating several like cases in which actions such as speaking Kurdish, participating in a Newroz (Nowruz), the Persian New Year holiday that in Turkey is closely associated with the Kurdish population and was previously banned, and membership in certain football clubs perceived as being politically left wing, Mr Saymaz argued, were labelled as terrorism by the state in an effort to curb dissent against both the state and the ruling party.

Mr Saymaz reminded the audience that the number of political prisoners in Turkey was approximately 80,000 in 2013, nearly double the number that there were in 2005. In the context of these arrests, Mr Saymaz continued, Ahmet Şık was arrested for his unfinished book İman’in Ordusu (The Imam’s Army), which explored allegations that members of the Hizmet movement associated with Fethullah Gulen had established a secret network inside the judiciary and police forces. According to Saymaz, Şık himself was charged with criticising Gulen and alleging corruption inside the ruling Justice and Development Party (AKP), at the time thought to be closely aligned with the Gulen movement.

Mr Saymaz characterised the Gulen movement and the AKP together as oligarchs, who from 2007 until 2013 ruled the country and suppressed all dissenting political speech, using terrorism charges to detain and silence all opposition. Mr Saymaz continued by detailing the AKP- Gulen split and the associated “purges” of the judiciary and the police force, and the damage done to both press freedom and personal freedom in Turkey as the erstwhile allies attempt to neutralise the power and influence of each other’s supporters in the press and government. Mr Saymaz concluded by predicting that the abuse of terrorism charges would certainly continue in the near future, and predicted a new round of trials similar to the controversial Ergenekon trials which have taken place in Turkey since 2007.

Mr Ahmet Şık compared the abuse of terrorism charges against political opponents of the AKP- Gulen axis to the persecution of Kurdish citizens and activists during the 1990s, emphasising that such behaviour as Mr Saymaz described is neither new to Turkey nor unique to the AKP regime. The AKP’s “New Turkey”, Mr. Şık said, bears a striking resemblance to the “old Turkey”, especially in terms of police tactics and civil liberties.

Mr. Şık characterised the press-state relationship as Turkey as unfree and subservient, in that the mainstream press protects the government and actively practises self-censorship. Individuals or organisations who violate this dynamic risk arrest and prison, and only 2.5% of journalists in Turkey belong to a union. Mr. Şık blamed the structure of the media in Turkey for this situation, asserting that 60% of news outlets are state owned and the remaining 40% are fearful of being punished through tax suits, such as the $3.2bn tax fine levied against the Dogan Media Group in 2009, a move widely seen as government punishment for critical government coverage in media outlets owned by the Dogan Group. As a result, there are very few media outlets who can resist state influence, and those that exist are quite marginal, according to Şık.

The government actions described by both Şık and Saymaz, he continued, were achieved by an alliance of the AKP and the Gulen movement, which, from the early 2000s until 2013, worked together quite effectively to suppress dissent and keep the general public in the dark about the methods used to do so. Mr. Şık opined that once the AKP- Gulen alliance had effectively silenced all its enemies, the two sides began to turn on each other in a bid for control of state authority, particularly control of the judiciary and security forces, and attributed the AKP- Gulen split to political differences dating back decades.

Mr. Şık concluded that the conflict is far from over, asserting that the Gulen movement still maintains significant control over the security apparatus, while the AKP controls the legislature, and that the continued manoeuvring by the two groups against each other will cause serious damage inside the Turkish political landscape.