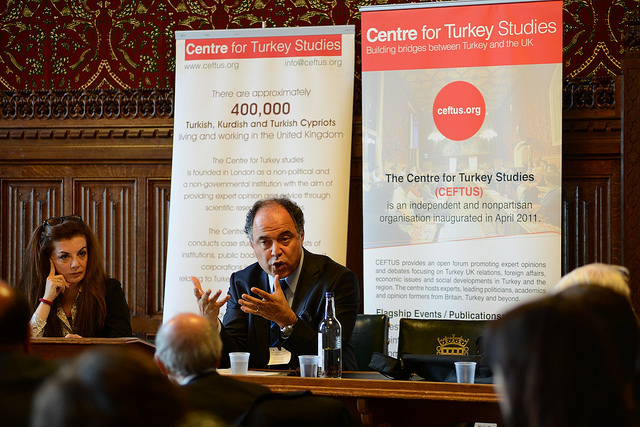 The Centre for Turkey Studies (CEFTUS) is delighted to invite you to a Westminster Debate with Professor Fuat Keyman of Sabanci University and Dr Natalie Martin of De Montfort University.

Politically turbulent for over a year due to public protests and unrest on governmental level, Turkey is going through a very difficult period now due to miners’ disaster in Soma. Nearly 300 miners lost their lives in an explosion of which the causes remain unknown. The mining company, the Ministry of Energy and Natural Sources and the Development and Justice Party (AKP) government are under huge pressure to respond to the deadliest mining disaster in the history of the Republic of Turkey.

Turkey is now also preparing for presidential election in August 2014. The government’s responses to the public protests and alleged corruption allegations against some members of the government received criticism from the opposition in Turkey and international bodies. Turkey’s democratisation process is alleged to have been damaged in the last year as concerns over freedom of expression and rule of law remain serious.

Professor Fuat Keyman recently co-authored a book with Dr Sebnem Gumuscu on Democracy, Identity and Foreign Policy in Turkey: Hegemony through Transformation (Islam and Nationalism). In this debate, Keyman will discuss Turkey’s political and cultural transformation under the AKP over a decade and he will address current political developments in the wake of presidential elections. Dr Natalie Martin will analyse Turkey’s foreign policy and the EU’s perspective regarding the current developments in Turkey.

Dr Alev Adil of the University of Greenwich will chair  this debate.

The event will take place on Wednesday 4 June 2014, between 7PM and 8.30PM in Committee Room 12, House of Commons. Please note that security checks are required to enter the House of Commons, so we kindly ask you to arrive at 6.30PM, allowing the event to start and end promptly on time.

Dr Natalie Martin is a former BBC journalist turned academic specialising in EU Turkey relations. She is a part time lecturer at De Montfort University and a Visiting Fellow in the Centre for the Study of International Governance at Loughborough University. Her forthcoming book “Security and Turkey-EU accession: Norms, reforms and the Cyprus issue” will be published by Palgrave Macmillan in spring 2015.