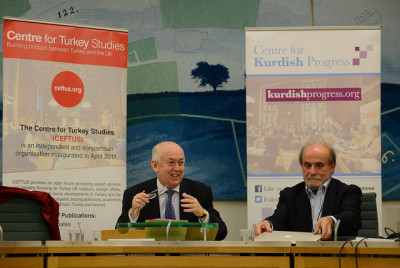 Mr Ertugrul Kurkcu began his talk, which focused on recent developments and challenges in the Kurdish peace process, by presenting an outline of the actors involved in the negotiations. According to Mr Kurkcu’s characterisation of the events, there are three distinct elements representing the Kurdish side of the negotiations: Abdullah Ocalan, the imprisoned founder of the militant Kurdistan Worker’s Party (PKK); the Group of Communities in Kurdistan (KCK), a collection of political and armed groups supporting increased Kurdish autonomy; and Mr Kurkcu’s own Peoples’ Democratic Party (HDP), currently the main Kurdish interest party active in Turkish politics.

Mr Kurkcu reported that the negotiations between the Kurdish side, consisting of the groups mentioned previously, and the Turkish government had resumed on Monday 17 November after a month long hiatus. The Kurdish groups had suspended the talks on 6 October and called for demonstrations against the Turkish government, in protest of the government’s inaction during the Siege of Kobane in Syria, in which Kurdish militants battled fighters from the Islamic State of Iraq and Syria (ISIS or IS). Those demonstrations, occurring across Turkey but primarily in Turkey’s Kurdish south-east and especially in the largely Kurdish city of Diyarbakir, left dozens of people dead and were the deadliest street protests in Turkey in many years.

Mr Kurkcu referring to Turkish President Recep Tayyip Erdogan and Prime Minister Ahmet Davutoglu’s remarks on relationship between the Kurdish peace process and the crisis in Kobane argued that the Kurds in Turkey cannot negotiate for peace whilst their fellows fight brutality of ISIS on the other side of the border.

Mr Kurkcu stressed the need for Kurds to be able to defend themselves and the threat posed to Kurdish interests by ISIS. He emphasised Kobane’s role as an independent, multi-ethnic, multi-cultural, secular model for other Kurds. He went on to detail the plan proposed by Ocalan, which calls for a confederation of autonomous Kurdish regions (such as the extant Kurdistan Regional Government in Northern Iraq) in Syria, Iraq, Turkey, and Iran.

Mr Kurkcu expressed his confidence that the HDP would break the 10% limit in June’s parliamentary elections. In Turkey, a political party has to achieve at least 10% of the vote in order to gain any seats in the assembly, a law widely seen as having been crafted to keep Kurdish representatives out. Mr Kurkçu also stated that he believes support for Ocalan’s plan will increase in the near future.