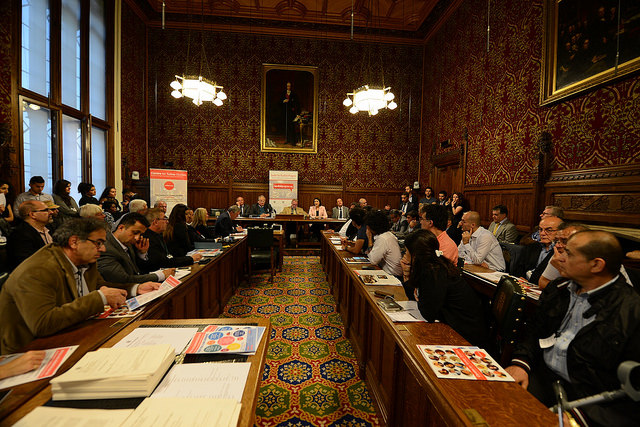 Joint Forum ‘the Crisis in Iraq’

The London based Centre for Kurdish Progress in partnership with the Centre for Turkey Studies (CEFTUS) organised a debate on the crisis in Iraq. Meg Hillier MP for Hackney South and Shoreditch hosted the event at the House of Commons, Committee Room 12. Over 100 hundred people attended the event, including leading members of British and Kurdish civil society.

Meg Hillier MP opened the debate, stated that standing by and simply watching what has been happening in Iraq is unacceptable and urged the West to act against the crisis and deliver tangible support to the Kurds.

Bayan Sami Abdul Rahman asserted that what is happening in Iraq is a genocide. She urged solving the humanitarian crisis as quickly as possible. Rahman said “Iraq has a bloody history and I am wondering how many genocides and how much more violence the Iraqi Kurds have to suffer before this changes?” Answering a question from the audience regarding a possible solution to the crisis, she said that the only solution is to transform Iraq into a federation of three states – otherwise Iraq has no future. Responding to another question regarding what Turkey’s government can do to improve the situation, Rahman said that Ankara should seal its borders to stop more terrorists joining the Islamist fundamentalist Islamic State (IS, or ISIS) and provide more humanitarian aid.

Dr Liam Fox MP focused on the West’s response to the threat of jihadism and ISIS. “ISIS hates us not because what we do but because of who we are”, he said. Dr Fox highlighted that IS is a strong organisation with millions of dollars coming from the Gulf states and from selling oil on the the black market market. He called for Britain to cut off IS’s income stream and stop the countries and individuals from supported them. He added “we need to act quickly because it is a threat not only for Iraq, but for all the countries in the region and for the West. If we are not be able to stop them, then IS will export their hate and intolerance to other countries and a bloody war of religion will start”.

Labour Life Peer Lord Maurice Glasman was of a similar opinion, emphasising that “action” is the key word. Jason McCartney MP said that the battle for Kurdistan starts now and he hoped that UK can support and help the Kurds in an effective way.

“ISIS is not only our enemy, as we have been warning all international organisations since 2012” said Dr Alan Semo of the PYD. He said that the PYD has been protecting civilians and land, with limited resources and weapons, against one of the strongest Islamist groups in the region. He added that if people had heeded the PYD’s warnings, then IS could have been stopped before it acquired its current power. But instead the PYD’s warnings were ignored and the region is now paying the price. Dr Semo indicated that they are willing to cooperate with all countries that want to help us fight ISIS and that a joint Kurdish military group formed by YPG, the Kurdistan Worker’s Party (PKK) and the Iraqi Peshmerga, with political and financial support and weapons from the West, could defeat ISIS.

Liberal Democrat Peer and member of Communications Committee, Lord Tim Clement Jones, said that focusing only on Baghdad would be a mistake as Iraq includes several actors with different needs. Kurds are one of them and the fact that they have been able to build a democratic state in the middle of an area beset by war and violence makes them a key player in solving the current crisis.

Bill Park, Senior Lecturer in the Department of Defence Studies, King’s College, London University, asserted that the West should rethink relationships with thePKK, the PYD and even Syria’s Assad, and that a better understanding of the region and ISIS is necessary for finding an enduring.

Columnist for the Independent Patrick Cockburn referred to Turkey’s role in this crisis and argued for Turkey to close its borders to ISIS. While it has been clear for a long time that the civil war in Syria has destabilised Iraq little has been done to counter this trend .

Journalist and author Harvey Morris was pessimistic about the future of Iraq and strongly opposed cooperation with Syrian regime. Morris also argued that the new government in Baghdad will fail to respect the rights of Kurds.As a result, he said, it is time to deal with KRG directly. It is not only the Kurds but also Turkmens who suffer from ISIS’s brutality, the Iraqi Turkmen Front Representative in the UK Sundus Saqi warned. She added that IS is a problem for all minority groups in Iraq, regardless of their faith or ethnicity.

The speeches followed with a lively question and answer session. The Centre for Kurdish Progress thanked attendees and promised further debates on developments in the Kurdistan region.