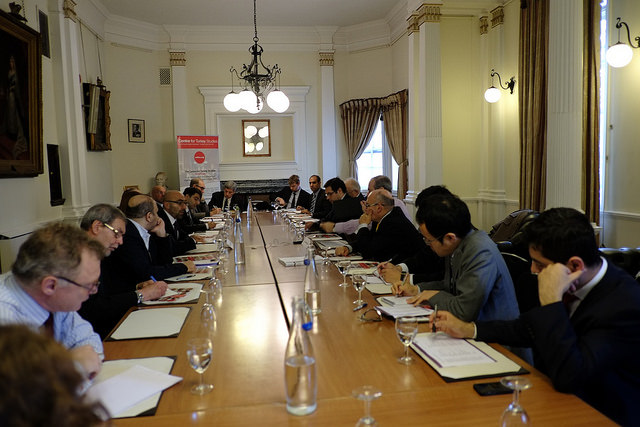 This Joint Forum is organised by the Centre for Turkey Studies (CEFTUS) and Royal United Services Institute (RUSI).

With the Turkish military poised on the border of Kobane in neighbouring Syria, this timely roundtable led by Dr. Soner Cagaptay will examine Turkey’s impact on its neighbours and across the Middle East.

Ankara is in a dilemma. While the Turkish parliament has given the go ahead for Turkey to engage in military action against ISIS targets, President Recep Tayyip Erdoðan has so far refused to commit forces as Turkey is concerned that a consequence of this will be to help Syrian president, Bashar al-Assad, stay in power.

However, even if the current standoff over Turkey’s eventual contribution to the campaign against ISIS is resolved, bigger questions lurk on the horizon: Turkey’s position on the Kurds in the region, broader stability questions in the Middle East and Turkey’s negotiations with the European Union.

Speaker Biography
Soner Cagaptay is the Beyer Family fellow and director of the Turkish research programme at The Washington Institute for Near East Policy. He has written extensively on US-Turkish relations, Turkish domestic politics, and Turkish nationalism, publishing in scholarly journals and major international print media. A historian by training, Dr. Cagaptay wrote his doctoral dissertation at Yale University (2003) on Turkish nationalism. Attendance at this event is open to members of the Institute and the Centre for Turkey Studies, as well as guests of the two institutions, but registration is required.

Attendance
Attendance at this event is open to members of the Institute and the Centre for Turkey Studies, as well as guests of the two institutions, but registration is required.

This event is open to all RUSI members and CEFTUS members.

To register RSVP to [email protected]