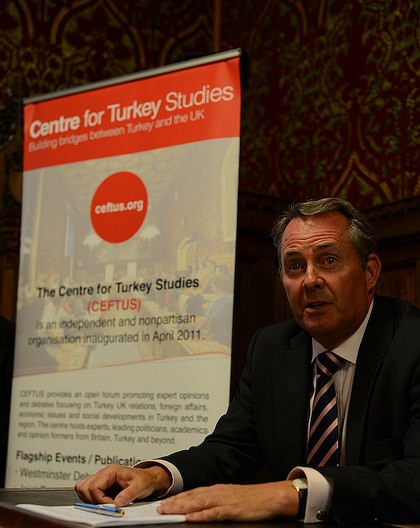 Former Secretary of State for Defence Dr Liam Fox Conservative MP for North Somerset speech in the Joint Forum ‘the Crisis in Iraq: Unexpected Alliances, Western Intervention and the Question of Kurdistan’.

“In the west, the understanding of the mindset of Jihadists is limited. There is a Western liberal democratic thought: a belief that if only you can get everyone round a table for long enough, over a big enough cup of coffee, eventually they all begin to see reason. It is not like that. There are people in this world who are irreconcilable to the values of the international community.

There are people who hate us, not because of what we do, but because of who we are and what we stand for and we need to be very frank about that. Those who are reconcilable to our ways of thinking, our ways of life, our concepts of rule of law, of democratic governments, of human rights then indeed we should make every effort to reach out to them to try to help them develop the institutions that will be required. But there will always be those who are irreconcilable, who need to be dealt with by force, sometimes lethal force.

We need to be under no illusions. ISIS are our enemies. They actually pose a range of risks. We have heard graphically and we have seen just what threats are posed to those poor, unfortunate civilians who happen to find themselves in territory controlled by ISIS and what we have witnessed are crimes of the utmost barbarity.

They also, with their political aims, are close if they succeed to bringing the whole region into what would effectively be a very bloody religious war.  And we can only imagine what the consequences would be well beyond the region of such a conflict. And they pose a risk to those of us in free countries because they would be the ‘University of Jihad’ if they were given half an opportunity. And you can bet your bottom dollar that the hate and the intolerance that they show to those around them would be exported to countries like our own where they would successful. That is why I had been arguing in recent weeks that we need to have military intervention to deal with the threat of ISIS.

We need of course to have the ability where we can to cut off their funding. We need to be able to reduce their ability to sell oil on to the black market. It is very difficult to stop it, but it is one of the main means by which they are being funded.We need to stop the flows of finance to them through the international banking system. They are a very well organised, well run organisation that means there are paper trails about where their money has come from. We need to stop groups and governments in the region from playing a double game and supporting them. And we need, if necessary, to provide military assistance to those who are taking them on, our allies on the ground and if necessary directly ourselves.

What we know that our allies in the region lack is air power and that comes in two ways. They do not have the ability to hit strategic targets and we need to disrupt their command centers and communication centers. That can be done by Western air power, but ultimately our allies on the ground, if they are to have a successful counter offensive, will require close air support. And there is no point in saying that this is the greatest threat that we face in a generation unless we are willing to follow through and recognise that our deeds need to match our rhetoric.

If we do believe as I do that they are the threat to the civilian population, to regional stability and potentially our own security here, then we must act. When you reach the conclusion that they are a threat to human life immediately and to democratic systems like our own in a longer term, then there is a duty that comes with that to follow through and do whatever is necessary. And public opinion may not necessarily be with us. But the point of leadership is to do what we believe to be right and then explain it to the public and tell them why we have had to do what we believed was necessary. If, all the time, we simply wait for public opinion to tell us it is alright to do something we might as well be governed by the opinion pollsters.

That is why we need to act decisively, quickly and, if necessarily, ruthlessly against what is the enemy not just of those in the region but of all those who believe in civilised values and are willing to do what is required to make sure that they are universally applied.”