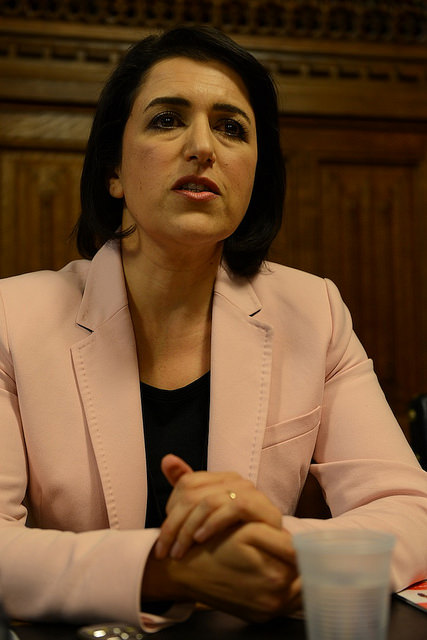 “Isis is a threat to all of us whether we are in the UK, in America, in France, Germany or whether we are in Kurdistan or elsewhere in Iraq or Syria . Right now in Kurdistan region we face three issues. First is a humanitarian crisis. This year since January, the Kurdistan region has received 850000 displaced people from Iraq. About 500000 of them arrived in August. Imagine, half a million refugees arriving on your door step in one month, so 850000 have arrived this year when you add that to the number of displaced Iraqis and Syrian refugees that arrived before 2014, Kurdistan region now has 1.4 millions IDPs and refugees. Our own population is about 5 million so this is the equivalent of Scotland which has 5 million people, receiving 1.4 million refugees.

Scotland is an advanced economy , it is part of the United Kingdom. Still. Despite the discussions over budgets between Edinburgh and London. Never the less, London pays Scotland its budget, Baghdad does not pay ours.

So imagine Scotland receiving 1.4 million refugees while it is at war against the most weaponised and richest terrorist organisation in the world. So, the humanitarian crisis is on an unimaginable scale . It is true that the United Nations and many aid agencies are in Kurdistan and they are working with the Kurdistan regional government. However, the crisis continues: many of our schools, the school buildings are housing refugees. This means that the school term has had to be pushed back for local children by at least 2 months. Water electricity supplies and some parts of the Kurdistan region cannot cope with the increase in the number of the population. There are people sleeping in churches, in peoples gardens and even in the street, in half-finished buildings. The humanitarian crisis is still there and every single one of you, I ask all of you in this room to do something, whatever it is that you can do in your own capacity. Please do something to help those refugees. They need you, they need all of us.

Many of those refugees are Yezidis from the Shingal or Sinjar area, many of them are Christians, there are Shebeks, Karkeys, Turkmen and others. They have fled genocide and I use that word genocide very carefully and deliberately. ISIS have clearly picked out Yezidis and other minorities very deliberately, they have targeted them deliberately because of their faith or their ethnicity and they have engaged in ethnic cleansing. The Kurdish Genocide Task Force Group based in London of experts, has issued a statement calling for a UN investigation of these crimes for those who are responsible to be prosecuted and punished. And I am pleased that the United Nations human rights council has said that it will investigate the crimes committed by ISIS. I think this is a really important point. If what ISIS is doing goes unpunished aside from the military response, if what they are doing goes unpunished it will mean that we as human beings accept genocide. We should never accept genocide no matter who the victim.

On the military front, after June the 9th when Mosul fell to the Islamic terrorists, we in the Kurdistan region found ourselves with a 1000 km border with ISIS. That border had previously been protected by 6 Iraqi army divisions and up to the US withdrawal from Iraq, an American Army Division as well, suddenly, we, our peshmerga alone, had to defend this very long border. Our Peshmerga are lightly armed and they cannot match the weapons that ISIS have, ISIS have managed to capture weapons from the Iraqi army that were supplied by the United States. This is why we have been calling for weapons to be sent to the peshmerga and I am pleased that today or yesterday the British Defence Secretary has announced that the UK will start to deliver weapons. They are not the heavy weapons that we have been asking for but it is a start and we hope it is the start of a much bigger involvement by the UK but really, what we are looking for is an international coalition that will step up and step up to the plate and take up its responsibility in helping the Peshmerga fight back against ISIS.

The US air strikes have been effective in supporting the Peshmerga. We have had successes in pushing back the ISIS terrorists and just in the past few days, we have taken back Mount Zartak and we have taken back areas in Zumar and just today I heard that a mass grave containing at least 14 Yezidi bodies was found in that area.

So on the military front we are having some successes, but we need weapons, we need training and we need the air strikes to continue if we are going to defeat ISIS, not just push them back slightly. We have had a political crisis in Iraq for some time pre-dating ISIS, taking over Mosul, but really the take over of Mosul heightened the political crisis. But we have recently made progress Fuad Masum who is Kurdish was elected as president. Now we have the prime minister designate in place and a new cabinet more or less announced. I say more or less because there are two key ministries that remain vacant, the ministry of defence and the ministry of interior. I hope these two ministries will be filled very soon because under Prime Minister Maliki they were vacant and he kept the ministries for himself. Never the less, we have progress in Baghdad, the Kurdish demands have not been met so the Kurdish block has given the Iraqi government three months to deal with the issues that remain outstanding. The budget that has been denied to the Kurdistan region, the status of the Peshmerga, oil sales and the Kurdish areas outside of the Kurdistan region.

I would like to conclude by thanking the organisers of this meeting for inviting me to speak. I am open to taking questions on any and other subjects that I have not touched on and I would like to thank all of you for being here but I hope that by being here you will do something to help those refugees. They need you, do not believe the pictures of aid arriving. Aid is arriving but it is not enough, those people will be living in winter within 8 weeks. We need to provide them with proper shelter, warm clothing and other facilities. Thank you very much.”