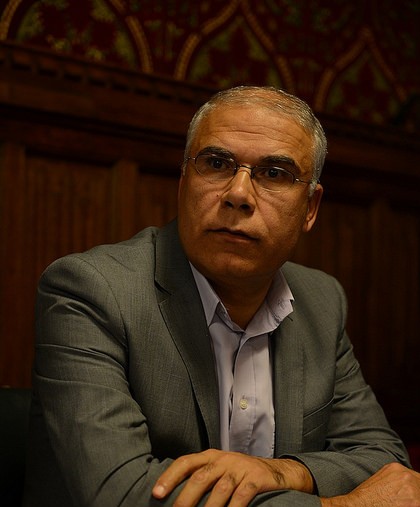 UK Representative of the Democratic Union Party (PYD) Dr Alan Semo’s speech in the Joint Forum ‘the Crisis in Iraq: Unexpected Alliances, Western Intervention and the Question of Kurdistan’.

“In Rojava, Kurdish forces (YPG) have been fighting these terrorist organisations from Jihad and Nasrat to ISIS to lately to IS. And they have been successfully protecting their area, managing their people, organising their people and very sufficiently have been defeating ISIS now from Rojava. And for two years, as I mentioned, on their own limited resources, limited weapon, limited accessories from own people, they have been managing successfully to fight or defeat this terrorist organisation and we have been doing this on behalf of all of you, the West.
Now, I am very delighted to hear that they are saying that ISIS is our enemy now. We have been warning them and calling for this for two years: this will happen and this is not just to Rojava, but this threat will be all to the global. I am very delighted that we are agreeing and realising that point. We would like to, as Kurdish forces in Rojava, support and encourage the air strike now. That is going on in Kurdistan region, in Iraq and in Syria and I know it is complicated, but we want to carry on protecting Rojava with air strike as well.
We have been asking for this assessment and we are willing to co-operate with whoever is the regional or international power that wants to defeat and eliminate this terror from all the region, not from only Rojava, or from KRG or from Iraq or Syria, from all region.If we do not act on this now I do agree with previous speakers, if we do not act now together and united, it will spread to Lebanon, to Jordan, to Saudi Arabia to wherever and if not prevented, they will come to London as well.
So this is a very serious matter. All of us have to take responsibility for it and this is why we would like that air strike should be continuous. But our observation is that they might not continue as it happened in 1991 for the great uprising in Southern Kurdistan when they pushed Saddam. They let dictator Saddam from Kuwait to Baghdad sit there for another 12 years and then came back after 12 years and took him out. We hope that that will not be the case in this ISIS crisis and we hope that the Western led by US, UK, I hope French, Italian and other NATO and EU countries will join this strike and support the people, the Kurdish people which are now underground. The Kurdish forces, they call it now, have established a joint military Kurdish forces and this military joint Kurdish forces are capable, efficient and they can defeat ISIS if they get right support from the West.
By supporting this joint military group which is formed of Peshmerga, YPG (the Syrian Kurdish forces), and the PKK… And all these local units, that they call the Shangal Resistance unit and all of them they have established a military commander, joint military commando, they are underground and they very effective. This is why the best way to be sending weapon and sending support to people who are underground, not just sending support to kind of parties or one part of parliament or any political state party there.
These are the people who have been protecting and this is why Rojava forces went to Shangal because we have two points of strategic national strategic point of view: the first one is that we want it to go in to the risk of protecting these civilian people in Shangal and make it a safe corridor. We have got now about 15000 people living in our refugee camp. They call it Newroz and I call it Kurdistan Rojava camp. They are welcome, they have been taken to that camp and they live in the camp, in Newroz camp despite all the siege of Rojava. The Rojava people sacrifice all they can to help these people. There are urgent medical treatment, there are urgent medical humanitarian aid and unfortunately, we have been doing all this without getting any international aid.

I think that due to the crisis happening in the region now there will be a point that the Kurdishness and the Kurdish unity will be woken up and that Kurds will get united to defeat not just ISIS but all the threat to the Kurdistan nationally.”