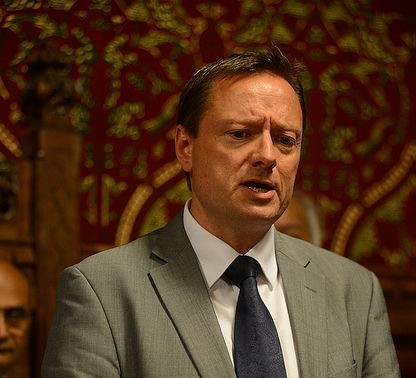 Mr Jason McCartney Conservative MP for Colne Valley speech in the Joint Forum ‘the Crisis in Iraq: Unexpected Alliances, Western Intervention and the Question of Kurdistan’.

“Thank you very much indeed Gary and Bayan, and thank you to the Center for Turkey Studies and the Center for Kurdish Progress. I have never seen this committee room as full as it is now which shows there is so much passion, care and concern for this issue. So thank you for all turning up here this evening.

As Gary said, my first experiences with Kurdistan and Northern Iraq came in 1995 when I was in the Royal Air force and I was sent on detachment to operation warden which was the no fly-zone over Northern Iraq. if you remember after the end of the first Golf War, Saddam Hussein continued his persecution of the Kurds, there was the genocide and very much similar to as we seeing now men women and children fled to the mountain. In response to that the United Kingdom under the leadership of Sir John Major and other senior politicians responded very quickly indeed with a no fly-zone along with Turkey, France and the United States and we also supplied aid to those that needed it. That was an incredibly effective no fly-zone were operating from Incirlik Air Base in Turkey near Adana.

As well as securing the air to let the Kurdish people know on the ground that any air craft were friendly ones, we were also operating on the ground and I operated out of a little town called Zako, where we had a military coordination centre. We visited all the villages locally to let them know that the air forces above were friendly and we also made sure that they had the food and medicines. I also particularly remember we delivered electricity generators so that they had power in their villages. I then returned to Erbil last year with Gary and the old Party Parliamentary Group and I saw a part of Northern Iraq that has flourished: we were talking about commerce, we were talking about tourism, we were talking about education and in my local university Huddersfield University, I met dozens of students who were studying in my local university and are going back to Kurdistan to work as doctors, teachers, lawyers and engineers. That just brings home the relevance of why we should be concerned about Kurdistan.

In 20 years, the Kurdistan regional government have developed this peaceful and prosperous part of Northern Iraq and this is the big challenge that we have got, because as Liam said, public opinion is led in this country by what they see on the news. And when I talk about Northern Iraq they think about the chaos, the sectarian divide and the car bombs in Baghdad. They do no realize there is this wonderfully peaceful up until recently and prosperous part under the Kurdistan regional government which we need to support as much as we can. it is very very important.

And in parliament, last Monday when we came back from the summer recess the Prime Minister David Cameron gave a statement on all the security situations around the world and there is a lot of them at the moment of course with Ukraine, Russia, Syria, Gaza as well. I asked him that we should commit to air-strikes and air support now in Northern Iraq just as we did 20 years ago and I cannot stress that enough.

So thank you very much indeed for all of your support. I am actually going off now downstairs for a dinner with some Royal Air force veterans who served in the battle of Britain in 1940. They are very very old and I have just been thinking on that because a few very brave air men supported on the ground by men and women saved Britain from tyranny in 1940 . That’s what we have got to do now. The battle for Kurdistan’s future is happening now and I hope the United Kingdom government will move very fast indeed by committing military support and also our air forces so that we can protect the Kurdish people.”

‘The Crisis in Iraq’: Meg Hillier MP for Hackney South and Shoreditch