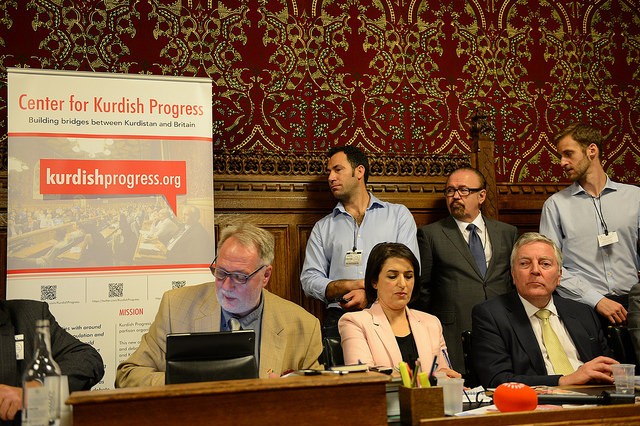 Lord Tim Clement-Jones’ speech in the Joint Forum ‘the Crisis in Iraq: Unexpected Alliances, Western Intervention and the Question of Kurdistan’.

“You have heard a great deal of a cross-party consensus this evening and I do not intend to differ from that consensus at all.

I have been a regular visitor to Kurdistan over the past ten years and I have developed a huge admiration for the way that, against all the odds, genocide, persecution and hardship, the Kurds have built a democratic plural, an increasingly prosperous society in the midst of some pretty dysfunctional neighbours, quite frankly. We in this country and more broadly amongst the western allies need to recognise the vital importance to us of the Kurds as allies, because I believe that they are bastion of civilisation, democracy and pro-western sentiment in the Middle East. And they have so many good characteristics: They are self-critical about themselves in so many ways: what other Middle East governments would have commissioned the economist intelligence unit to do a study about the region, about its strengths and weaknesses in all its forms and then follow up by adopting its recommendations. It was published before June, but even then the contrast with conditions in the rest of Iraq could not have been starker. The report highlighted some key strengths, but the key weakness identified by the economist intelligence unit was the relationship with the Baghdad government.

Now that was before the change of government, but as we have heard from Bayan, there are some real issues about the formation of that government and I personally am not overly optimistic about the abilities of the parties to come to an agreement and it may all be in 3 months time that there is no agreement on oil and gas issues, the disputed territories, resources for the Peshmerga and so on. Let alone the backlog of central government budget contribution towards the KRG, especially Mr Shahristani remains a force in the Iraqi government.

All this means that as the UK or the EU, we cannot keep trying to deal exclusively through the Baghdad government, of course any leverage brought to bear on the Baghdad government is extremely welcome. But Morris made exactly this point, the KRG should be treated as an autonomous government at the very least and their aspirations to be independent regarded as legitimate. From here on out, we need to deal direct and do whatever it takes to support them. Historically, this has not been the case; whether we are dealing with consular services, visas, business support despite the fact that Kurdistan has been by far the most promising region economically, security wise and almost on every other count, but there has been a reluctance to recognise this. This is sort of so-called even handed treatment. My view is that we should have had much closer relations with the KRG some time ago, going beyond just simply trade relations. The need for direct relations at a senior level is doubly important today and as you have heard and I am not going to repeat we have an enormously serious situation.

The one point I would make where I absolutely agree with Bayan is that we need to be clear that what is happening is genocide and the recent Amnesty report sadly did not use the word genocide. It talked about ethnic cleansing on a historic scale, but that is what it was, it is genocide.  And I support the Kurdish Genocide Task Force calling for those acts to be investigated and referred to the International Criminal Court. And the implications of what is happening there, as we have heard again, are so far no borders are recognised by ISIS.

Bayan has talked about the bordering a thousand miles an extent, the need for both aid and arms is huge. 1.4 million refugees on top of the existing population is completely insupportable without huge amounts of humanitarian aid. I could go on: there are many many other aspects.

I was very heartened by the Prime Minister and the Secretary of State of Defence agreeing to supply British arms directly to Kurdistan. I think that is absolutely vital and we now seem to have a consensus that that is the way to go that we will give the Peshmerga whatever they need, but we need to see that translated into action. And I think it is absolutely vital that we play our part in air strikes as well.

Through all these, we must treat the Kurdish people and the KRG as essential allies in implementing a strategy to defeat or at least minimise the threat from ISIS and that means treating them as equals from here on out as should other members of the EU, and the regional powers whether they are Turkey, Iran or Saudi Arabia.”