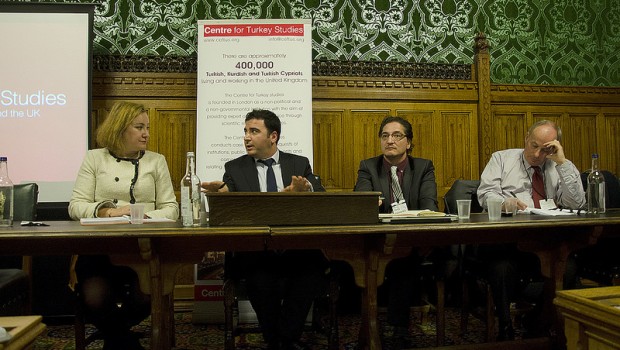 This CEFTUS debate was kindly hosted by Stuart Andrew Conservative MP for Pudsey.

The Centre for Turkey Studies held another timely debate on democracy and politics in Turkey with experts analysing the political events of 2013 as well as the corruption probe at the end of the year of 2013.

Dalaman presented a political chronology of four political parties in the Turkish parliament.

She ended her presentation noting that democracy within AK Party does not exist and that lack of democracy within the party reflects on AKP politics throughout Turkey. Dalaman in Q&A responding to a question about the Gulen Movement argued that the movement is a civil society movement that Turkey needs and people of Turkey would not have found out about the alleged corruption scandal if it was not for them.

Bill Park lastly stated that he used to be optimistic about democracy in Turkey and AK Party when he first started writing on Turkey. However, he added, he now feels very pessimistic as it is much worse than the early 2000s.