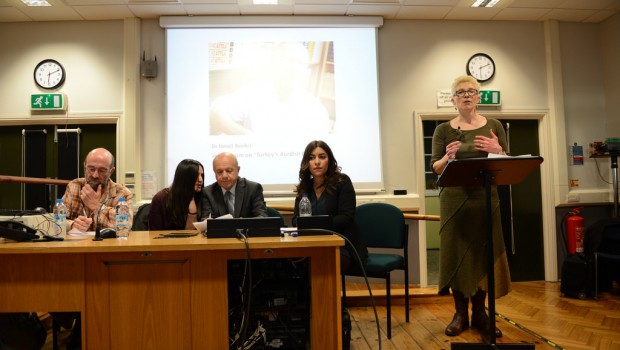 Dr Besikci has written extensively on Turkey’s Kurds and their rights. He is regarded as an icon for freedom of speech as he was imprisoned for 17 years on propaganda charges stemming from his studies on the Kurdish population in Turkey. For many years, he was the only prominent non-Kurdish academic who spoke against the oppression on Kurds. He studied at the Faculty of Political Sciences of Ankara University. In 1964, he became an assistant at the sociology chair of Erzurum Atatürk University. He completed his Ph.D. on the social structures of the nomadic Alikan tribe. He has been described as “modern Turkey’s pioneer of Kurdish studies”. He was a candidate for the Nobel Peace Prize in 1987. He is a PEN Honorary Member. Ismail Besikci Foundation of which Ismail Besikci is honorary chairman was established in 2012.

This CEFTUS debate was kindly chaired and hosted by Jeremy Corbyn Labour MP for Islington North. Known for his long standing campaigns for human rights, Corbyn is a prominent Amnesty member, a member of the Socialist Campaign Group, a supporter of a United Ireland and has campaigned against Gaza-Israel conflict.

This event was organised in partnership with the London Kurdish Institute.

Dr Ismail Besikci gave an extensive talk in the packed committee room. He reviewed the history of the Near East with regards to Kurdish identity and identity of Kurdistan. Dr Besikci argued that the ancient peoples of Anatolia of the Near East went through a process of destruction, which was due to the Community of Union and Progress’ project of turning the Ottoman Empire into a vast area where only Turks lived.  Besikci stated that beginning with the Balkan War in 1912, a systematic state terror against the Greeks, the Armenians, the Kurds and the Alevis occurred and today’s Turkey was built on the destruction of these peoples.

Dr Besikci asserted the Kurdish issue is a question of territory. The Kurds’ right to self-determination, he argued, was denied in the 1920s by the four then imperial powers, Britain, France, Turkey of the old Ottoman Empire and Iran of the old Iranian Dynasty. Besikci stated that the discussions on the destruction of the Kurds were perhaps held in one of the committee rooms of the House of Commons as these four powers collaborated to divide and share out Kurdistan among different states. Besikci suggested that freedom of expression regarding the Kurdish history is not an issue only in Turkey, but also in Britain and France with regards to investigating what really happened behind closed doors at the time.

Dr Besikci referring to the European Union, the Council of Europe and the United Nations argued that these unions dismiss the existence and rights of an estimated number of over 40 million Kurds in the Middle East although they have member countries of which populations less than a few million. He indicated that the right of nations to self-determination which is an essential principle of international law have not applied to the Kurdish people. Hence, he added, the international order established in the 1920s is an anti-Kurdish order.

He concluded with remarks over the huge price that the Kurds have paid for rights and freedom in the last 30 years.