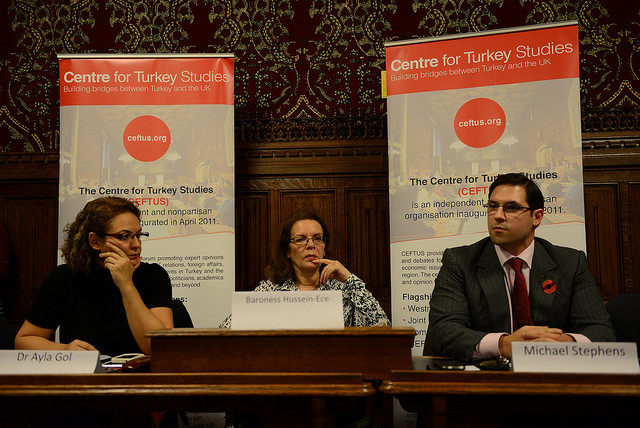 Co-chairs Baroness Hussein-Ece and Dr Ayla Gol of Aberystwyth University opened the debate in the packed committee room. First speaker Bill Park made an analysis of the current issue with a focus on the role of Turkey and the Kurdistan Regional Government (KRG) in the current crisis. Mr Park reminded that both the United States and Iran had backed Al-Maliki government in Iraq despite the Turkish government’s and Barzani’s warnings of Al-Maliki’s sectarian politics. Mr Park added that the US, Iran and other regional actors including Turkey had not foreseen the rise of jihadists in the region until the fall of Mosul and Sinjar beheadings of Americans in the summer.

He argued that the biggest mistake that Turkey made was to become so fixated on the overthrow of Assad and they remain to do so. Park suggested, however, that Turkey has made things ‘right’ after a number of years, by improving relations with the KRG and recently allowing the Iraqi Peshmerga to cross into Kobane, which could indicate a change of Turkish policy over Syria. Mr Park referring to an argument by Omer Tastekin of Washington Brookings who said that President Erdogan is said to be not tactical on the Kurdish issue, but political so as to acquire support for a presidential construction. Mr Park said ‘I do not know if I buy into that Erdogan is so tactical and that if he needs a presidential constitution because he behaves presidentially under the present constitution, but even at the same time, it is interesting to ask oneself the question whether his apparent readiness to take some quite serious risk with the domestic Kurdish peace process is driven by much narrower political calculations to do with the future of his own power”.

Mr Park argued that the relationship between Kurdish parties in the region, the KRG, the Democratic Syrian Party (PYD) and the Kurdistan Worker’s Party (PKK) should be interesting to follow as Barzani, despite his position, has lost some credibility as a result of the recent crisis in Kobane. Mr Park concluded his speech by indicating that ISIS is only the top of the iceberg in the region as the root of the issue is radical fundamentalism of Sunni and Shia militancy and the international coalition must defeat this ideology in order to stop emergence of more ISIS-like jihadists groups.

This was followed by Mr Gareth Winrow, who began by arguing that one cannot separate internal and external policies when it comes to Turkey and the Middle East. To demonstrate this, he outlined a number of questions pertinent to the current debate. He asked if Erdogan is somehow trying to gather Kurdish support within Turkey, and what the role of Abdullah Ocalan currently is, if his popularity is increasing or if there is the possibility that he might be bypassed. Other questions that, according to Mr Winrow, we should keep in mind are whether we will begin to see inter-Kurdish rivalry, whether Erdogan’s commitment to seeing the overthrow of Assad is somehow linked to his approach to the Alevi community within Turkey and, more importantly, what the role of ISIS inside Turkey is.

He argued that, due to Turkey’s bid for non-permanent membership of the UN Security Council, Turkey could be slipping into what he called ‘dangerous loneliness’, a form of isolation within the international community. He used as an example the fact that, with regards to the conflict taking place in Syria and Iraq, Erdogan has stated that he disagrees with the position of key players such as the USA, Russia, Iran and Syria. The recent airdrop over Kobane could be further indication that Turkey is being ignored by relevant players.

Last speaker Michael Stephens began his speech by looking into the importance of Kobane, a city which was of little or no strategic or administrative importance, but which nonetheless has become the centre of the struggle against ISIS. He argued that Turkey had fallen behind in this conflict because it did not realise the qualitative shift in the fight: both the YPG and ISIS realised that they were faced with an existential PR struggle as much as a strategic one. More importantly, Turkey failed to realise that with the appearance of the international coalition bent on defeating the Islamic State, there had also come a change in playing field. Turkey’s decision to post tanks above the hills of Kobane strained its relations with its NATO allies and allowed Kobane to take on the image of Stalingrad. The emotional sentiment that was thus attached to the Kurdish city gave it strategic importance – it has become the line which the international coalition has drawn, and beyond which it will not allow the Islamic State to cross.

Mr. Stephens went on to argue that there is another aspect of the qualitative shift which Turkey failed to detect, this time concerning the PYD. He argued that the PYD had gone from being an organisation linked with the PKK and difficult to get a hold of, to hosting Western strategists and military operators in the region; a shift which reflects the fact that the USA has now committed itself to the protection of Syria and Kurdistan. Mr. Stephens ended his speech by stating, however, that Turkey’s recent decision to allow Peshmerga forces to cross into Kobane is indicative of a quantitative shift in the nature of Turkish power in Kurdish politics.