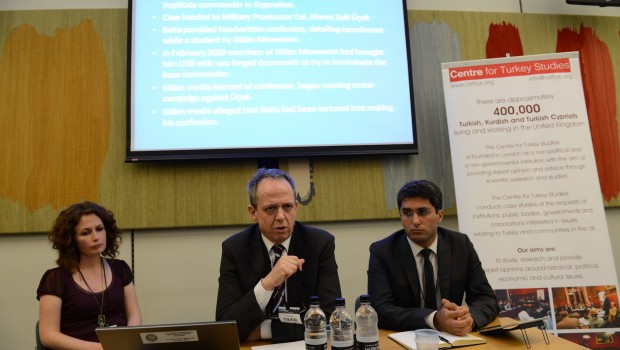 Chair: Ms Buket Bora of the Centre for Turkey Studies

This CEFTUS debate was kindly hosted by Andy Love Labour MP for Edmonton.

Gareth Jenkins and Guney Yildiz respectively presented detailed analyses of politicisation of justice, dynamics of several political agents in the run-up to presidential election 2014 and prospects for democracy and stability in the future.

The Ergenekon and the Balyoz court cases

Mr Jenkins’ speech was titled as ‘the politics of justice in Turkey: Ergenekon and beyond’. Jenkins went back on several controversial court rulings in Turkey. The Ergenekon court case, he stated, is the most famous one, but there are a lot of other cases which are very similar to it. He asserted that all these cases started with anonymous tipoffs (telephone calls, letters, emails…) and that they relied exclusively on digital evidence. Jenkins argued that much of evidence was clearly fabricated, which involved massive indictments of top-level personalities.

Jenkins pointed out that Ergenekon is the name given to an alleged secret terrorist organisation centrally controlled by the military, trying to create chaos and trigger a military coup against the government. However, there has been no real evidence that this organisation exists. In the end 251 persons were convicted, 16 to life sentences. The case is now pending to go to appeal.

Gareth Jenkins stated that the case Balyoz (Sledgehammer) is very similar to Ergenekon. The military has been once again accused, after the Gülenist newspaper Taraf claimed having found evidence of a coup plot. All evidence, Jenkins asserted, has been however concentrated in one CD, which contained a lot of anachronism, referring to entities or institutions that did not exist at the time, and using Microsoft Office 2007, a version that was not yet released. 331 persons were sentenced to a long jail time. Recently, all convicts have been released after a decision of the Constitutional Court which recognised that their rights to a fair trial have been violated. They are now waiting for a retrial.

Smear campaign against the MHP

Following to depicting the controversial cases, Jenkins indicated another case of smear campaign against the Nationalist Movement Party (MHP) officials. He stated that sex tapes were released against MHP officials, which lead to the resignation of 10 of them. The videos were very professional, which is a result of extensive surveillance and home burglaries. However, he stressed, no investigation was led to find out how these videos were made. Jenkins argued that there are reasons to believe Gülenists (followers of the US based scholar Fettullah Gulen) were at the origin of these videos. All the persons targeted were enemies of Gülen, and the cases were broken down by Gülenist media, which led defamation campaigns against those who questioned the information. Gareth Jenkins suggested that all these cases targeted common enemies of Fettullah Gülen and Turkish Prime Minister Recep Tayyip Erdogan, but Gülen started to fear that Erdogan became too powerful. In November 2013, Erdogan announced his intention to close the dershanes (preparatory cram schools) which are a major source of income and recruitment for the Gülen movement. In December 2013, the first corruption probe against Erdogan and his associates started, followed by a second. Erdogan then intervened and led massive purges in the police and judiciary against the suspected members of the Gülen movement. Jenkins pointed out that there is a huge contrast in the way Erdogan reacted when himself was targeted compared to when others were.

Erdogan and Polarisation of Politics

Following to Jenkins’ speech, Mr Güney Yildiz analysed the notion of the polarisation of Turkish politics and society. Yildiz argued that while PM Erdogan is the one benefiting the most from this polarisation, he is not the one who started it. Yildiz stated that Turkish society has been polarised since the foundation of the Republic and that Turkish politics are marked by a profound ideological dichotomy between Kemalism and political Islam. However, Yildiz suggested, Erdogan knows how to conduct and strengthen this polarisation to turn it into his advantage. It has proven to be a very effective strategy to mobilise its supporters and win the elections. Yildiz stressed that however, this strategy is detrimental to Turkey’s general well-being and that it creates too much tension in Turkish politics, and also prevents a full development of Turkish economy. According to Yildiz, Erdogan needs to use this polarisation, because he fears that the legitimacy of the ballot box will not be enough to maintain him in power. He has learned his lessons from the past: the execution of a former Prime Minister Adnan Menderes after the military coup in 1960, banning another former PM Necmettin Erbakan from politics after 1997 post-modern coup, and internationally, the removal of elected Mohamed Morsi in Egypt after the coup led by military general el-Sisi. Thus, Yildiz contended that Erdogan needs to have ‘militant’ supporters, ready to fight for him. Erdogan did, for instance, encourage his supporters to take to the streets during the Gezi protests, when Gezi protesters started to ask for the resignation of the government.

Peace Negotiations in the run-up to Presidential Election

Güney Yildiz in the second part of his speech elaborated on the peace negotiations with the PKK in the run-up to presidential election in August 2014. Yildiz gave an interesting analysis of why Erdogan decided to start peace negotiations with the Kurdistan Workers’ Party (PKK). According to Yildiz, the war against the PKK had to end for rationalist reasons as it was too expensive, and Erdogan was unable to fight his opponents from the Gülen movement, the military, the Gezi protests and the PKK at the same time. Yildiz indicated that the PKK has not taken advantage of these crises that Erdogan encountered, which helped building trust between the organisation and the government.

Conflict of Power and Alliances

Yildiz further argued that peace negotiations have been marked by a power struggle between Islamists political actors. The Gülen movement, Yildiz contended, was not opposed to a peace process, and has always been progressive as regards cultural rights of the Kurdish people. Gülenist media, for instance, were the first to broadcast in Kurdish language; they supported language rights being granted without negotiations. Nevertheless, Gülenists have a more antagonistic position towards the PKK than the Justice and Development Party (AKP). Yildiz added that Turkish politics are characterised by an alliance game between these actors. The AKP and the Gülen movement first allied trying to eradicate the PKK, but failed. This alliance is broken and an unconsolidated alliance between the AKP and the PKK has formed. The AKP and the Gülen movement were initially enemies and they were able to ally as long as they had common enemies, but, Yildiz argued, this alliance was not meant to last.

Guney finished his speech with comments on Erdogan’s success as a leader for over a decade. He stated that Erdogan has been through several political crises, and is not left without opponents. Yet he remains a successful and popular leader as he led his party to an electoral victory at the municipal elections in March, despite the corruption scandals that incriminated him and several government members. Yildiz asserted that the AKP won mainly thanks to Erdogan and what he represents, rather than to the electoral campaigns of the local candidates. If he is elected President, Yildiz added, he will certainly be more powerful than his predecessors, given his personality first and the fact that he will be the first elected President by the public. Guney suggested that Erdogan has lately often been called a ‘dictator’, yet this accusation is deemed unfair by the majority of Turkish electorate who remains faithful to him.

Güney Yildiz questioned the legitimacy and efficiency of the Gezi movement. He underlined the fact that even though Gezi protesters came together at one point, they did not have enough in common to make the movement last. This broad coalition was not effective to counter Erdogan. Moreover, Gezi movement did not have any leader. The people elected to form Taksim Solidarity did not have any authority on the protesters. Gezi did not appeal to lower classes of the society and the majority of the Kurds, concerned about preserving the peace process. Calling for the resignation of Erdogan was a mistake, according to Yildiz, because Gezi was meant to be a social protest and not a revolution.

Gareth Jenkins, on the other hand, underlined the originality of the Gezi movement, as the first bottom up social protest during which people tried to directly take control. The diversity of the movement however made it clear that it was not going to lead to anything. He also referred to the danger of polarisation as half of the population unconditionally loves Erdogan that they believe his words and at the height of Gezi protests, his supporters were ready to fight for him, which Erdogan himself incited.

Is the Gulen Movement scapegoat for all the wrongs in Turkey?

Mr Jenkins stated that the Gülen movement has certainly been used as a scapegoat in several scandals by the government. He added that the opacity of this organisation helped raising suspicion in the public opinion that the Gulenists have acted as a ‘parallel state’. But, Jenkins asserted, in the end a lot of innocent people lost their jobs due to the purges led by the AKP government.

Guney Yildiz said that Kurdish organisations have a role to play in fighting against ISIS. Hence, Turkey might get closer to the PKK, the Syrian Democratic Union Party (PYD) and the Iraqi Kurdish Regional Government (KRG) in this process. Turkey has exported oil to Iraq to help with the shortage created by the closing of a refinery by ISIS. Yildiz asserted that ISIS represents a direct threat to Turkey as it controls border gates with Turkey and there is a risk of suicide attacks on Turkish territory.

Both speakers argued that PM Erdogan’s personality does not allow sharing power with others, as Erdogan has an autocratic style of ruling and he tends to micro-manage in order to get involved in minor issues even though he is the Prime Minister. Guney Yildiz further argued that Erdogan is getting more and more detached from reality, and is becoming isolated even within the AKP. Erdogan has surrounded himself with close counsellors, but he does not have a lot of people to trust, as shown by the involvement of his family in his political affairs. Yildiz added that this is an inevitable result of polarisation, but he will most likely continue to further polarise Turkish politics.

Gareth Jenkins suggested Erdogan does not only wish a presidential system for Turkey instead of the current parliamentary system, but he wants an ‘Erdogan system’. However, Jenkins argued, there is no justification whatsoever why this would be beneficial to Turkey. The problem is, he added, what will happen when Erdogan leaves, if Turkey’s political system is specifically designed for him.  According to Jenkins, the Republican People’s Party (CHP) and the MHP’s joint candidate Ekmeleddin Ihsanoglu is not a very strong opponent, but he would still be a good alternative to Erdogan.