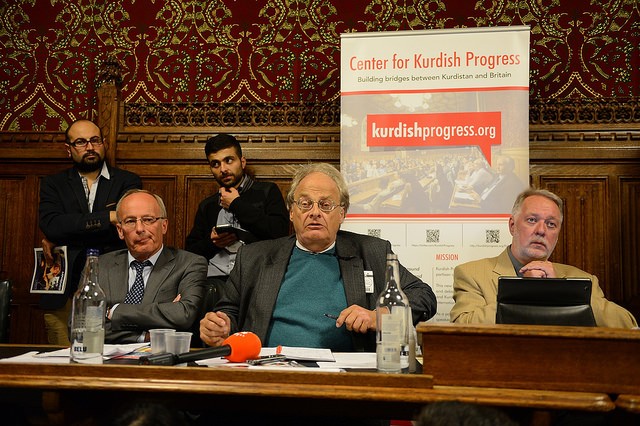 ‘The Crisis in Iraq’: Patrick Cockburn

The author of “The Jihadis Return: ISIS and the New Sunni Uprising” as well as Independent correspondent, Patrick Cockburn’s speech in the Joint Forum ‘the Crisis in Iraq: Unexpected Alliances, Western Intervention and the Question of Kurdistan’.

“Thank you very much. I have been around the block in Kurdistan, first went there in 1979. Listening to other speakers, I thought, perhaps one can be a little too over-pessimistic.

When I first went to Kurdistan at that time it was ravaged. The leadership was in flight, tens of thousands of people were being tortured and driven from their villages. The achievements have been extraordinary since that time. People often ask me why of all revolts and rebellions in the Middle East failed, normally they are talking about 2011. I said, well actually you are wrong, the Kurdish revolt has succeeded in its succeeding and I am sure despite this development of this sort of ‘Islamic Khmer Rouge’ in the shape of ISIS that the Kurds will succeed again.

But it is going to be a long walk, do not be taken in by this wishful thinking that somehow ISIS are the shock troops of the Sunni community and that once a deal can be arranged with the Sunni and Iraq, that they are going to get rid of ISIS. I mean just think of it in practical terms: these are people who kill any of their enemies. They have taken 300 hostages in Mosul, in Der Zor, in Syria. A tribe who proposed them, they took 700 members out and slaughtered them. These people are not going to go away, they are expecting a stab in the back, they are extremely paranoid and very well organised.  This is going to continue.

Why did it happen? Well, exactly I remember over the recent years, the last two three years, Hoshyar Zubari the Foreign Minister, very recently a day ago, in Baghdad, saying if the Saborian Syria goes on it is going to destabilise Iraq. If there is a revolt among the Syrian and Sunni then that is going to ultimately lead to a renewal of the war in Iraq. And it has happened, people, I think, in Western capitals in much of the world did not take this seriously, but it was true.

How can this war be ended? Very difficult,  but keep in mind that it was really what happened in Syria that destabilised Iraq. Everything now is being blamed on Nouri al-Maliki and a lot of it rightly, I think he was a terrible leader. But what really destabilised Iraq was what happened after 2011 in Syria, that is the major constituency of ISIS. Iraq is 20 percent Sunni Arab, approximately Syria is over 60 percent. This is where they are going to get most support. And where is the West and others in this? Well, I think by not making enough effort to end the war in Syria, ISIS is the creature of war. You do not get organisations: mixture of fanaticism and military expertise coming out of any accentuation except to extended war.

And how could this war be ended?  Well, I think the West has to take decisions on whose side they are on in Syria. The main opponent of ISIS, the largest military force opposing ISIS is the Asad government. The second one is the Syrian Kurds. But what is the policy of the West is to weaken and displace Asad which is rather similar to that of ISIS and it still denigrates the Syrian co-worker to have fought with incredible heroism against ISIS for the last two years as terrorists! This sort of bizarre situation plays into the hands of ISIS.  Now it is very easy in the last month, I spent first half of the year writing a book about the expansion of ISIS which was pretty obvious…, but you know now everybody is talking about it. But I worry slightly that all this great clouds of words, the practical things are not done, practical decisions are not taken.

There are practical things that needs to happen: The Turkish border needs to be closed: enormous pressure should be put on Turkey to close this border to ISIS and to all other jihadists. People here and in America say, ‘oh well, will ISIS ultimately threaten the homeland in Britain or in America? Well, they don’t have to go that far, you know’. Two and a half million British tourists go to Turkey every year, it is very easy to cross the border. It used to cost you like ten dollars to get a guy to take you across to the Turkish-Syrian border and now the great pressure has been put by Americans to Turkey and it is up to twenty five dollars for every party to crossover, it is not exactly sealed off.  These things can be done, they will be done again and again in dealing with ISIS.

Over the last two years, I felt that always it has been too late and the people who have suffered and people have died because of this. the Yezidis, the Shabak, the Shia and the Kurds, so they have paid a price, but if this goes on we will pay a price, too. Thank you.”