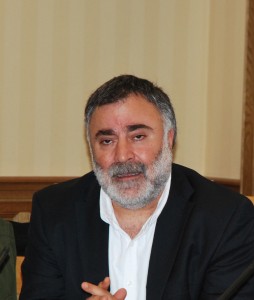 Mr Eyüp Burc is a journalist. He currently works as the leading co-ordinator of IMC TV, a news channel of which he was a founding member. He graduated from Istanbul Pertevniyal College. He studied Philosophy at Ankara University and Sociology at Bielefeld University. Burc wrote columns for Özgür Gündem daily, Özgür Politika daily and Azadîya Welat daily. He was a founding member of the first Kurdish TV channel, Med TV, which began broadcasting in 1995 in Belgium. He worked as an editor, reporter and moderator for Med TV for many years. He speaks Kurdish,Turkish and German.