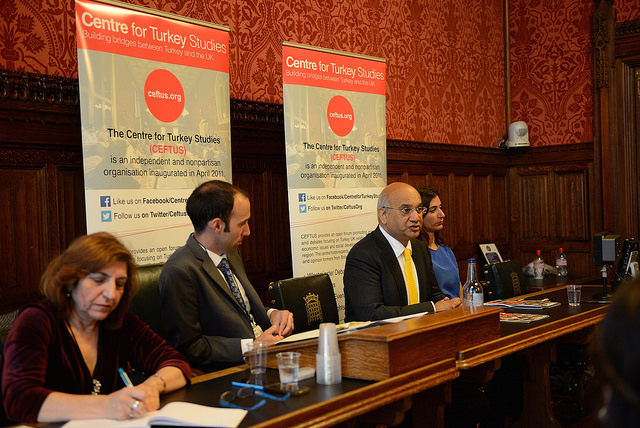 The event was kindly chaired by Mr Michael Daventry, Editor of the English section of Londra Gazete.

Keith Vaz opened the event discussing the importance of CEFTUS’ work in building bridges between the UK and Turkey especially in the light of the refugee crisis caused by the Syrian conflict. He was critical of the lack of support for Turkey in its taking a huge burden in accepting large numbers of refugees and announced that the Home Affairs Parliamentary Select Committee, of which he is Chairman, would be travelling to Turkey to visit refugee camps there. He also mentioned the Turkish diaspora and its importance in Britain and the contributions made by the Turkish-origin community to the UK, and expressed a great deal of support for the 1963 Ankara Association Agreement.

Mrs Yesildaglar gave a presentation on social and legal aspects of Turkish Migration. She noted that around 5.5 million Turks (including Kurds and Turkish Cypriots), are in Western Europe, and that around 250,000 Turkish speakers are found in the United Kingdom, this figure however, she said, was more formal and she continued to state that there could be up to 500,000. She stated that other European countries often made bilateral labour agreements with Turkey and Turkish workers came in large numbers to fill gaps in the labour market. In the UK however this was not the case, rather, Turkish Cypriots migrated between 1945-55 and later came as refugees following the 1974 War. She also noted that others from mainland Turkey came as individuals seeking employment (not masses of labourers like elsewhere) and later were re-united in Britain with their families. She stated that these migrants often take up roles in sectors such as the restaurant and jewellery trades. Most Turkish speaking migrants according to Mrs Yesildaglar are Sunni Muslims, but other groups such as Alevi Muslims and those classified as “Secular” by British authorities also have sizeable presences. She added that educational attainment is generally low in these communities, but younger women are achieving higher standards of education, going on to university and taking up roles as professionals in the NHS or in the legal sector. She continued, noting that Turkish-origin migrants can often create a parallel society within Britain and that their needs are generally met by members of their own communities and therefore do not feel the need to interact with the wider British society.  She stated that Turkish migrants have a quasi-status in the privileges afforded to them by the Ankara Agreement, not quite the same as an EU member state but greater than that of other non-member states, for instance Turkish citizens are able to take their cases to the European Court of Justice.

Expert in immigration rules, lawyer Ms Patsalos stated that immigration has changed immensely over the last ten years and that immigration rules have become stricter, she noted that the recent coalition and Conservative governments have aimed to restrict as many visas as possible, but have not restricted the Ankara Agreement. Moreover, she also commented that  Turkish migrants are also not required to sit a ‘Life in the UK’ test like other migrants, and instead simply have to show that their level of English competency is of a high enough standard.

Our final speaker, immigration solicitor Mrs Ersan stated that while EU accession negotiations with Turkey have resumed, successful accession is unlikely, despite Turkey’s accession being strongly supported by the UK, especially given the resumption of the conflict between the Kurdish guerilla movement the PKK (Kurdistan Workers’ Party) and Turkish military forces. She noted that Turkey has taken around 1.7 million refugees from Syria and noted that European countries including the UK stand to gain by taking in refugees in higher numbers, as these individuals are likely to start businesses and use their often high levels of skills to benefit the wider societies.

The speeches were then followed by a question and answer session.