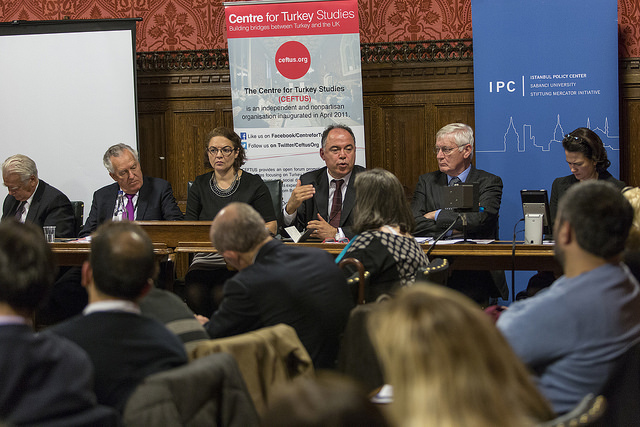 The debate began with Mrs West’s opening speech where she pointed out Turkey’s role in hosting Syrian refugees fleeing from war and referred to Turkey’s geographically and politically strategic importance in the region and especially, in the fight against ISIS.

In following, our first keynote speaker, Professor Fuat Keyman stated that by returning a Justice and Development Party (AKP) government at the polls during the November election, Turkey’s voters chose stability and a strong government.

He stated that with its successive electoral victories, the AKP has consolidated itself as the dominant party in Turkey, and that could also even win the next set of elections in 2019. This, he argued, has meant that any discussion of Turkish politics has the AKP as its main reference point.

He argued that at an individual level, the main winners of the November elections were Prime Minister Ahmet Davutoglu, who has won a significant share of votes for the AKP and President Recep Tayyip Erdogan whose desired presidential system and constitutional reforms will now be discussed by the new AKP majority government, which in turn has led to beginning of a “New Turkey”. He stated that this may not be healthy for Turkey’s politics.

He noted several problems that Turkey is facing. One of which he mentioned was the refugee crisis, which he argued did not affect the result of the election, in spite of the country’s having taken in 2.3 million refugees from Syria. In Professor Keyman’s view, this was a positive development, showing a lack of xenophobia in the Turkish population. He continued stating that intertwined with the refugee problem were those presented by the so-called Islamic State (ISIS) and “failed” or “non-state” problems in Iraq and Syria. These problems are triangular according to Professor Keyman, meaning that the refugee crisis as a problem for Turkey is being perpetuated by the erosion of the Syrian and Iraqi states which in turn has assisted the rise of IS which has been forcing many Syrians to flee. He added that Kurdish autonomous cantons in Syria has presented Turkey with additional confrontation, and also that Turkish society is becoming increasingly polarised which has created mistrust between the government and Turkish society.

He concluded stating that AKP’s electoral victory presented the party with a second chance, to govern rather than rule, and to lead rather than having hegemony, which would help it to tackle Turkey’s problems in a more meaningful and effective way.

Lord Peter Hain began by discussing Turkey’s pivotal political role in its location between Europe and Asia. He stated that in 2002 when the AKP first came to government, there was a great deal of hope in Turkey that democratisation would follow; this according to Lord Hain was not to be, he stated for instance that deteriorating Sunni-Shi’a relations, anti-Kurdish sentiment and an increasingly authoritarian government had undermined this hope. He also expressed disappointment at Turkey’s policy towards the Syrian conflict in its viewing the fall of the Bashar al-Assad regime as the primary objective, rather than defeating IS. He did however express positivity regarding the pro-Kurdish Peoples’ Democratic Party (HDP) that he argued could serve as a progressive actor in that it would benefit a successful peace process between the Kurdish militants the Kurdistan Workers’ Party (PKK) and the Turkish government in a style similar to that conducted by Britain during the Northern Ireland peace process. He concluded that Turkey could still play a pivotal role in the Middle East Crisis if it altered its policy towards ethno-religious minorities within Turkey, and IS outside the country.

Lord Owen began by discussing the situation of the Turkish economy and its relationship with the European Union and European Economic Area. He stated that Turkey should be allowed to join the European Economic Area next year, to show that Turkey, as a Muslim-majority country, is welcome in Europe. According to Lord Owen, this economic partnership would help overcome political issues between Turkey and the EU, which would help a new Turkish accession process. He concluded that this would benefit Turkey and the EU in these changing times.

Lord William Wallace discussed the nature of the AKP as a grassroots and more socially representative party when it first came to government, in comparison with the other more traditional top-down parties. He gave an anecdote of a trip to Istanbul on which he heard a speech from President Erdogan, during which an AKP MP sitting next to him had said that he no longer intended to stand for election again as he felt that the AKP had transformed into something he no longer believed in. Lord Wallace concluded stating that for Turkey’s benefit, the Turkish government ought to preserve and encourage its democracy by allowing for greater dissent and more opposition voices to be heard.

The speeches were followed by question and answer session.