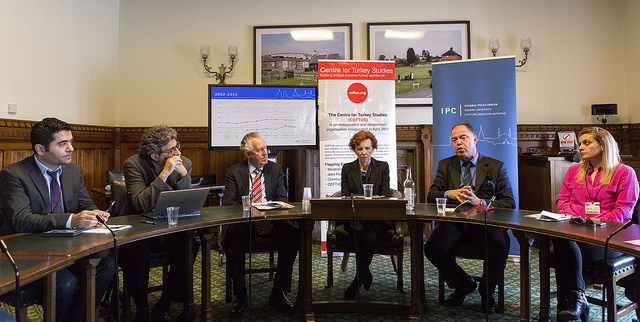 This roundtable was part of CEFTUS and IPC consecutive meetings in London and in Istanbul on “Post-Election Turkey.” The meetings with expert panels aim to elaborate on Turkey’s domestic dynamics and foreign policy following the general elections.

Hosted by Keith Vaz MP, this event was kindly chaired by Baroness Jan Royall. This was an exclusive roundtable and conducted under Chatham House rules.

Baroness Jan Royall in her opening speech emphasised the important role that Turkey plays with regards to critical developments in the region.

Lord Peter Hain in his speech concentrated on the outcome of the November 2015 elections and the implications of Turkey’s foreign policy in the region. He referred to Turkey’s pivotal role with regards to Syrian refugees. He also shared his views on the emergence of the People’s Democratic Party (HDP) and how vital it is for the peace process that both the state and the Kurdish armed and political groups remain tolerant to each other. He indicated that only an inclusive government can achieve the ambitions of the peace process.

Prof Fuat Keyman analysed Turkey’s domestic and foreign policy. He argued that despite the government’s somewhat totalitarian outlook, one party government may provide stability for Turkey and the region providing that democratic reforms are introduced. He analysed the issues surrounding Turkish foreign and domestic policies with regards to fight against ISIS, Turkey’s neighbours being ‘failed-states’ and the refugee problem. These issues, he argued, are all in relation to each other and affect not only Turkey but also Europe.

Prof Izak Atiyas outlined Turkey’s economic growth over the last decade. He stated that despite high productivity in economy with new growth centres and structural changes for improvement in income distribution, industry has not become more productive and there has been a drop in employment in agriculture. Prof Atiyas also referred to questions over independence of the Turkish Central Bank and polarisation in business community due to the conflict between the AKP and the Gulen movement. He stated that a reform package which will invigorate the economy is expected after the November elections, but how this will manifest is not yet clear.