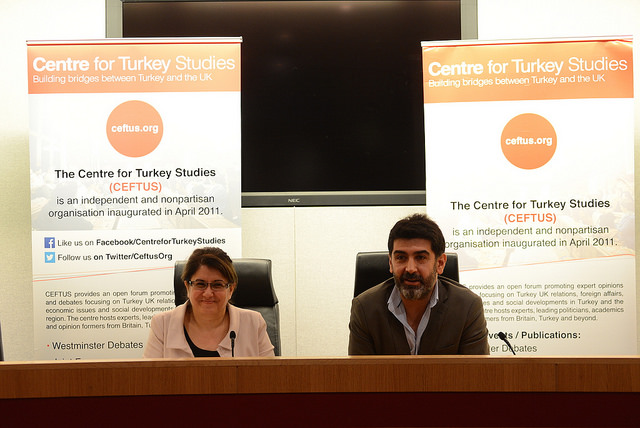 The Centre for Turkey Studies’ public forum with columnist Mr Levent Gultekin welcome many members of the Turkish and Kurdish communities in London. This event was kindly chaired by Solicitor Serpil Ersan.

Mr Gultekin’s began his speech by elaborating on the fact that states often create an “other” so as to advocate or prescribe the adoption of an ideal identity. He said that the Turkish state and its espoused Kemalist ideology created the notion of its own enemy, i.e. religious conservatives and non-Turkish peoples such as Kurds, which has traumatised people and communities over many decades.

According to Mr Gultekin, religious conservatives were affected by this approach. Although they had to go through a struggle for freedom from state oppression for decades, after gaining power through elections, they lost their innocent intentions of advocating further democratisation.

Mr Gultekin stated that Turkey’s state structure is based on power relations that only favour the strongest party, and curtails the development of ethical individuals in the wider society. Instead, he said, these individuals lose their potential and become ideological and closed-minded. He said that Turkey’s current situation was terrible and feared that it would get worse. He also expressed concern that Kurds might increase their share of power and may, like the religious conservatives upset the balance and abuse their power as well.

He argued that the nature of Turkish politics has traditionally been to cover one’s own back, rather than take care of the wider the society. He continued stating that now President Recep Tayyip Erdogan has immense power, even absolute power over the political system in place, which is designed to preserve such positions.

Mr Gultekin stated that at the same time, the opposition has failed to provide a viable alternative, and had only criticised the President. He also accused the opposition of lacking integrity and intellect to carry out their roles in opposition effectively.

Mr Gultekin argued that the key outcome in Turkey as a whole ought to be the creation and preservation of a functioning democracy, and that classifying and compartmentalising issues into categories such as “Kurdish” or “Alevi” runs counter to this process as it presents a distraction from the overall goal. He finished, stating that Turkey’s current undemocratic condition presented a problem to people of all ethnicities and political, ideological and religious orientations in the country.