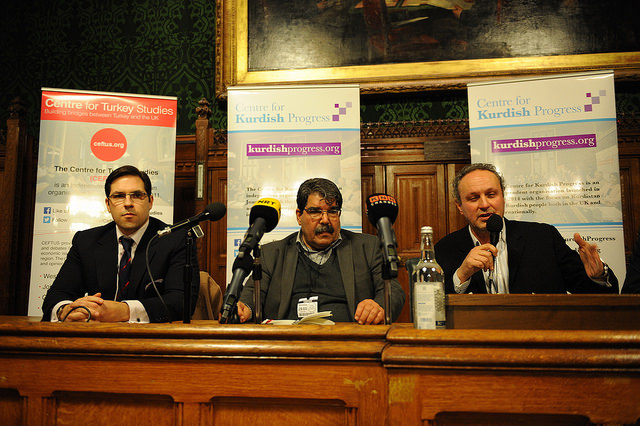 The Centre for Turkey Studies in partnership with the Centre for Kurdish Progress held a public forum with keynote speaker Salih Muslim, co-chair of the Kurdish Democratic Union Party (PYD) in the House of Commons. Hosted by John Woodcock Labour MP for Knowsley, the forum’s other speakers were Mr Michael Stephen of Royal United Services Institute (RUSI), Dr David L. Philips of Columbia University’s Institute for the Study of Human Rights, Dr David Graeber of London School of Economics (LSE) and Dr Johanna Riha. Dr Tunc Aybak of Middlesex University chaired this debate.

In the packed committee room with over 200 guests, keynote speaker Mr Muslim spoke first, and detailed the developments in Rojava over the recent years. Mr Muslim referring to Kurds’ long-haul struggle for freedom in Kurdistan stated that an opportunity for democracy and rights for the Kurds arose in 2011 when the Syrian uprising began. He indicated that the PYD used this opportunity to organise Kurds in Syria in order to survive the conflict and achieve democracy ideals and that they knew that the regime in Syria was not going to be ousted too quickly. Following to securing Kobane, Mr Muslim said that the PYD reached out to the other ethnic and religious groups including Arabs, Assyrians, and Muslims and Christians to form a committee. This committee, he said, was to establish a self-governing canton in which gender equality was a primary principle.

Due to rise of Islamic State (ISIS) in the region, Mr Muslim stated that Kurds had to enter another war and fought not only for the Kurds, but also for the West, as he added, ISIS aims to attack universal freedoms and rights of all, not only Kurds’.

Mr Muslim argued that the self-governance in Rojava brings about radical democracy as it empowers communities as opposed to the nation-state system in the West. Hence, he suggested that Kurds are still fighting for democracy, freedom, gender equality against ISIS on the front lines. Reminding the attacks in Paris, he warned that the jihadists might commit further atrocities in the West as they want to destroy democracy not only in the region but also in the West. Mr Muslim added that they need humanitarian help and requested solidarity from all pro-democracy powers and organisations in order to defeat ISIS and its jihadist mentality. He lauded international volunteers; Ivana Hoffmann, Ashley Johnston and Konstandinos Erik Scurfield: from Germany, Australia and the UK who sacrificed their lives in Kobane fighting alongside the Kurds.

The second speaker Mr Michael Stephens argued that the West having to been used to the nation-state ideals finds self –governance model in Rojava quite difficult to comprehend. Hence, he argued, the western countries seem to be slow in reacting to the developments in the region and their approach to the conflict in Syria lacks consistency as the PYD is the only group that fought and succeeded against ISIS, but is yet to receive support from the West.

Following to Mr Stephens, Dr David Graeber praised the Rojava revolution as he said that the autonomous self-rule of Kurds in Syria has better democratic features than any other democracies he has seen. Dr Graeber blamed the West for only looking for ways to justify military interventions in the region and ignoring the emergence of Rojava system in which women hold half the authority and each ethnic and religious group has a representative in the committee to determine any decision affecting on their communities. He pointed out the irony in the West by reminding the audience that a British-Kurdish woman, Shilan Ozcelik, who fought for this democratic system in Kobane, have been charged with a terrorist offence and have been remanded in custody in Holloway Prison.

Dr Johanna Riha shared her observations in Rojava in her field trip. She indicated that humanitarian help is urgently required and that transportation of basic supplies through the borders of Northern Kurdistan and Turkey is the most difficult. Dr Riha said that the Rojava’s democratic system emerged as a grassroots movement, which could be a good model for the whole of the region.

The final speaker Dr David L. Philips having worked on Kurdish issues for over 25 years commented that Kurds finally united thanks to ISIS. Dr Philips said that the reason for why the US has not held talks with the PYD is Turkish government’s influence on the US administration. According to Dr. Philips, Turkey has managed to represent the PYD and the Kurdistan Workers’ Party (PKK) as a joint terrorist organisation in the eyes of the US. Dr Philips stated that their research in his institute found that Turkey helped ISIS financially and supplied arms to ISIS and that the role of Turkey in the conflict in Syria has to be re-assessed more objectively.

Following the speeches, the panel answered the questions from the audience.