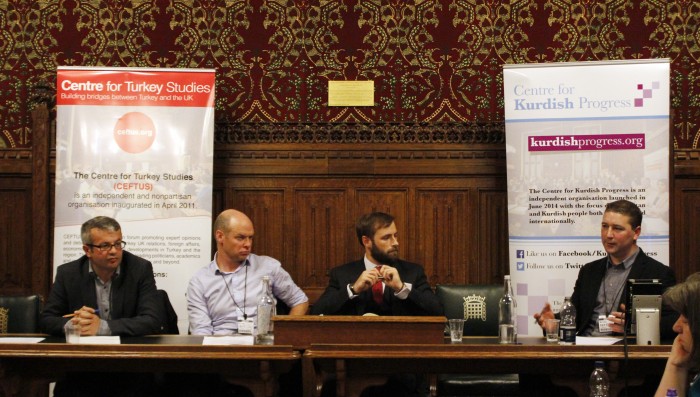 The Centre for Turkey Studies, in partnership with the Centre for Kurdish Progress organised a debate with keynote speakers Dr Cengiz Gunes, Associate Lecturer at the Open University, Mr Robert Lowe, Manager of the Middle East Centre of the London School of Economics and Political Science (LSE) and Mr David Hartwell, Director of Middle East Insider.

The debate was chaired by Tim Eaton from the Middle East and North Africa programme of Chatham House and hosted by Kate Osamor MP for Edmonton.

Robert Lowe opened by discussing the dominant trends in Kurdish nationalism that have emerged during the Syrian conflict following the establishment of the Rojava canton.

He noted that these were, the dominance of the Kurdish Democratic Union Party (PYD), the development of an autonomous Rojava in and of itself, and the internationalisation of Kurdish politics.

The rise of the PYD, he argued was nothing short of astonishing, having formally begun far later than other Syrian Kurdish nationalist movements which came to be in the 1950s, having emerged fairly recently during the 2000s.

He discussed several reasons for this, including the fact that the PYD has been highly disciplined with a clear agenda for its regions, whereas others have been fractious and ill-disciplined. He added that its relationship with the guerilla militant movement the Kurdistan Workers’ Party (PKK) has also assisted its development. Mr Lowe added that the PYD’s being armed is also notable, and something previously unseen among Kurdish political movements in Syria, with the exception of a small popular Kurdish rising in 2004.

Mr Lowe also noted that rather than in other areas with large Kurdish populations such as Turkey, Iran or Iraq, Kurds in Syria had not necessarily sought to have such levels of autonomy as had others elsewhere. This, according to Mr Lowe has changed, and Syrian Kurds under the leadership of the PYD have now been able to wrest power in the present political vacuum, and stated that there is little likelihood of a return to the previous status quo. Mr Lowe added that as a result of this leadership that the PYD is undertaking a democratic ground-up re-construction of government in Rojava.

He also listed several problems that complicate the position of the PYD. He stated for instance that despite its aspiring to democracy, the PYD has often conducted authoritarian and heavy handed governance, human rights abuses such as arbitrary arrests, and the movement’s misuse of the People’s Protection Units (YPG) forces. He added that other problems are caused by the PYD’s having an understanding with the Syrian regime. Mr Lowe also noted that PYD links to the PKK has meant that the movement has had an image problem.

Mr Lowe also discussed the internationalisation of Kurdish Syrian Politics. He stated that many actors presently have a keen interest in Syria, including the PKK and Iranian Kurds who have been supporting the PYD. Within this conflict, according to Mr Lowe, Turkey has been seen by the PYD as its greatest enemy, with the exception of the so called Islamic State (IS). He noted that Iraq’s Kurdistan Regional Government (KRG) has also been hostile to the PYD given its own good relations with Turkey, and that the US has an interest in the success of the PYD, having supported the YPG with airstrikes and arms.

Mr Cengiz Gunes, stated that with the Syrian conflict, the development of a pan-Kurdish politics has occurred, with Turkish Kurds going to join YPG fighters in Syria. He noted that violence has also spilled over the Turkish border, as shown by the attacks of IS on various Kurdish movements within Turkey in Suruc, Diyarbakir and Ankara.

He also noted that the Turkish government has declared that it will not tolerate Kurdish gains in Syria, seeing PYD relations with the PKK as a threat to its own security, given that the Turkish state and this insurgent movement are currently at war. He further expressed doubt about a peace-process between the PKK and Turkey being successful, given that the current state of the Middle East would mean it is unlikely that the PKK would disarm, one of Turkey’s main conditions for peace.

He continued, stating that with attacks by IS on Yazidi Kurds, KRG forces and the YPG had worked together in this conflict, somewhat improving relations between these two groups, which have generally been sour, given the KRG’s strategic and economic reliance on Turkey.

Mr David Hartwell began by stating that Turkish foreign policy relating to the Syrian conflict has been incoherent and inconsistent. He argued that Turkish inexperience in these issues have damaged Turkey’s chances of ascending to be the leading power in the Middle East.

He stated for instance, that Turkey’s focus on defeating Bashar al-Assad and preventing Kurdish autonomy and prioritising these goals rather than defeating IS have caused its aims to diverge from those of Western countries. Mr Hartwell continued stating his belief that it is unlikely that Assad will fall given the role of Russian intervention, which has further stunted Turkey’s aims.
This according to Mr Hartwell has ultimately left the Turkish government reliant on the actions of other agents within the region, rather than being a decisive player, which is now incapable of imposing its diplomatic aims for a post-conflict Syria, having failed to develop a preferred vision.