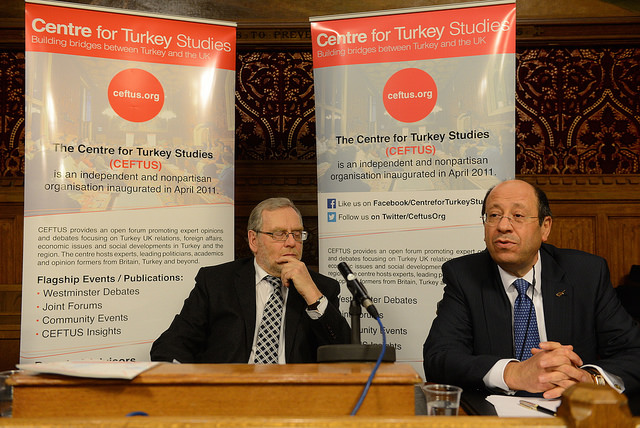 Our CEFTUS Westminster Debate with keynote speaker His Excellency, Euripides L. Evriviades, High Commissioner for the Republic of Cyprus to the United Kingdom of Great Britain and Northern Ireland focused on the role of Cyprus as a member of the European Union in the region and the prospects for a re-united Cyprus.

His Excellency, started his speech by highlighting the importance of geography of the region and emphasised the fact that the European Union, Cyprus and the Eastern Mediterranean, despite their unique qualities, are interconnected with each other.

According to Mr Evriviades, the EU, the single most important humane political experience in the history of the world, protected the peace and stability in Europe and expanded itself to the Eastern Mediterranean through the accession of the Republic of Cyprus in 2004. Mr Evriviades argued that the membership of this divided society provided the EU an access to the Middle East and that Cyprus has been an active and reliable member with regards to EU’s engagements for solutions for peace in Syria and the fight against the Islamic State, also known as DAESH. He added that the result of 2004 referendum was unfortunate with regards to prospects of a united Cyprus.

Mr Evriviades indicated the importance of the discovery of hydrocarbons in the Mediterranean and added that the context has, since then, changed both domestically and regionally. By underlying the fact that such discovery created a new dimension for the negotiations between both Greek and Turkish Cypriot Governments, he stated that hydrocarbons can be the new coal and steel of the EU and become one of the main income sources of the Union.

In the last part of his speech, Mr Evriviades referred to the problems between Turkish and Greek Cypriot sides as issues of security, territorial adjustment and refugees. He emphasised a common national identity and argued that both societies are Cypriots that happen to be of Turkish or Greek origin, which he said, would enhance the contribution of Cyprus to the EU. He added the negotiations for a unified federal state are progressing towards a solution in the near future.

Euripides L Evriviades is High Commissioner for the Republic of Cyprus to the United Kingdom of Great Britain and Northern Ireland as of 04 November 2013. Before assuming this post, he was Deputy Permanent Secretary/Political Director of the Ministry of Foreign Affairs (Jan., 2012–Nov., 2013) serving intermittently as Ag. Permanent Secretary. Prior, he served as Ambassador / Permanent Representative to the Council of Europe (Nov., 2008–Jan., 2012), having also chaired its Rapporteur Group on External Relations (2011). Previously, he was Political Director of the Ministry (2006-2008), having concurrent accreditation to the State of Kuwait, pro tem Nicosia.

Mr Evriviades was Ambassador to the United States of America and non-resident High Commissioner to Canada, serving concomitantly as: the Permanent Representative to the International Civil Aviation Organization; the Permanent Observer to the Organization of American States; and Representative to the World Bank and the International Monetary Fund (2003-2006). He also served as Ambassador to the Netherlands (2000-2003) and to Israel (1997-2000). Earlier in his career, he held positions at Cypriot embassies in Bonn, Germany (1986-1988); Moscow, USSR/Russia (1988-1993); and Tripoli, Libya (1995). On 20 April 2015, he was voted by his peers in London as Diplomat of Year from Europe, an award of The Diplomat Magazine (est. 1947). On 15 January 2006, he received in Washington, DC, the King Legacy Award for International Service, bestowed upon him by the Committee on the International Salute to the Life and Legacy of Dr. Martin Luther King, Jr., A Man for All Nations.