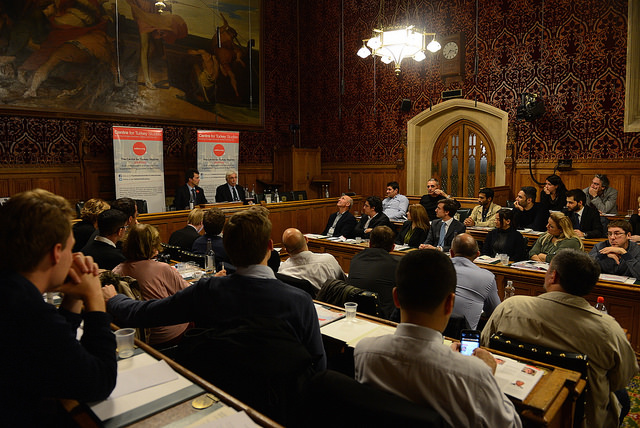 The keynote speaker was veteran journalist and author Cengiz Candar and the event was kindly chaired and hosted by Tom Brake MP.

Tom Brake MP opened the event discussing the strong relationship between Britain and Turkey and how this has grown increasingly important in light of the Syrian Crisis. Mr Brake added that this conflict has led to a potential re-opening of EU accession talks with Turkey.

Mr Candar discussed his previous visits to the UK and speeches at CEFTUS some years ago on the same topic, namely resolution of the conflict between the Turkish state and Kurdish insurgents the Kurdistan Workers’ Party (PKK). He stated that the peace process has evaporated and remains frozen at present. He argued that at the social level in recent times, violence between Turks and Kurds has reached its worst extent.

Mr Candar continued, stating that Turkey’s Kurdish issue has gained greater international significance in the context of the recent Syrian conflict, as the situations of Kurds in both Syria and Turkey have grown increasingly linked, strengthening the causes of one another. This link according to Mr Candar has grown especially important given the establishment by Kurds of the Rojava canton in Syria.

He added that in previous years, the peace process has involved participation on the part of the President and leaders of the PKK, but was neither transparent nor mediated by a third party. Mr Candar then stated that with the 2013 Gezi Park protests, the single party Justice and Development Party (AKP) government was weakened. This, according to Mr Candar, saw the AKP government attempt to assert its strength by neglecting to include a third party, which damaged the process’ structural viability.

Mr Candar continued, to state that in recent months, following the indecisive June 2015 elections, speaking about the Kurdish issue has become an electioneering tactic on the part of the AKP and therefore any current peace process efforts would be lacking in substance and drive. Mr Candar added that presently the pro-Kurdish Peoples’ Democratic Party (HDP), having gained enough votes in June to cross the threshold for parliamentary representation and therefore breaking the AKP’s majority in parliament, now stands as a key obstacle to President Recep Tayyip Erdogan’s aims of achieving an executive presidency. Erdogan, according to Mr Candar, has as a result of this, adopted a more militant, uncompromising and Turkish nationalist stance vis-a-vis the PKK, to try and draw upon the nationalist vote.

He also commented on Kurdish political movements in Syria having received Russian and American support and how this has given Kurds in the Middle East greater confidence, which has also in part affected the PKK in the face of renewed state violence against them and has encouraged them to become more militarily active.

He concluded that a resumption of the peace process could occur if the HDP were to triumph again in the coming November elections, as it could lead to pro-Kurdish legislators participating in government, therefore ameliorating the drive for armed struggle among Kurds.

Mr Candar’s speech was followed by a question and answer session.

Cengiz Candar studied political science and international relations at Ankara University. He began his career as journalist in 1976 in Turkish daily Vatan after living some years in the Middle East and Europe due to his opposition to the regime in Turkey following the military intervention in 1971. An expert for the Middle East (Lebanon and Palestine) and the Balkans (Bosnia and Herzegovina), Candar worked for the Turkish News Agency and for Turkish newspapers Cumhuriyet, Hürriyet, Referans and Güneş as a war correspondent. Currently, he is a columnist for Radikal. Candar served as special adviser to Turkish president Turgut Özal between 1991 and 1993. His interest was drawn to the events during the ethnic unrest in the Balkans between 1993 and 1995. From 1997, Candar lectured for two years on “History and Politics in the Middle East” at Bilgi University in İstanbul. Between 1999 and 2000, he did research work on “Turkey of the 21st century” as a Public Policy Scholar at the Woodrow Wilson International Center for Scholars and a Senior Fellow at the United States Institute of Peace. His description of the 1998 events in Turkey as a “post-modern coup” gained notice internationally, though Radikal columnist Türker Alkan had used the term two weeks earlier.