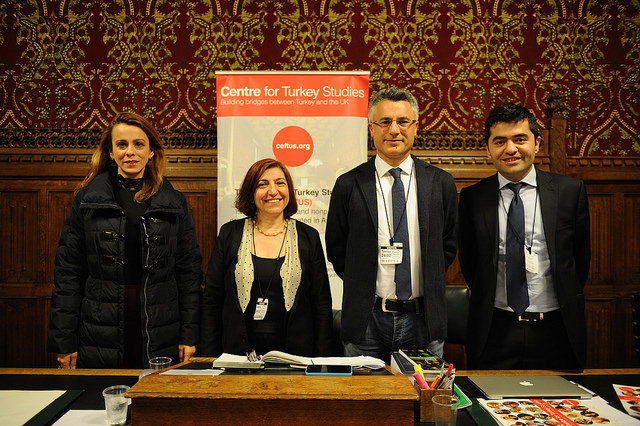 Only three months to go before the General Elections in Turkey, members of the ruling AK Party (Justice and Development Party) shared their analyses on the current developments including the controversial homeland security bill and structural changes after the election such as adopting a new constitution and a presidential system.

Chaired by Mrs Aysegul Yesildaglar of Docklands Academy, this debate was kindly hosted by John Woodcock MP for Burrow and Furness.

Dr Zeynep Karahan Uslu MP for Sanliurfa spoke first, and detailed the priorities of the AK Party in approaching the drafting of a new constitution. Dr Uslu stated that the two overall goals of the AK Party are to make Turkey a more competitive country economically, and to raise Turkey’s standing from a middle income country to a high income country. The second overarching aim is to strengthen the democratic traditions already present in Turkey thanks to the AK Party governments’ reforms over the last decade, and to ensure the impossibility of another military coup, which she identified as the events which have done the most damage to Turkey’s democratic traditions over the course of the Republic. Dr. Uslu pointed to the AK Party’s ending of the military courts established after the 1980 coup and the military supervision of southeastern provinces. Turning to more specific matters, she addressed the concerns over the new security legislation currently being debated in the Turkish parliament. Dr. Uslu characterised the criticism of the bill as baseless and argued that its tenets were in line with those of EU countries, and argued that the AK Party’s security bill was in some ways more democratic and liberal than those in EU countries such as Estonia and the United Kingdom.

Professor Osman Can described flaws contained in the 1924, 1961 and 1982 constitutions, which he believes were unfortunately coloured by social prejudices, and that the legal codification of those prejudices is responsible for many of the social issues experienced in Turkey’s history since the founding of the Republic. The lack of checks and balances in the constitutions, he continued, had allowed the Kemalists to criminalise opposition to their policies. Since 2002, however, these problems have been partially addressed by the AK Party, which was working to bring Turkish democracy up to EU standards. Professor Can stated that the new presidential system that the AK Party is seeking will be superior to the current parliamentary system because it will be able to prevent authoritarianism more effectively and have more checks and balances.

A question and answer session followed the initial remarks by the two speakers.