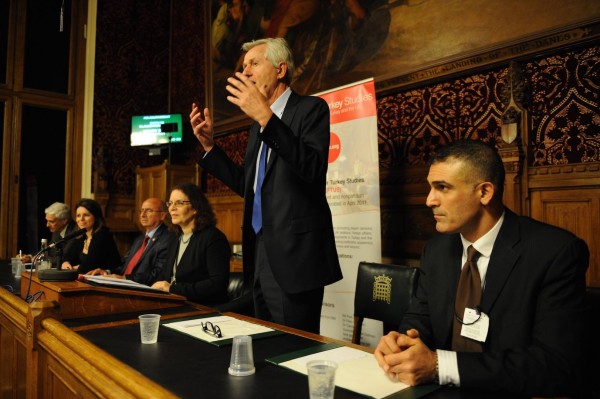 This debate was kindly hosted by Nick De Bois MP for Enfield North and chaired by Baroness Meral Hussein-Ece, the first woman of Turkish Cypriot origin to be a member House of Lords.

TDP Chairman Cemal Ozyigit opened the discussion by recapping the ongoing, start and stop negotiations that have characterised the peace processes in Cyprus since the division of the island. Mr. Ozyigit touched on the February 2014 declaration announcing the renewal of unification negotiations, suspended since 2012, and the most significant dialogue about unification since a failed referendum in 2004. The exploration of natural gas fields in Cypriot waters adds another dimension to the negotiations, and Mr. Ozyigit acknowledged the tensions between the two sides, including the dispatching of warships to the area by the Turkish navy, and controversy over Turkish hydrocarbon exploration.

Hüseyin Angolemli, former chairman of the TDP and currently MP for Famagusta, expressed his view that the monthly meetings being held between the two Cypriot governments have so far been productive. Mr. Angolemli opined that intransigence from both communities was to blame for the historic lack of progress. Like Mr. Ozyigit, Mr. Angolemli believes that the discovery of hydrocarbons in Cypriot territory is an event that has the power to unite the two communities, rather than drive them further apart.

Deniz Birinci, a former candidate of the TDP, detailed her work in increasing dialogue between the two communities at a more grassroots level, including efforts to merge the two football leagues on the island as well as hosting a television program about Greek Cypriot issues for Turkish Cypriot viewers.

Following remarks by the three guests, members of the audience asked several questions that touched on a variety issues relevant to the peace process, including the right of return for displaced citizens, the role of international interests in helping or hindering the process, and the distribution of profits from hydrocarbon exploitation.