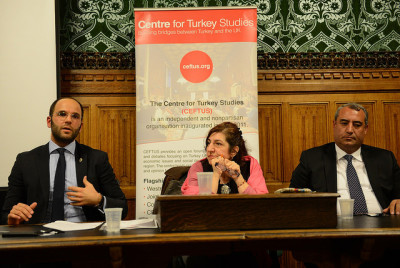 The Centre for Turkey Studies (CEFTUS) hosted a Westminster Debate with the support of Eric Ollerenshaw OBE Conservative MP for Lancaster and Fleetwood. The debate took place in the packed committee room 9 in the House of Commons. Keynote speakers were Mr Faik Tunay Republican People’s Party (CHP) MP for Istanbul and Doc. Dr Muhammet Cakmak, Sociologist of Religious Studies and Head of the CHP Parliamentary Group.

As part of the ‘New Turkey’ series of the CEFTUS, this debate was chaired by Aysegul Yesildaglar.

Dr Cakmak began with his views of the meaning of the phrase “new Turkey”. The concept of a new Turkey is quite an old one, he explained, and if people want to talk about a “new Turkey”, it is important to recognise that the truly revolutionary changes to the country came some 90 years ago, with the foundation of the Republic of Turkey and the sweeping cultural and political changes implemented by Mustafa Kemal Ataturk. It was Mustafa Kemal Ataturk and the Republican People’s Party (CHP) who brought Turkey into the modern age and not the Justice and Develpment Party (AKP), Dr Cakmak asserted. Dr Cakmak emphasised the importance of the CHP in creating a freer, more open society during the 90 years of the Republic, characterising the CHP’s modernising effects on Turkish culture as an essential part of Turkey’s success. The influence of Turkish “soft power” and Turkey’s open intellecutal society, allowing a stable democracy in the Middle East, are results of CHP policy, he said. Renewed CHP leadership will be essential, he continued, in order to re-energise Turkish intellectual society, which will be needed to combat the influence of Islamic radicalism.

CHP MP Faik Tunay began after Dr Cakmak had finished his comments. Mr Tunay also disputed the AKP’s claims of having created a “new Turkey”. The AKP base their claims of having created a “new Turkey” on the enormous economic growth that has occurred during its time in office, Mr Tunay said, but the credit for this economic revolution really belongs with former Prime Minister and President Turgut Ozal (1983-1993), whose neoliberal restructings of the Turkish economy allowed industry to grow much more than it was able to previously. Mr Tunay credited the AKP with being more inclusive than the CHP had been historically, and suggested that historic military interventions had been detrimental to CHP popularity. He also expressed satisfaction at the way that the AKP had sustained and extended the economic reforms of the Ozal period. Mr Tunay then embarked on a more specific criticism of certain trends in AKP-era Turkey, specifically the unfair distribution of airtime to AKP campaign advertisements on the state television station TRT, the withholding of reports from the Court of Accounts (Sayıştay), which details government spending, from members of the Turkish Parliament, and what Tunay alleged were President Recep Tayyip Erdogan’s intentionally inflammatory comments on several occasions. Tunay detailed what he believed is a dangerous increase in political polarisation in Turkey between supporters and opponents of the AKP. He repeatedly reiterated his concern that President Erdogan had grown increasingly authoritarian and had concentrated power in himself and a small inner circle, excluding even the majority of the rank and file of his own party. He finished by comparing the rule of the AKP to that of the system of military tutelage that had previously existed in Turkey, saying “The actors have changed, but the roles are the same”.