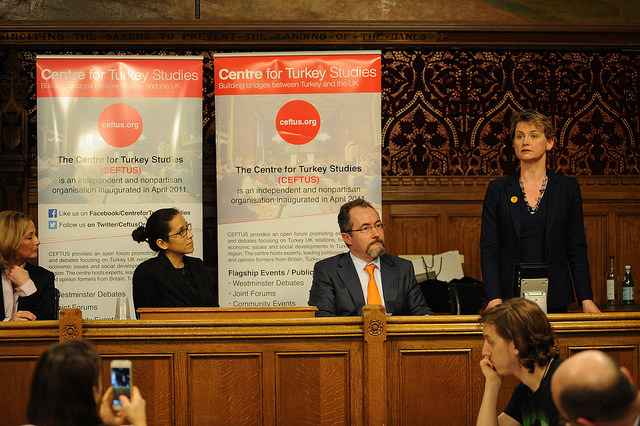 This Westminster Debate was kindly hosted by Yvette Cooper MP for Normanton, Pontecraft and Castleford and was chaired by Ms Doris Carrion of the Chatham House Middle East and North Africa Programme, whose expertise include Syrian refugees in Lebanon and Jordan, and the impact of the Syrian Conflict on  neighbouring countries.

Prof Dr Bendel began by referring to the European refugee crisis as one of the greatest problems of our times, and argued that this was a litmus test for EU member states to develop a united response. She argued that the values EU member states ascribe to themselves such as shared responsibility and human and refugee rights could serve as a compass to guide a uniform policy.

Prof Dr Bendel discussed three primary issues, namely co-operation with refugees’ origin and transit countries, combatting irregular migration and illegal trafficking, and EU member state solidarity. She noted that the UN High Commissioner for Refugees’ funds met around only half of what was initially earmarked which has meant that refugees in camps in neighbouring countries such as Jordan, have led to a lack of healthcare provision, causing large numbers of chronic illness sufferers to go without treatment. She added that this lack of funds had also prevented young refugees from receiving education as they often have to discontinue their studies and work or beg to support their families. On the issue of fighting against irregular migration and trafficking, she noted that among other measures, American drones and naval patrols have been dispatched to deal with people smugglers in the Mediterranean. On the solidarity of EU members, she noted that the European Commission has devised a re-settlement and relocation plan to allocate shares to various countries. Prof Dr Bendel added however that this policy had been met with bitter opposition from several member states. She continued, stating that this opposition has led to allocation of refugees to various countries has become  an allocation lottery, and that a cohesive common refugee policy would be a suitable alternative to the current lack of solidarity.

Prof Dr Sirkeci, discussed the demographic and financial implications of the refugee crisis. He opened stating that a great deal of discussion of the refugee crisis has been based in fiction, rather than fact. He stated that around 4.5 million Syrians are currently displaced, and 2.5 million of these are in Turkey amounting to around 3% of the Turkish population, alongside this, he added that around 800,000 have arrived in Europe over the last four years. Prof Dr Sirkeci noted that many refugees from Syria often have higher social capital and are often prone to risk-taking making them more entrepreneurial. He continued noting that most Syrian refugees are young, and  that only 3% of the Syrian population was over 60 years old. The remaining 97% he added will be eligible to work in the next decade or have already been workforce members. He stated that as a result of this, these refugees can benefit European countries and Turkey, as they can and have set up businesses in cities such as Istanbul for instance, and will ultimately pay taxes. He added that these newcomers could also fill gaps in the workforces of European countries with ageing populations. He concluded stating that these refugees can be contributors to the societies  in which they settle.

https://soundcloud.com/ceftus/yvette-cooper
Our host Ms Yvette Cooper MP joined the panel shortly. She stated that human stories must not be forgotten in the context of these crisis. She said for example that in Lesbos mountains of life jackets and children’s armbands are visible on the shore. She concluded stating that single countries operating alone will not be able to foster a solution to the crisis.

Prof Dr Ibrahim Sirkeci is Professor of Transnational Studies and Director of Regent’s Centre for Transnational Studies (RCTS), Regent’s University London. Sirkeci holds a PhD from University of Sheffield and BA from Bilkent University. His research covers migration, ethnicity, remittances, transnational marketing and consumers, labour markets and integration. Sirkeci is also the editor of several journals including Migration Letters, Transnational Marketing Journal, Kurdish Studies and Remittances Review. He authored several books on migration including Cultures of Migration, the Global Nature of Contemporary Mobility (U. of Texas Press, 2011), Migration and Remittances during the Global Financial Crisis and Beyond (The World Bank, 2012), Turkish Migration, Identity and Integration (TPLondon, 2015). Contact at http://www.regents.ac.uk/RCTS& http://sirkeci.co.uk & @isirkeci

Prof Dr Petra Bendel is Professor of Political Science and Academic Director at the Friedrich-Alexander-University of Erlangen-Nuremberg, Germany. Bendel studied in Heidelberg, Germany and Bilbao, Spain. She served as a researcher at the GIGA Institute in Hamburg, Germany and Heidelberg University as well as the University of Erlangen-Nuremberg. She is the author numerous publications on borders, refugees’ rights, asylum and integration policies in the European Union and abroad. She is also a political advisor on immigration issues. Contact at: http://www.regionenforschung.uni-erlangen.de/wir-ueber-uns/unser-team/petra-bendel/