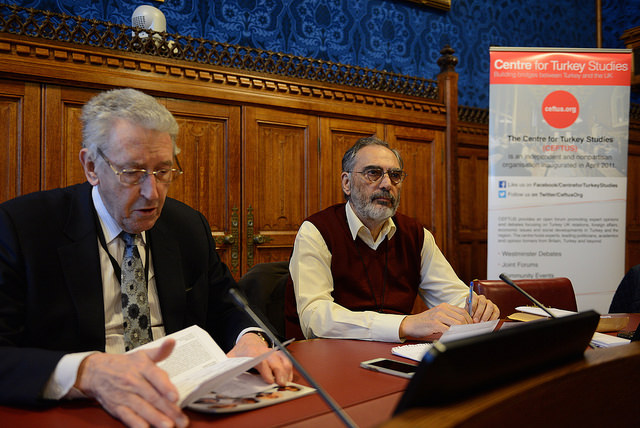 The Centre for Turkey Studies (CEFTUS) hosted a roundtable with Mr Etyen Mahcupyan on the transformation of Turkey over the last decade. Lord Howell of Guildford kindly hosted and chaired this roundtable discussion in the House of Lords.

Mr Etyen Mahcupyan in his opening remarks detailed the political reforms of the AK Party since it came to power in 2002 and claimed that the AK Party is the only political party that could bring change to Turkey and that can carry on implementing further reforms. Mr Mahcupyan analysing the history of the Turkish Republic argued that the state discriminated against religious and ethnic groups, especially the conservative Muslims, who constitutes the majority, before the AK Party. He said that AK Party’s policies paved the way for reforms in religiosity in Turkey as Muslims in Turkey have found new ways to define themselves and understand religion, which led to tolerance among religious groups and in public in general. He added that conservatives now are more moderate and that pluralism and liberal thinking have been enjoyed in the conservative circles more than ever. Mr Mahcupyan saying that he feels more like an Ottoman than an Armenian argued that the conservative Muslims as the majority group is the key group in Turkey’s path to democratisation, prosperity and freedoms.

Responding to questions regarding Turkish foreign policy in the region, Mr Mahcupyan said that Turkey considers ISIS as one of the greatest threats to its sovereignty and that Turkey would prefer to have a Kurdish neighbour only on the condition that the government and Kurdish political factions can strike a deal as part of the government initiated peace process. He added that about 700 to 1000 people from Turkey and approximately 300 from Europe joined ISIS, which, he said, proves the point that fighting against ISIS is not only Turkey’s responsibility but also Europe’s. Machupyan referring to over a million Syrian refugees in Turkey asserted that Turkey, following the legacy of Ottoman rule, has had an open door policy for peoples of Syria since the conflict begun and provided tremendous support for the refugees.

As a response to a question about Mr Mahcupyan’s thoughts on 1915 events, he said that what happened to Armenians in 1915 was genocide by definition, however, he said, genocide is a legal term, not a historical formulation.