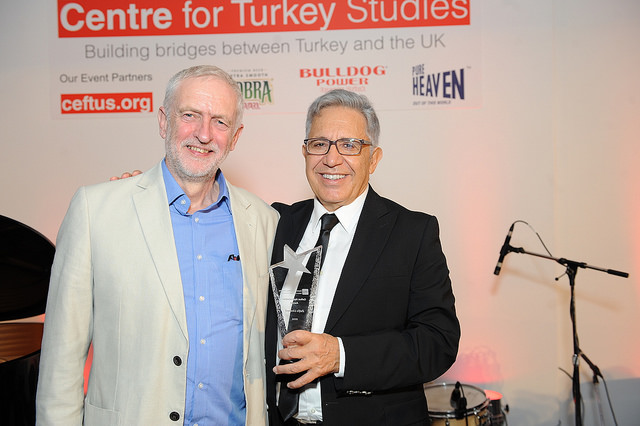 On Sunday October 9th 2016 the Centre for Turkey Studies (CEFTUS) hosted its Fifth Anniversary Gala with over 900 guests at the Westminster Park Plaza Hotel near the British Parliament. CEFTUS celebrated the achievements and contributions of the UK’s Turkish, Kurdish and Turkish Cypriot Community to Britain in business, education, politics, media, law, financial services and other areas with an awards ceremony. The evening featured a selection of musical acts including a piano and cello recital and performances by famous Turkish singers Yasar Kurt and Zulfu Livaneli who moved the audience when singing his classic song Yigidim Aslanim. The London-based Turkish singer/songwriter Olcay Bayir who was dubbed “an impressive newcomer to London’s vibrant global music scene” by Guardian Music also gave an excellent performance including a skillful rendition of the classic Anatolian folk song Uzun Ince Bir Yoldayim.

The event was attended by numerous figures from the political, business and cultural communities. These included politicians of various parties from both Britain and Turkey. High profile politicians such as the Labour Party Leader and MP for Islington North Rt Hon Jeremy Corbyn attended. Mr Corbyn gave a speech supporting CEFTUS’ work in providing a forum for free and open discussion over issues regarding Turkey, and how this has helped in promoting important human rights and values such as freedom of speech and self-expression. Other Labour politicians included George Howarth MP for Knowsley, Kate Osamor MP for Edmonton, John Spellar MP for Warley and Graham Stringer MP for Blackley and Broughton. The Conservative Party was also represented by Kwasi Kwarteng MP for Spelthorne and by a delegation from the Conservative Muslim Forum. The Scottish National Party was represented by Patrick Grady, MP for Glasgow North and Martyn Day MP for Linlithgow and East Falkirk, and the independent MP for Rochdale Simon Danczuk was also present. Mayors of various London boroughs including Cllr Ali Gul Ozbek of Harringey, Cllr Saleha Jaffer of Lambeth and Cllr Gurdial Bhamra of Redbridge also attended.

Figures from across the political spectrum in Turkey also attended including the former Justice and Development Party MP Mehmet Emin Ekmen, Republican People’s Party MP Mustafa Sezgin Tanrikulu, and Berdan Ozturk, an MP of the Peoples’ Democratic Party. The attendance of figures of various British and Turkish parties attests the significance of CEFTUS to Anglo-Turkish relations as proud champion of dialogue between all groups.

A speech was made by the director and founder of CEFTUS, Mr Ibrahim Dogus, in which he added:

“When we established CEFTUS five years ago we had two clear goals.Firstly, to provide an independent, non-partisan forum for discussion about Turkey and the region for the British people, and for Turkish, Kurdish and Cypriot communities. And secondly, to create dialogue between experts from Turkey and the UK, to build bridges between the two countries and their peoples. Since then, we have done all this and more. We are now holding regular events, which inspire fruitful debate, with key commentators and actors in Turkish, Kurdish and Cypriot politics, and in Turkey-UK affairs. We are recognised as the leading name in Turkey-UK relations in Britain and Turkey.”

He also expressed hopes for the future, explaining that:

“There is so much more we can achieve if we stick to our aim of promoting discussion and dialogue. And now we are starting our own research and consulting activities, marking a new stage in our development.”

The gala also received delegations from leading companies and sponsors such as Cobra Beer and featured a recorded message of support from the chairman Lord Karan Bilimoria CBE. Other notable business people included the Managing director of Molson Coors Phil Whitehead who gave a speech and presented an award. Dr Rami Ranger CBE Chairman of Sun Mark Ltd also praised the role of CEFTUS in promoting the integration of the Turkish-speaking community in the UK, and Just Eat Managing Director Graham Corfield. The event was also sponsored by the companies of high-profile members of Brtiain’s Turkish, Kurdish and Turkish Cypriot community including Mr Altan Kemal of Alton & Co and Metin Pekin of XPO Online.

The event overall summarised the many of achievements of CEFTUS in its first five years since its inauguration in 2011 as a non-profit organisation in building bridges between Britain and Turkey, providing a space for dialogue and discussion of the issues of the day and enhancing the profile of Turks, Kurds and Turkish Cypriots in UK public life.

The winners of the Community Achievement Awards 2016 were as follows:

Businessman of the year

Businesswoman of the year

Can Topcu of Tarshish