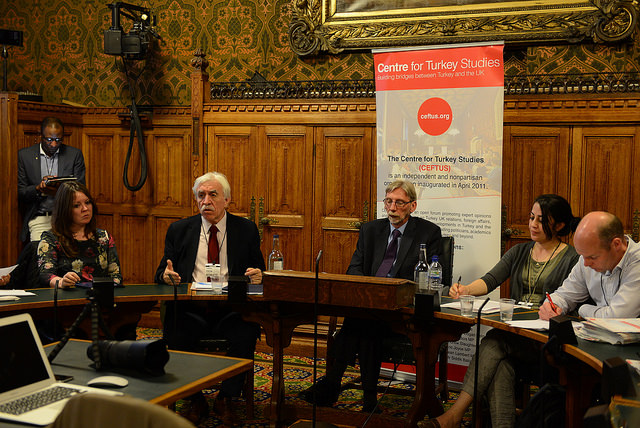 The forum was hosted by Labour MP Sharon Hodgson for Washington & Sunderland West. The forum came as the hundred year anniversary of the Sykes-Picot agreement nears. The Sykes-Picot agreement saw the defining of the borders of Iraq and Syria by Western powers. The agreement drastically altered relations in the region, and globally. Starting from the Iraq War in the early 2000’s, shattered borders have been reclaimed by Daesh. At the same time Kurds in Syria, denied autonomy at the beginning of the century, have become key actors in their fight for survival and democracy against IS. In Turkey, Kurds have suffered the consequences of failed peace talks between the state and the Kurdistan Workers Party (PKK).

Mr Cengiz Candar stressed that, on the 100 year anniversary of Sykes-Picot, it remains clear that all sides are against the superficial boundaries drawn then. After capturing Mosul, Iraq, the Daesh established their ‘caliphate’ and removed the frontiers of Sykes-Picot. Kurds are the main fighting force on the ground against Daesh, and also share the longest border with them. The Kurds are also against Sykes-Picot, Mr Candar said, which divided a potential nation, a community, and identity between two imperial territories. By the divisions that happened under Sykes-Picot. Kurds came to represent secessionist tendencies, Mr Candar argued, manipulated by foreign forces to dismember Turkey and Syria. The 1925 revolt in Turkey was suppressed, but never removed from memory or history, which has come to repeat itself. Developments since the end of the Cold War saw a new paradigm in Kurdish affairs emerge, new dynamics of the Kurdish Question. The Kurdistan Regional Government (KRG) emerged as a quasi-proto independent state in Iraq. Kurds have come to perform new roles in history, Mr Candar said, which has become a more widespread phenomenon since the developments in Rojava. Without the Kurds, Mr Candar claimed, there can be no Middle East to be redefined or shaped. The Kurds are major political players thanks to their sacrifices and vitality, and remain a component of the international system in confronting international threats to stability and security.

Dr Zeynep Kaya spoke on the peace talks in Turkey. What does the way it ended say about the future? The peace talks were not a real peace process, she said, they lacked guarantees, international brokers, and incentives on both sides. It was a ceasefire process that looked like a talk, and ultimately was a missed opportunity. The Turkish government will only negotiate when the PKK surrenders and gives up arms. The Kurds, on the other hand, believe the government has deceived them. While there were roots of reconciliation there, Dr Kaya argued, the distrust ran deeper on both sides. She called for a belief in politics, in discussing the Kurdish Question on a democratic level to regain this misplaced hope. The impact of relations within Syria make the possibility for a new peace process less likely, Dr Kaya said. It has altered political and Kurdish dynamics. The presence of the PYD has increased the PKK’s appeal and strength in Turkey, with Kurds in Turkey becoming increasingly sympathetic to what is happening in Rojava. The Syrian dimension has impacted Turkey, pushing the Kurdish Question away gaining a platform in democratic politics

Robert Lowe spoke of the past and future of Rojava. Six years ago, he said, no one was talking about Rojava, an area that historically had little discussion compared to other Kurdish regions. World War I saw imperial western powers imposing provisions on multiple ethnicities in the Middle East. In the early 1920’s, Mr Lowe explained, Kurds in Syria gained some measure of autonomy, which was quickly lost by 1925. The situation remained relatively stagnant until 2011, when the grass-roots rose to fight the artificial, unhelpful structure of the nation-state. The Assad regime, he argued, would have collapsed but for the failings of international western powers to intervene. Mr Lowe offered up some possible solutions to the conflict in the Middle East: a bottom-up government by the people and for the people, in which all of Syria is de-centralised. Not fragmented, he stressed, that does not suit the people. Rojava, he argued, can help the rest of Syria, through their history and ideology of tolerance, inclusion, and representation. However, international support remains shallow. The future for Rojava, according to Mr Lowe, could go one or two ways. Either the war will continue and Rojava will be defeated, or Rojava will continue to grow, and be included in some sort of peace agreement.

Mr Cengiz Candar studied political science and international relations at Ankara University. He began his career as journalist in 1976 in Turkish daily Vatan after living some years in the Middle East and Europe due to his opposition to the regime in Turkey following the military intervention in 1971. An expert for the Middle East (Lebanon and Palestine) and the Balkans (Bosnia and Herzegovina), Candar worked for the Turkish News Agency and for Turkish newspapers Cumhuriyet, Hürriyet, Referans and Güneş as a war correspondent. Currently, he is a columnist for Radikal. Candar served as special adviser to Turkish president Turgut Özal between 1991 and 1993. His interest was drawn to the events during the ethnic unrest in the Balkans between 1993 and 1995. From 1997, Candar lectured for two years on “History and Politics in the Middle East” at Bilgi University in İstanbul. Between 1999 and 2000, he did research work on “Turkey of the 21st century” as a Public Policy Scholar at the Woodrow Wilson International Center for Scholars and a Senior Fellow at the United States Institute of Peace. His description of the 1998 events in Turkey as a “post-modern coup” gained notice internationally, though Radikal columnist Türker Alkan had used the term two weeks earlier.

Dr Zeynep Kaya is a Research Fellow at the LSE Middle East Centre. Her expertise is on the international relations of the Middle East, with a focus on Kurdish politics, nationalism, self-determination, sovereignty and gender. She is currently completing her research project on international-local interactions to support gender mainstreaming in Iraqi Kurdistan with a focus on the Women, Peace and Security agenda.

Mr Robert Lowe is the Manager of the Middle East Centre. He joined the centre when it opened in 2010. Previously, Robert was Manager and Research Fellow, Middle East and North Africa Programme, Chatham House. He held a Research Fellowship from The Leverhulme Trust from 2008 to 2010 and was an Honorary Fellow at the Institute of Arab and Islamic Studies, University of Exeter, from 2008 to 2010.