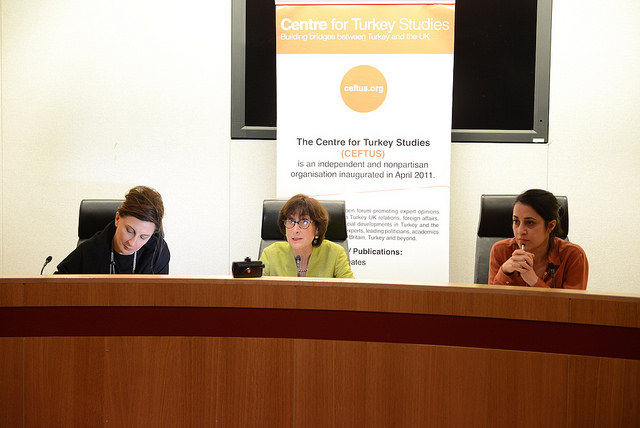 Dr Lenore G. Martin opened her speech by analysing  why under the Justice and Development Party (AKP)  Turkey has found itself having strained relations with Russia and its NATO allies. She began by discussing architect of AKP foreign policy and former Prime Minister Ahmet Davutoglu’s strategic depth foreign policy that led to improved relations between Turkey and its Middle Eastern neighbours, and allowed Turkey to mediate between Syria and Israel and to become increasingly engaged in the affairs of the region. She explained that Turkey was able to foster stronger ties with both Israel and the Assad regime in Syria. She added that Turkey expanded its trade wherever possible in the Middle East and that these policies were very effective. She argued however that the AKP’s ideological leanings had stunted these developments as demonstrated by Turkey’s poorer relations with neighbours and nearby countries for instance when Israel invaded Gaza in 2008 and with the outbreak of the Syrian civil war in 2011, which also damaged relations with Turkey’s Western partners who came to view Turkey as an Islamist militant supporter and therefore an unreliable ally. Dr Martin also added that Turkey’s over reliance on its geographical location had served as a double-edged sword, making it both strategically critical but also exposing the country to threats to its national security.

Dr Martin built upon her argument regarding the AKP’s philosophical leanings isolating Turkey internationally by noting the close ideological outlook that the party shares with Muslim Brotherhood groups in the wider Middle East. She referred to Turkey’s Kurdish problem as the country’s Achilles heel, that has left many dead within Turkey, and also made it vulnerable to manipulation by neighbours Russia, Greece, Iran and Syria.  Dr Martin added that even though efforts have been made in the direction of re-establishing good ties with Russia, Iran, Israel and others, Turkey’s Kurdish problem has left the state dealing with insurgencies within its own borders. She also added her view that the Kurdistan Regional Government (KRG) in Iraq, could continue to be a useful partner for Turkey in dealing with its own Kurdish issue, and be part of a “soft solution” that could allow for free movement between Kurdish regions in various countries, and other similar arrangements, that could create a consensus among different national groups without the need to change borders.

Dr Nuray Mert reiterated the notion that foreign policy matters are strongly linked to domestic policy, and that generally if one is unsuccessful, the other is likely to be equally so. She stated that in the Cold War period, Turkey’s foreign policy had been simple, Turkey was a NATO member and American ally. She added that following the end of the Cold War however, that Turkey struggled to adjust to the new circumstances, of conducting a more multi-dimensional foreign policy. She added that during the Turgut Ozal presidency, that Turkey grew more ambitious and sought to play a more active role in world affairs during the 1990s. She continued, stating that there was a view that Turkey could play a leading role among post-Soviet Turkic republics in Central Asia and the Caucasus, alongside other ambitions of Turkish leadership in the post-Ottoman space.

Dr Mert added that the politics of Turkey in the last 15 years under the religiously conservative, often called Islamist AKP has a historical basis in the Republican modernisation period and the harsh secularism and authoritarian governance that accompanied it. She added however that the AKP’s political tradition is also one an authoritarian one. She concluded therefore that both of Turkey’s main traditions are somewhat based in authoritarianism. She also mentioned on this issue that in her view, democratic governance was in fact the exception, rather than authoritarian systems which remain common throughout the world.

Prof Dr Nuray Mert is a political scientist, columnist and former TV presenter from Turkey. She is a lecturer at the Department of Economics at University of Istanbul, and writes regular columns for national newspapers on current affairs, including Hurriyet Daily News. She hosted a TV show on current and political affairs at a national channel, and this was taken off air after the then Turkish Prime Minister Erdogan publicly criticised her. Her doctorate thesis was on ‘Secular Thought in Early Republican Period’.  In 2012–2013, she was an International Scholar in Residence at the Stanford Humanities Center. Her published books include Hep Muhalif Olmak (Always in Opposition) (2001) and Turkiye’de Sivil Toplum ve Milliyetcilik (Civil Society and Nationalism) (2002).

Dr Lenore G. Martin is Professor and Chair of the Department of Political Science, at Emmanuel College in Boston, and an Associate of both the Weatherhead Center for International Affairs and the Center for Middle Eastern Studies at Harvard University. She chairs the Seminar on Turkey in the Modern World and co-chairs the Middle East Seminar, both at Harvard. She has received three Fulbright awards, the last one in 2010 as a Senior Fulbright Researcher at Middle East Technical University, working on Turkey and the Middle East. She has written books and numerous articles analyzing national security in the Gulf, the larger Middle East and Turkey, including: The Unstable Gulf: Threats from Within, Lexington Books 1984, New Frontiers in Middle East Security, edited, St. Martin’s/Palgrave 1999 and 2001, and The Future of Turkish Foreign Policy, co-edited with Dimitris Keridis, MIT 2004. In 2010, as a member of the Boston Study Group on Middle East Peace she co-authored, Israel and Palestine-Two States for Two Peoples: If Not Now, When? an on-line book with the Foreign Policy Association. In 2012 and 2016 she spent the Trinity Term at St. Antony’s College, University of Oxford as a Senior Associate Member and Visiting Academic respectively.