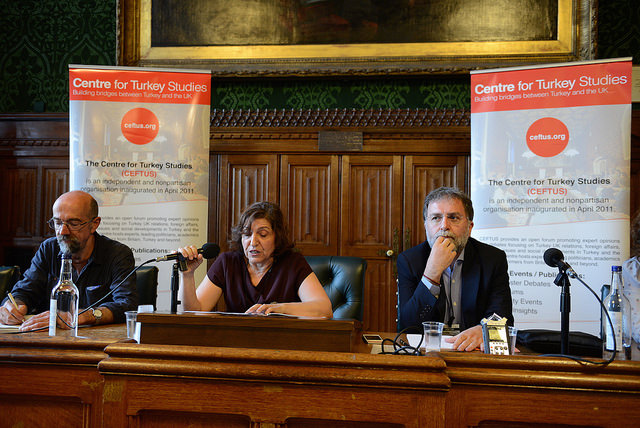 This Westminster Debate was kindly hosted by Neil Coyle, Labour MP for Bermondsey and Old Southwark. The keynote speaker was Mr Ahmet Hakan, Turkish columnist and TV presenter. Mr Ahmet writes daily columns for Hurriyet and has presented the popular current affairs programme Tarafsiz Bolge on CNNTurk since 2005, as well as publishing a number of books.

At present, there are a number of political changes on the horizon in Turkey, in terms of the presidential system and the placement of the constitution. If such changes happen, many are concerned that the authoritarian power of President Erdogan will increase.

Mr Hakan spoke largely about the current government administration in Turkey. When the Justice and Development Party (AKP) were elected in 2002, he said, they had promised to ensure a conservative, pious Muslim community could participate in society and gain their rights and freedoms. Whilst they came into power with this promise, Mr Hakan explained, you can no longer talk of a party with a cause. The AKP has become a one-man party, and no longer even tries to conceal this fact itself. Their initial promise to ensure an Islamist movement did not happen, but rather what resulted was an authoritarian man consolidated in power. Mr Hakan compared this situation in Turkey with the Hungarian situation, and what many fear may happen in the US with Donald Trump. In Turkey, he claimed, the regime is inconsistent in what it is and what it wants. At times, he said, it has a neo-Ottoman agenda, at times it claims to represent the oppressed, at some times it appears ‘macho’. Many Islamist intellectuals, Mr Hakan said, have been incorporated into the ruling party’s regime. The media has been silenced, directly or indirectly under government control.

Mr Hakan gave a number of interesting insights during the question and answer session. The legal system is not strong in Turkey, he explained. There is no tradition of independence, all it knows is either military intervention or political coups. This has resulted in a great void and therefore no clear idea of what possible legal sanction could be introduced to challenge Erdogan’s power. The AKP has become a one man party, flexible and opportunistic in ideology, but there are still various factors that hold it together such as people being given roles and jobs that they assume give them power and influence. When asked if, hypothetically, AKP would win an election in Turkey tomorrow, Mr Hakan said that they would. According to Mr Hakan this is down to a disorganised opposition, momentum, and the fact that the mentality of Erdogan is close to many, many people in Turkey. Breaking AKP momentum, Mr Hakan expressed, would require mass support, weakness of opponents, success with nationalists, and utilising religious views.

Mr Hakan also voiced his opinion on the opposition in Turkey. He commended the success of the HDP in the last election, however he said that they should have had more courage to act politically and no one from the party has given a satisfactory answer to why they failed to do this. Claims of ‘neo-Ottoman’ project are simply a way to motivate people, in the same way IS (also known as DAESH) use the idea of ‘caliphate’, it is not a serious project, Mr Hakan said.

As the UK is facing a vote on whether or not to leave the European Union, Mr Hakan was asked on Turkey’s relationship with the EU. The EU will never take Turkey in its current state, Mr Hakan said, but they should retain relations with Turkey. If relations broke down, Mr Hakan warned, the situation in Turkey would deteriorate. Erdogan would, Mr Hakan suggested, be pleased if relations with the EU broke down. It simply slows him down. He may use the refugee crisis to gain money and influence, but Mr Hakan state that he does not believe that Erdogan has any interest in joining the EU.

Speaker biography
Ahmet Hakan Coskun is a Turkish columnist and TV presenter. He studied at Uludag University in Religious Studies. He wrote stories when he was a student at the university. Some of his stories were published in Yedi Iklim Journal. Between 1993 and 1994, he worked as a journalist in TGRT TV channel. He was part of the team of news programme called “Yanki”. Whilst Kanal 7 was in the process of establishment, he transferred to this TV channel as a journalist. After he worked as a journalist, he worked as Director of News and Current Affairs and reporter for Kanal 7. In the following years, he prepared the Iskele Sancak programme and he published a book containing several episodes of this programme. In 2004, he resigned from Kanal 7. He joined the Yeni Safak daily as a columnist and afterwards he worked for the Sabah daily . Currently, he writes his columns for the Hurriyet daily and presents a popular current affairs programme “Tarafsiz Bolge” on CNNTurk since 2005. His published books are Neden Milliyetcilik? (Why Nationalism?) (2001), Ceteler, Mafya ve Siyaset (Gangs, Mafia and Politics) (2001),  Sivil, Dayanılmaz Bir Yurek (Civilian, An Unendurable Heart) (1999).